Twitter Facebook Pin It Email Article
Prev Should You Allow Your Tween or Teen to Use Snapchat? Next Life’s Not Fair, Whether I Help My Teens or Not 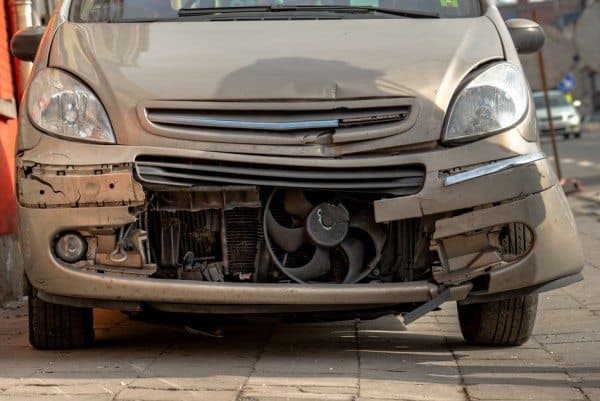 Not Found in the Baby Book: Teen’s First Fender-Bender

I was 17, and I’d had my driver’s license for a year… maybe a year and a half. I used to have doctor’s appointments in a city an hour from home, because we lived in a small town and this particular specialist merited the drive. My father used to take me to my appointments, but I had my license. I could drive myself, I told him. For a few visits, he let me drive, but he came with me. Finally my parents agreed that I could go on my own. It was my longest solo trip, and I felt very grown up.

They made me leave super early for my appointment—just in case there was traffic—and I arrived so early, it seemed silly to sit and wait for the 45 minutes or whatever it was. I was going to be starting college just up the street from the doctor’s office in a few months; I thought I’d just drive a few loops around campus to familiarize myself with the layout. I had all that extra time.

The first loop was uneventful. I checked my watch. I still had plenty of time. I decided to do a second loop, a different way. And to this day I can’t tell you for sure what happened—I thought, at the time, that the other driver was making a right turn on red and didn’t see me, but in retrospect, there was an odd little intersection where there were two sets of lights very close together, and I may indeed have missed the second set and run a red light—but one moment I was driving down the road and the next I was bouncing off my window as this other car T-boned me on the passenger side.

It felt like forever, the crash, the noise, the mental inventory of what just happened? can I move? am I okay? are THEY okay??, but finally I looked around and realized my car was now in the middle of an intersection and probably should be moved out of the way. So I tried to move it, but it no longer drove. I was sobbing, though I don’t know that I realized it yet, and I got out of the car and went to talk to the other driver. He was okay, thankfully, and I suspect he was primed to be very angry until a small, sobbing kid approached his window. He got out and awkwardly patted my shoulder and asked if I was okay, and told me not to cry, we were both alright and it would be okay.

This was before cell phones, of course. Somehow, the cops showed up (I assume someone passing by called?), and a few passersby stopped to comfort me as I blubbered about how I didn’t even live there, I lived an hour away, and I was going to miss my appointment and oh, God, my mother is going to kill me. Everyone was very nice about it. Eventually one of the cops let me walk over to the doctor’s office (we crashed about two blocks away) to let them know what happened and to call my parents. My father made the drive to come and get me and deal with everything, and it felt like the longest day of my life.

The car was totaled. My father was very reassuring about it all—we’re just glad you’re okay, things can be replaced—but my mother asked me why I hadn’t just gone straight to my appointment. I explained that I had all that extra time and I was just trying to familiarize myself with the campus and I thought it was okay, but she was angry with me. “You had no business driving around,” she said. So: my fault. Whether it was my fault or not, it was my fault. This was a fairly common position for me as a kid, so I can’t say I was surprised. I just added it to my “I screwed up again” pile, even though I felt it was unfair.

Accidents happen. That was a long time ago. I’ve been in a few other accidents since then—occupational hazard of driving for coming up on 30 years—and while accidents are always scary and difficult, I remember that first one with crystal clear clarity. Oh no, what just happened? and my mom is going to kill me.

So when the phone rang yesterday and my 17-year-old daughter was on the other end, sobbing, saying she’d had an accident, somehow I went into Zen parenting mode. Are you okay? Have you both pulled off the road? Are you sure you’re okay? Take a deep breath, honey. It’s alright. Here’s what we’re going to do. Go talk to the other driver and see if they’re okay. Stay on the phone with me. I’m coming.

My husband and I were on opposite sides of town and ended up both going, unsure of which one of us could reach her first. She was badly shaken up. There was an elderly passenger in the other car and so an ambulance was called as a precaution, and my poor kid was convinced there was now an injured or killed “old person.” (Okay, it was hard not to laugh at that part.) She kept crying and apologizing and fretting and both of us kept just telling her: It’s okay. Things are fixable. We are not worried about the car, we’re worried about you. Thank goodness you’re okay. Thank goodness no one was hurt. The car is not a big deal. Money is replaceable, people aren’t. She was inconsolable, and even after we got home, the tears kept rolling down her cheeks, and she whispered, “I should’ve been able to swerve or something.”

I taught this child to drive, and while I will be the first to tell you that she can be both reckless and thoughtless in countless ways about a variety of life’s day-to-day happenings (as are most teens, just to be clear), she is perhaps the most cautious driver I’ve ever known. She’s a great driver. So as she beat herself up, I sighed and hugged her, and finally I held her at arms’ length and made her look me in the eyes.

“Were you texting?” Horrified, she shook her head no. “Were you blasting the radio and dancing?” Again, no. “Were you talking on the phone? Digging in your purse? Staring out the side window at something shiny?” Of course not. “You had an accident. They call them accidents because they’re accidental. If it happened because you were doing something wrong, then learn from that and don’t do that thing again. But this happened because sometimes accidents happen even when we do everything right, so stop beating yourself up. You were lucky. We were lucky. No one was hurt. Their car was barely scratched. Your car is fixable. Things happen. This could’ve been so much worse, but it wasn’t. Let’s focus on that.”

The car will be fixed. Life will go on. I held my firstborn close last night and told her the story of my first car accident, and how I was far from home and the car was totaled, and told her that now I can look back and laugh, and someday, she will, too. She didn’t seem to believe me, but she will. We all will. Eventually.