Twitter Facebook Pin It Email Article
Prev Separation Anxiety in a 9 Month Old Next The Grabby, Grabby Baby (Is This Behavior “Normal”?) 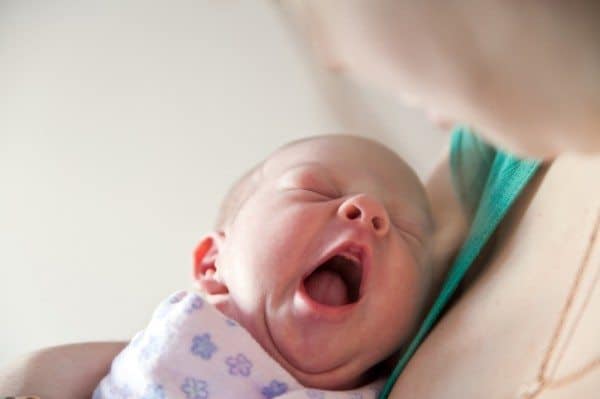 Newborn Sleep: When Everything Falls Apart at Once

Amy, please help! Please please please. I am lost trying to diagnose my second daughter’s myriad sleep problems. Can you help me decode this situation?

Our baby just turned two months old, and her first six weeks were pretty textbook. Woke a few times a night to nurse, went back to sleep, no complaints from me. She was crazy consistent in the times she woke up and sleep was slowly regulating.

Then she got sick – cold, bad fever, ear infection. And sleep completely fell apart. Struggling to go down, up every 45 minutes to an hour, etc. Her pediatrician also ID’d she seems to have a milk protein intolerance that was leading to constant digestive struggles, making her miserable.

We got through antibiotics, cut out dairy, soy, etc. Sleep is getting…better? Except not really. Every night with this baby is TOTALLY different. Some nights she goes down ok but wakes up every 30 minutes (literally). Some nights she fights bedtime for two hours but will then sleep for four or five hours in a stretch. Sometimes it’s the worst of both those scenarios. I am at my wit’s end and, a couple weeks out from going back to work, I’m desperate to establish some sleep reliable stretches of 3+ hours at least.

The only consistent pieces in this puzzle:

1. She is very dependent on her pacifier and we have to go in to put it back in her mouth. Some nights it’s a just couple times up front; some nights it’s dozens of times throughout the night.
2. She totally breaks down around 6:30pm-8pm. We’re aiming for a roughly 8pm bedtime, but should we be putting her to bed earlier if she’s falling apart tired at 7? Isn’t that early for a two month old? I’m afraid she’ll be up for good at 3am.
3. I’m still only nursing her 2-3 times in a night. The other wakings are clearly not food related. She often seems to be struggling with gas or digestive issues. She writhes, tosses, turns, claws at her face all night long.
4. I am exhausted.

Where should we start in addressing this mess? Should we work on ditching the pacifier? Focus on better naps, which are also bad and get worse throughout the day? I’m trying so hard to establish a bedtime routine, but when she’s screaming bloody murder and HATES the bath it’s impossible to maintain any calm routine. I’m doing “drowsy-but-awake” but honestly don’t have a choice – she won’t nurse or rock to sleep and stay asleep.

First and foremost: BREATHE. It’s going to be okay. Two-month-olds are (by and large) terrible and wildly inconsistent sleepers. Even without the illnesses and digestive issues, somewhere around six and eight weeks is when all hell breaks loose, and all smug parents who bragged about their two-week-old sleeping through the night on the Internet are sufficiently and wholly humbled.

So while I can’t promise you that there’s just one simple trick that will Fix Everything Immediately, I can offer some suggestions along with my copious sympathies, because gahhhhhh I can still FEEL that foggy haze of bone-deep exhaustion you’re going through right now. And it’s been YEARS.

So let’s start with those puzzle pieces you listed:

1. Pacifiers.
Not a huge fan of ’em, because I swear for every problem they solve, another problem gets created. (See: the never-ending all-night pacifier retrieval dance, the inevitable weaning issue, etc.) That said, if the pacifier was getting you to the three-hours-in-a-row sleep goal, I would NEVER discourage you from sticking with something that works. But…it’s not really working like that for you, and she’s a loooooong way from being old enough to retrieve it herself. Pacifier weaning is never fun, but it is typically easier when it’s done earlier vs. later. (A newborn will forget about it fairly quickly, while a toddler will fight you with tears and tantrums.) Plus, there’s something to be said about making the change when everything’s kind of a mess already vs. trying to wean her off it when you’ve gotten used to consistent sleep patterns and thus feel like you’ve blown up your life for no good reason. But I’m probably going to remain fairly wishy-washy on this one: If you feel like things can’t really get any worse than they are now, feel free to add pacifier weaning to the sleep dumpster fire.

OR: Consider moving her (TEMPORARILY) into your room at night, using a bedside/arms’ reach co-sleeper/bassinet that will allow you to retrieve and return her pacifier without having to get up and out of bed. (We kept all three of our newborns with us until about three or four months old so their inconsistent sleep/nursing patterns weren’t quite so destructive on our own. I personally believe two months is still solidly in the “do whatever it takes to survive and worry about consistency/proper habits/sleep schedules in a few more weeks” window.)

2. Bedtime Schedule.
Yes! Put her to bed earlier! Don’t keep her up until an arbitrary bedtime! Put her down to sleep BEFORE she’s “falling apart tired,” because by that point it’s already too late: She’s overtired and her sleep cycle will be restless and interrupted. She probably won’t go down for the NIGHT at 6/6:30, but I bet she’ll sleep in longer, calmer stretches if she does. You can even consider that early hour as her final “nap” (most babies this age are taking three to four naps a day) instead of “bedtime.” Some babies are great about settling into an 8 p.m. bedtime schedule right from the start — others not so much, at least not while still this young. An overtired, melting-down infant is not going to sleep well at all. Follow her cues at this stage instead of the clock.

3. SWADDLE HER.
All that tossing and turning and face-clawing and screaming bloody inconsolable murder can be SHUT DOWN with a snug, safe swaddle. Go buy a Miracle Blanket (or three) right now. Go watch a YouTube tutorial (or two) on how to use it. This isn’t like those big square hospital blankets that required your nurse to do some kind of weird dark magic wrapping trick  vs. you attempting a sloppy swaddle that your baby broke out of in 10 seconds flat. It’ll stop all the writing and scratching and keep her from startling herself awake with her own little limbs that she’s still learning how to control. The Miracle Blanket can also be used on her upper body only — leaving her legs completely free or just loose in the bottom sack portion, which seems to be the preferred swaddling method for very gassy babies. (I also assume your pediatrician has talked about possible OTC gas drops or gripe water to address her ongoing digestive issues.)

4. I am so sorry and this will pass.
She will sleep. She might take longer than your first baby to sleep on a set schedule, but for now, follow her lead and her sleep cues. Put her to bed when she’s tired, before she breaks down, and don’t feel like you MUST incorporate things she hates (like a bath) into a bedtime routine at time that clearly isn’t working for her. Start eyeballing the 2-3-4 schedule* for structuring her naps during the day — although at this age it’s likely that the “4” will be more of a third nap rather than bedtime. (It’s probably right around the time she’s melting down! ) And worst-case scenario: You go back to work without any real established nap schedule, only to leave her with a magic daycare provider who is a bona fide expert in getting babies onto a real established nap schedule!

*The 2-3-4 schedule in a nutshell: Baby’s time awake during the day becomes gradually longer after each nap. First nap: Two hours after waking up in the morning. Second nap: Three hours after the end of the first nap. Bedtime (or third nap): Four hours after the end of the second nap. This schedule keeps baby from getting increasingly overtired throughout the day, and  — if they’ve gotten their days and nights mixed up — will help you shift their longest stretch of sleep to where you want it: Overnight.

1. Swaddling & SIDS: A Common Sense Look at “That Study”
2. Newborn Sleep Habits: What Should You Worry About & When?
3. Newborn Sleep Wars: Reverse Cycling Edition