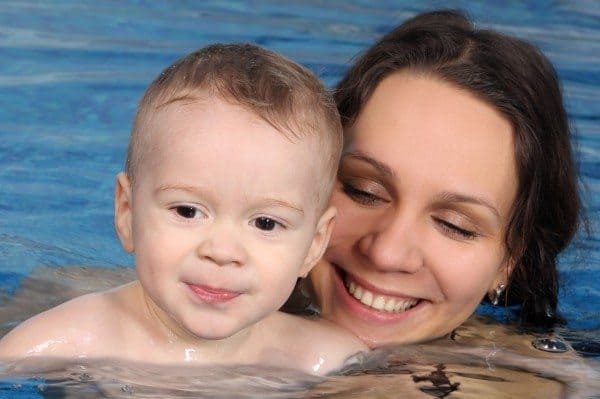 So you (and countless others around the internet) have convinced my husband & me to cloth diaper. We have 12 bumgenius 4.0 diapers (with snaps!) on their way to our house now.

My question is about cloth swim diapers- yes or no? Which one? One diaper costs the same as a package of Little Swimmers, so it seems like a good deal. Please tell me what to do on this one!

We’ve covered cloth swim diapers ’round these parts before — here and here, specifically. But since we’re approaching That Time Of Year and I know from experience that I’ll likely get multiple questions about them, let’s just revisit the topic one more time anyway.

Yes, we use cloth swim diapers. Yes, we highly recommend them.

Not only are they much cheaper and less wasteful than blowing through an entire pack of disposable swim diapers during a day or two at the beach, I actually find them to be easier. I know, right? That goes against everything you ever thought you learned about the cloth vs. disposable debate. While most of us converts are more than happy to tell you that cloth diapering is not as hard as you’d think, few of us would ever be able to look you in the eye and tell you it’s easier than balling up a dirty disposable and tossing it in the nearest trash receptacle. Those people are dirty lying liars.

But for swim diapers, it’s different. I’m sure it still comes down to personal preference, but I always had a lot of problems with the Huggies and Pampers swim offerings (besides the price), even before we ever considered switching to cloth diapers:

1) I didn’t like the fact that they pulled on like underwear, which can be crazy difficult depending on your child’s age and cooperation level…not to mention trying to pull on a fresh one down at the beach, dealing with sand and sunscreen-y thighs. Our reusable swim diapers (Bummis Swimmis) go on with velcro tabs. I can put them on my kid either lying down or standing up. (And since they don’t get anywhere near the level of daily wear-and-tear of our regular diapers, we’ve never had a problem with the velcro wearing out. Even the ones Ezra has outgrown look brand new, and ready for another go with baby #3.)

2) I didn’t like how often I had to change them. It’s one thing to deal with disposable swim diapers for a 30-minute baby-and-me swim lesson at the Y — put one diaper on, rip off and toss afterwards — but if you’re hanging out poolside all day with an active toddler, or at the beach with a baby who wants in the ocean, out of the ocean, no, back in the ocean!, it’s ridiculous how many of those pricey disposables you can end up blowing through. Once your baby has gone in the water, the diaper swells up and sags and bags and needs to be changed. The reusable ones can basically be worn and reused until your baby poops. (If your baby is going to be out of the water for an extended period of time and going naked isn’t an option, you might want to swap the swim diaper for a real one, since it won’t absorb any pee. But you can then reuse the same swim diaper for a later dip in the water. Just rinse it out. Or not. I won’t judge.) (I’ve also been known to shove a prefold or insert into the swim diaper just to buy myself some time and save a full diaper swap-out.)

3) I didn’t like how saggy and heavy they got. I have skinny-hipped kids, and even though the swim diapers are only lightly absorbent (which is a plus for catching accidents BEFORE you go in the water, unlike reusables), they would get so darn waterlogged after a swim that they’d often slide right off my boys’ butts. Not cute. Or very comfortable looking. And it was ALWAYS at this point — after the diaper was at capacity and the leg elastic shot to hell — that my children would decide to poop, and there was never any hope of actual containment. Cloth swim diapers hold their shape and elasticity no matter what.

4) I didn’t like the rashes. Your mileage may certainly vary, but my kids got more rashes after using disposable swim diapers. They do have very sensitive skin, but I’ve found that when we’ve used the cloth swim diapers exclusively (vs. trips where we’ve half-assed it because of laundry concerns), we get ZERO rashes or chafing problems from sand. Now, we just wash them with our bathing suits or just soak them in the sink or give them a good hot rinse in the shower — they aren’t nearly as high-maintenance as typical cloth diapers in the laundry department, since you don’t need to worry about residues harming their absorbency levels.

We own three or four, I think, and this is more than enough for regular trips to the pool and long weekends at the beach. If we were just talking once or twice-weekly trips to the pool or swimming classes, you could probably get away with even less. Basically one to wear and one for backup in case of poop.  I just bought some Bummis in the next size up because I assumed last years’ wouldn’t fit again…but we probably could have gotten away with them, though, since the velcro tabs allow for a big size range. (Plus Bummis run BIG, just FYI.)

This summer will be interesting, since it will be my first ever with a very new newborn (my first two were born in the fall). So…I haven’t really thought through that part yet, like what kind of diaper a teensy tiny one should wear to the beach, or when I should aim to first take him in the pool, or whether he’ll need a swimsuit and OH MY GOD I CAN’T BELIEVE I FORGOT AN ENTIRE CATEGORY OF THINGS TO OBSESS ABOUT, THANKS A LOT.