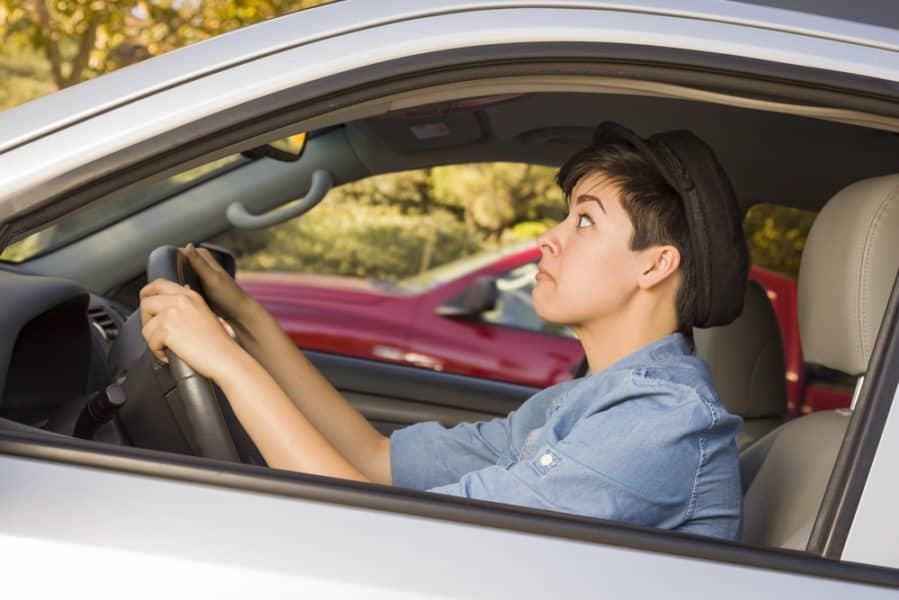 Anxiety, My Reluctant Teen Driver, and Me

I have written here, now and again, about the long process which was teaching my youngest to drive. He had a million excuses, ranging from “maybe autistic people shouldn’t drive” to “but I don’t mind taking the bus.” With my daughter, when she was a teen, the process went more or less as I expected: she was eager to learn, nervous but competent, and thrilled when she got her license.

With my son, the best way I can help you visualize it is to say it’s been like one of those cartoons where someone is trying to put a cat into a bathtub, and the cat is splaying out all its legs and contorting into various shapes to avoid going into the water. With my daughter, it was a process. With my son, it’s been A Process. First, he didn’t want his driver’s permit. When we finally convinced him to get the permit just to start that clock of one year between permit and license, even if he wasn’t ready to drive, it was already a year past when he could’ve gotten it. And then, his complete disinterest in driving persisted, until a summer job where we agreed we would provide transportation as long as he practiced his driving on at least one leg of each trip. That worked for a while, but he remained uneasy. No amount of practice seemed to grow his confidence. At all. And when the job ended, he didn’t want to drive anymore. We let it go for a few months before reminding him that it was time to really buckle down. As with his sister, we paid for private, professional driving lessons. Due to his nervousness, we actually went ahead and paid for twice as many lessons as she’d had. After every one, the instructor would tell me he was “getting there.” I never asked where “there” was, on account of “there” still seemed pretty far away from here.

He finished the driving lessons. High school graduation was looming. We booked his road test. And… he passed! So now that he had his driver’s license, surely he’d feel more comfortable behind the wheel!

… except that he didn’t. He never asked to use the car. He wheedled for rides and insisted he still didn’t feel comfortable driving. I would take him places if he did the actual driving and had me in the car for backup, and although he is a competent driver, his anxiety level continued to hover somewhere around 11 on a 10-point scale. I started to feel like I was torturing him.

And then one day we were out to breakfast and he had some trouble parking at the restaurant. I got out of the car in frustration when he wouldn’t simply let me take over and park, and he proceeded to try to get into one spot (unsuccessfully) several times before giving up and gliding the car, in reverse, smooth as butter, into a different spot. I was just thinking that it was incredible how he’s mastered things like that but worries about changing lines on the highway when… well, it’s not entirely clear what happened. I suspect somehow my son’s foot slipped off the brake, a little, and in his haste to jam it back down, he hit the accelerator. And he’d just parked so beautiful, you know… right in front of a brick wall. So. Um. There was a loud and terrifying *SMACK* while the rear of my car thwacked into the wall, and then we went and had breakfast.

Just kidding! I mean, not about the part where he ran my car into a brick wall. That happened.

But instead of having breakfast, first we had to deal with the car and some hysteria and all I could think was, “Well, that’s it. We’re done. He’s never going to drive again. Given how nervous he was before, how will I ever get him back into the driver’s seat??” But I reminded him about his sister’s first car accident, and all but congratulated him on what he’d done. Because everyone has some sort of early driving mishap, and as those go, he’d done an excellent job: no other cars were involved, no one was hurt, and while he did end up paying for a new bumper, the damage was—overall—minor. It happens. It happened, and now it’s done.

But the weirdest thing happened, after that. He resumed driving. No; that’s not right. He became a different driver. His anxiety all but evaporated. He started asking to borrow the car to run errands and see friends. When we drove together, he was visibly calmer and didn’t spend the whole trip picking an argument. I kept thinking it was my imagination, but the days ticked by and turned into weeks and finally I had to say something.

“What happened?” I asked him, one day. “Ever since you mushed the bumper you’re not afraid of driving anymore. I don’t get it.”

He shrugged. “You’re the one who told me everyone has a first accident,” he said. “And now I’ve had it. And you were right, it wasn’t a huge deal,” here he looked at my face and laughed a little, “I mean,” he continued, “I wish it hadn’t happened, but it did, and I’m okay, and the car’s okay, and… I don’t know. It’s easier now. Is that weird?”

“Nah,” I said, reaching out to pat his cheek, not even realizing I was doing it until my hand was there. “That makes sense. I can see that. I mean, that means something really good came out of all this. I’m glad you’re feeling better.”

A few days ago he had an appointment a couple of towns over. I’ve been driving him to those for… well, forever. “I can go by myself,” he assured me. “I’ll see you when I get back.” This would be his longest solo drive to date—about 30 minutes each way, and navigating the highway—but he was fine. I asked him to text me when he arrived, and he said he would. When the text came, I smiled, and went back to work.

Here’s where I tell you that technology isn’t always a wonderful thing and not all of the anxiety had disappeared from our lives. See, our family has our cell phones set up so that we can all see each others’ locations, and at some point when I checked my watch and realized my son should be home soon, I decided to check where he was. A quick look showed that he was… not at all where I expected him to be. Huh. I peered at the map and pondered. Ahhh, probably he’d gone the wrong way on the highway and was now coming back from farther afield than where he’d started. Well, no matter—my car has built-in GPS and he had his phone. He’d figure it out. Learning experience! I checked again a few minutes later and he was definitely traveling in the right direction, toward home, albeit through town instead of on the highway. Okay, good. But then… I couldn’t get a another location update. My phone kept telling me the same location, over and over, noting that it was correct for 5 minutes ago… 10 minutes ago… 15 minutes ago. And that last known location? Was at a major intersection. Right next to our local hospital.

I want to tell you I stayed calm and cool and collected, but—ha!—yeah, no, that’s not how it went. I remember how calm he was when he left and suddenly I was feeling enough anxiety for both of us, and perhaps a few additional people, as well. Why wasn’t the location updating? Where was he? Was he okay?? Maybe he really wasn’t ready and I had forced him and now… I couldn’t bear to complete the thought. Then the phone rang, and the CallerID didn’t work for some reason (sometimes that happens), so I picked it up and an unfamiliar voice said, “Hello, this is Soandso from Local Hospital…” and I was about 3 pounding heartbeats away from complete cardiac arrest when I did manage to hear that she was calling from the lab about some blood work from the day before, and not calling to tell me they’d just brought my kid in in a Hefty bag. I gave her the information she needed and hung up, heart still pounding.

Now his location hadn’t updated for 20 minutes and my husband wasn’t answering my texts and my poor son, goodness, when he walked in the back door and I all but screamed, “ARE YOU OKAY??” he was completely bewildered.

“I, uh, missed a turn and had to pull off and turn on the GPS, and then it took me a weird way so it took longer,” he admitted. “Why?”

I told him about the location not updating and we had a good laugh, but he kept apologizing and I kept reassuring him that it was fine. Because it was.

Anyway, I suppose the moral of the story is that you should probably let your nervous driver crunch a bumper and then throw away your cell phone. Or maybe it’s that teenagers will pretty much make you crazy no matter what. I don’t know. I need to lie down.