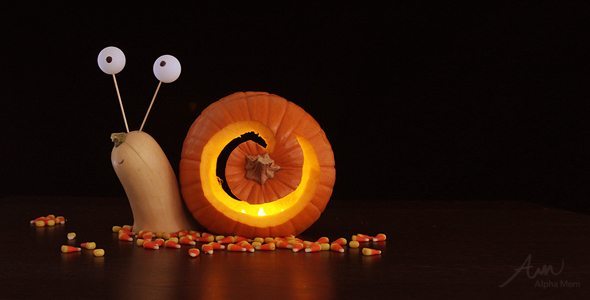 You know what’s fun to make for Halloween? A 3D snail pumpkin! It’s so easy.

How to Make a 3D Snail Jack O’Lantern

1. First you need to make the snail’s shell. Do this by cutting the bottom out of your nice round pumpkin. Scoop out all the seeds and make sure it’s nice and clean.

2. Then cut a spiral in the top of the pumpkin, make sure you don’t carve too much because you don’t want to weaken your pumpkin or accidentally cut the whole top off.

3. Then cut the bottom of your nice round pumpkin to level it, so the pumpkin can sit on its side like a snail shell and not topple over. This pumpkin won’t last more than a few nights with that much exposed pumpkin meat…but it’s fun for one night. And you have to admit, he’s super cute.

4. Now you can make your snail’s body. This is just a butternut squash with the bottom lopped off but you want to cut it at an angle so the snail’s head will be tilted away from the snail jack o’lantern shell like so.

5. Add your snail’s eyes by drilling a small hole in each ping pong ball and inserting a skewer into them. If you don’t have a drill, you can probably make the same hole by puncturing the ball with a push pin and then wiggling the pin around until the hole is wide enough to insert the wooden skewer. Once your skewer is in, poke the other end into your butternut squash where the eyes should be positioned and your snail jack o’lantern’s got eyes! Zombie eyes, like my kid says. To add pupils, just color a small dot in the center of your ping pong ball with a black permanent marker. Easy peasy!

6. You can add battery-operated candles to your snail pumpkin’s shell. (Real candles will burn the shell, so don’t use them!) His eyes won’t light up unfortunately but maybe somebody super crafty out there knows a way to rig up some LED lights into the ping-pong balls. That would be so cool.

Then place your snail pumpkin in a flower bed somewhere, and gardeners will run scared!

I want a garden full of these!

[…] Alpha Mom Made with a Pumpkin, a gourd, two ping-pong balls, and two bamboo skewers. Visit the link to get a […]

This is super cute! I have pinned it.

If you make another hole in the back of each ping pong ball, you may be able to use those little watch-battery tea lights and push the light part (that sticks up) into the back of the ball. Though as heavy as those little lights are, you would have to change how the eyes were attached to the butternut. I’ll give this a shot, thank you!

Crafting a Green World | The home for green crafts and tutorials!

16 Pumpkin Carving Projects You Never Thought Of! | The Garden Glove

[…] my, cuteness. This DIY snail Jack O’Lantern (Photo above), from Brenda at ‘Alpha Mom’ should be the fav pumpkin of every 8 year […]

[…] from Alpha Mom Made with a Pumpkin, a gourd, two ping-pong balls, and two bamboo skewers. Visit the link to get a photo guide on how to carve and assemble them to look like this snail. […]

[…] A pumpkin eating another pumpkin (via The Huffington Post) A creative spin on the usual Jack-O-Lantern face (via FamilyHoliday.net) A pumpkin bonfire (via Better Homes and Gardens) Jack-O-Lanterns made from butternut squash (via Woman’s Day) Spelling “Boo” out using a drill (via Kylie M. Interiors) The cutest 3D snail ever (via Alpha Mom) […]

Amazing Jack-O-Lantern Carving Ideas for YOU and the KIDS