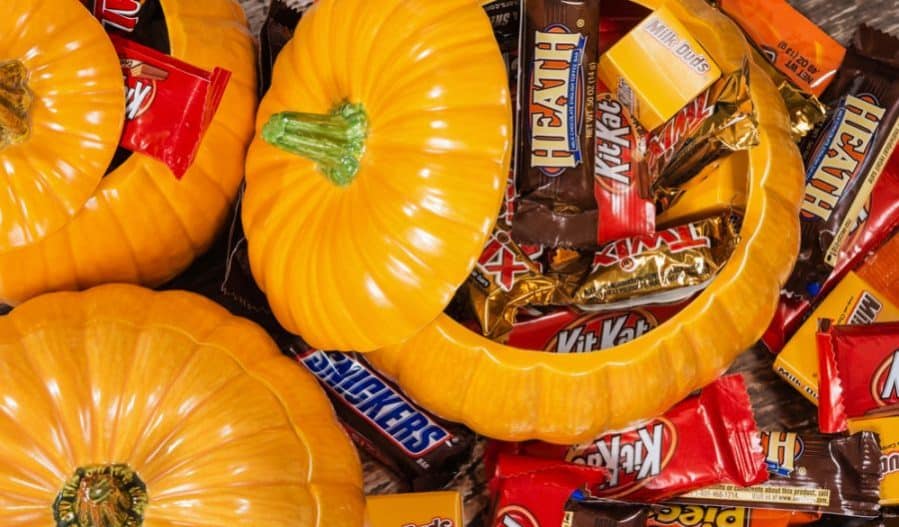 ‘Tis the season for the Internet to be overrun with all things Halloween, from clever DIY costumes you can whip up at the last minute to whether or not it’s okay for teenagers to go trick-or-treating. (As to the former, I once made a “simple” costume for my toddler which ended up costing three times as much as a ready-made costume, but at least it also took me ten times as long as the how-to article promised; and as to the latter, honestly, who cares? Kids like candy. Teenagers are just large, smellier kids.) My kids have long since passed through the time when Halloween matters to them. This means I no longer have to worry about costumes (hooray!) but also that I no longer get to do late-night treat-bag pilfering (boo). On the other hand… I’m a grown-up, and I can just buy candy at the store if I want it. So.

Just because my kids no longer go begging door-to-door doesn’t mean Halloween requires no preparation. We still have kids come around, and I always buy more candy than we could possibly need, both to make sure no little monster goes without and so that my mostly-grown kids can have the leftovers. They had their opinions when they were little, of course—some logical, some baffling—but now that they’re older, I think they make some valid points about the whole hoopla, so here they are for your edification, as well.

Generally speaking, trick-or-treaters want edible treats. Now, I have a huge amount of respect for the Teal Pumpkin Project, as it promotes alternatives and an inclusiveness which I think is wonderful (and needed) even for kids affected by multiple food allergies, but generally speaking, the little goblins at your door want something good to eat. If you go the non-edible route, it should be something really fun (pro tip: a pencil is not “fun”). If you want to stick with candy, you have a few different options.

If you don’t mind leftovers and you’re willing to go out of your way to have “something for everyone,” bear in mind that that the so-called major allergens you tend to encounter in candy include peanuts, tree nuts, dairy, wheat, and—this one is on the rise—corn (which includes High Fructose Corn Syrup and its various relatives). If you take the variety route, this means you can have Reese’s cups or peanut M&Ms, but you also need to have non-nut-containing options, too. You can have some chocolate options (nearly all of them contain dairy) but also need to have a non-chocolate, non-dairy option. You can have Twix but also have to make sure you have a wheat-free option, etc. This… is honestly a nice theory but perhaps a hard one to implement. If you want to try to cover multiple bases at once and you don’t mind spending a little more, I really like the Yummy Earth line of candies—no artificial anything, major allergen free, and they even offer vegan gummy candy.

That said, we have extensive experience with terrible-for-you candy, too, and so can advise on that as well.

Not all Wonkas are Created Equal

I don’t know how many different varieties of Wonka brand candy exist, these days, but I do know that my kids (and their friends) have clear favorites, and you can’t go by the brand and assume it’s all good.

Best Wonka candy ever: Nerds. If you’ve never had Nerds, they’re tiny crunchy sweet pellets in various flavors. I’m pretty sure they’re made of sugar and wax. Probably no one should eat them, ever. And yet? They are delicious. I never knew a kid to turn down one of those little boxes of Nerds. And it’s possible I like them, too.

Worst Wonka candy ever: Runts. If Nerds are so good, why aren’t Runts? I dunno, man. Runts are fruit-shaped and slightly larger, and while Nerds have a satisfying crunch, Runts will chip your teeth. Also the banana ones are banana-flavored, and artificial banana flavor is disgusting. Not that it matters once your teeth are chipped, but you know.

Other Wonka candies: I’m not a fan of Pixy Sticks, but a lot of kids are. Everlasting Gobstoppers are a mid-level candy option. Fun Dip is considered a Halloween treat bag score, but it will also make your tongue bleed if you eat too much of it, so approach that one with caution. Bottlecaps, Sprees, and SweeTarts are candies I grew up on, but my kids and their cohort view as sort of “old timey” now. There’s only one more thing you ned to know about Wonka offerings, and that’s…

Wonka makes Laffy Taffy. Airheads are technically “Airhead Brand,” which is owned by Perfetti Van Melle USA (the more you know!), and even though we’re now all collectively wondering who the heck PVM is (I still don’t know, but they also own Mentos), if you’ve ever eaten these two candies you already know what I’m about to tell you. Laffy Taffy will congeal in your molars and tastes like sadness and plastic. Airheads are chewy and sugary and delicious. Confuse the two at your peril. How does the same company that makes Nerds make this sad excuse for a treat? I have no idea. #teamairheads

The average kid is either an actual fan of “strong” flavors in candy, or at least so conditioned by their peers to take dares with said candies that they have a preference for them, anyway. Sour candies are a big hit with this group, and that includes things like Sour Patch Kids, WarHeads, and Lemonheads. Fireballs may be older than I am, but they’re still a popular item, along with Hot Tamales and and Red Hots. And anything that has the word “Extreme” in the title is going to be either sour or hot (sometimes both!) and—in general—a big hit. After all, what’s the fun in candy if it doesn’t completely burn off your tastebuds, right?

Most kids I know are going to put hard candies at the bottom of their list of preferred treats, but not all. If you’re a fan of hard candy, there’s a definite hierarchy. Those “starlight mixes” you can buy for a buck at the gas station are right down at the bottom, obviously. One up from there would be so-called “old lady favorites” like Werther’s and those strawberry hard candies with some jam in the center. Next would be things like Lifesavers (although that will depend a lot on the flavor, too; kids don’t like Butter Rum, but the Wint-O-Green ones spark when you bite down hard on them, so they’re entertaining in the dark, if nothing else).

Next in that ranking of desirability would be things like lollipops, although, again, those are going to vary. Dum-Dums are okay, but Charms Blow Pops are better. Chupa Chups and other “fancy” brands may be even better than Blow Pops. Any lollipop you can buy at the Dollar Tree in a strip of 10 for a buck should be avoided.

The best hard candy, of course, is Jolly Ranchers, case closed. They now come in all sorts of forms—aside from the ubiquitous rectangle in cellophane, they now make sticks and lollipops and who knows what else—but they remain the King of the Hard Candies.

Everyone has their candy favorites based purely on flavor, of course, but even at their advances ages, my teens agree that certain “fun” elements never stop being entertaining. This category of thumbs-up candies includes things like candy necklaces (which, let’s face it, are basically generic SweeTarts on an elastic string), Ring Pops, Pez dispensers (hmmm… Pez is also basically generic SweeTarts, come to think of it…), bubblegum “tape,” any candy shaped like LEGO blocks or otherwise designed to be played with as well as eaten, etc. I mean, for me, just hand over the Butterfingers, but the kids are happy to play a little.

According to my kids…

Just say NO to: Almond Joy/Mounds, York Peppermint Patties, plain chocolate (Hershey’s Kisses, etc.), most gum, candy corn, and anything wrapped in Halloween-themed tinfoil (eyeballs and such) because it “probably isn’t very good.”

But always say YES to: Starburst, Skittles, Twizzlers, chocolate minis with “good stuff” in them (Krackle/Milky Way/Twix/3 Musketeers/etc.), and the favorites mentioned above.