It’s time to move on from Halloween and start thinking about Thanksgiving, but I’m not ready to let it go yet. Before we shift our attention to turkey, let’s take a quick look at some of my favorite reader-submitted photos from Halloween. Because who doesn’t love a cute kid in a costume! 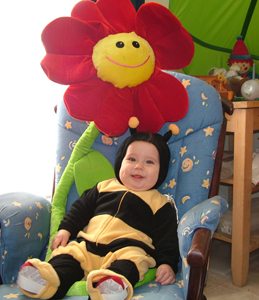 I tend to diss store-bought costumes, but it’s not because they’re all terrible. It’s just that my kids tend to gravitate toward the worst options. Fortunately, our readers are better shoppers than my children and they found some really great mass-produced kid costumes this year. Suzyn sent along this picture of her bumble bee. Like all bumble bees, he has many feelings. 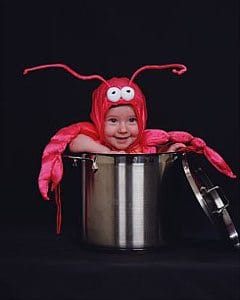 Lobster baby is one of my favorite store-bought costumes. I don’t know why — real lobsters are like giant bugs, which are not at all adorable, but a baby in a lobster outfit is always super cute. And if you can get your little lobster to sit inside a stock pot, even better! Amy’s lobster is remarkably happy to be heading to a lobster boil, poor thing. 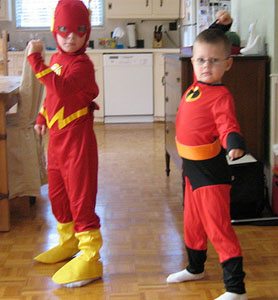 Susan confessed that she spent more than she intended to on these superhero costumes, but her kids have worn them every day for the last three weeks, so the cost per wear is actually quite reasonable. Also, think of the security system she has with all those superheros just hanging around waiting to fight crime. She’s making money on this deal! 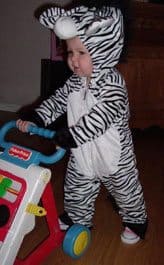 Paula invited a zebra to join the family and, as you can see, it made itself right at home. I always thought a zebra would be messy in a house but this one looks pretty clean. And very chubby. I had a tiny dinosaur one year for nearly a month. So although I paid a ridiculous $20 for a polyester costume, at the end of 30 days we’d spent about .67 a day! Along those lines my children will be wearing their devil ears all day every day for the next week so that our cost per wear is about $0. You thought I was kidding about being cheap didn’t you? 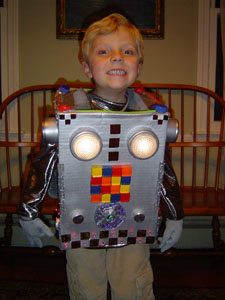 For me, the whole point of Halloween costumes is to do something creative and different. Which is a bummer because my kids’ idea of a successful costume is that it is a readily recognizable Licensed Character. Or an undead prostitute, take your pick. I really want to show my son this robot costume because we have been trying to convince him to do this for five years now. Krissy made this costume for her son and maybe I should listen to her. She said it was “fun to make, but I’m glad it’s over.” Hmm. 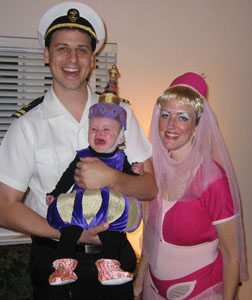 This family “I Dream of Jeannie” costume may be the greatest thing I’ve ever seen. Amy made the costumes herself, and she said that despite her face in this photo, baby Ruby really liked being dressed up as the bottle. This is amazing. Good work, Amy. 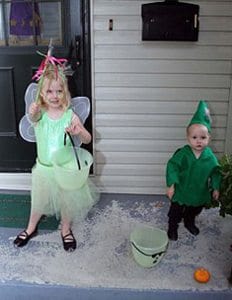 We all know how much I love a sibling theme costume. Katie worked very hard fashioning this Tinkerbell costume for Ellie from green tulle, spandex and ribbon, among other things. Then, she turned her little boy, Joey, into a Peter Pan with some green felt. Why is it the older and more independent my kids get the less inspired I am to create costumes? It would seem I’d have more energy. And yet, Halloween Super Store here I come! Womp womp. 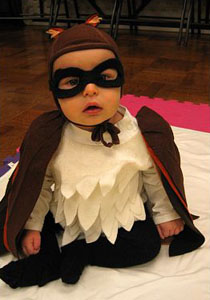 Ryland’s owl costume was made by a friend of Isabel’s. I love that his face is a balance of skeptical and wise. Just like a real owl. But cuter. 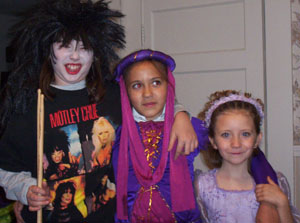 If you’re not crafty yourself and don’t have friends who are dying to dress your kids, don’t worry! There’s still hope! Stephanie shared her trick for pulling a costume together without spending a fortune (or resorting to just buying some stupid polyester thing because it’s October 30 and I GIVE UP): She scours Walmart’s clearance racks for supplies and pulls together costumes from those choices, mixing and matching some and doctoring others. She also digs around in her kids’ closets for things she can repurpose. Her niece, on the right, is wearing her Easter dress as part of her costume. Brilliant. 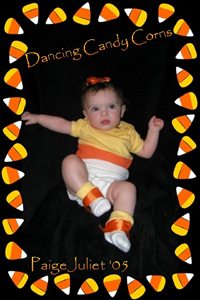 Babies are sweet, so why not dress them as candy? Fun fact: I once ate so much candy corn at one sitting I spent the rest of the day laid up on the sofa. A taste aversion from that event has followed me for nearly 20 years. Heather’s little girl, Paige, may just cure me of that. 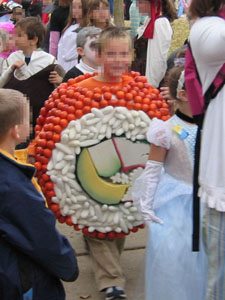 I just don’t know what to say about this costume Kelly made last year for her nephew. It’s a life-sized California roll. WHAT. You can see the entire project on Flickr, just in case you’ve got a kid who would also like to be sushi for Halloween. 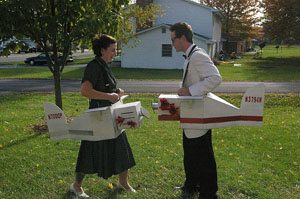 Melissa (another one!) won two costume parties this past weekend with these Patsy Cline and Buddy Holly airplane outfits. Obviously, this wasn’t originally a kids’ costume but it would be fun for teens, or for kids who really love music. And the idea is just great — I can think of quite a few costumes for kids which could incorporate the plane.