Twitter Facebook Pin It Email Article
Prev Father’s Day Bling: DIY Hemp Beaded Bracelets Next Why You Should Grow Food With Your Kids 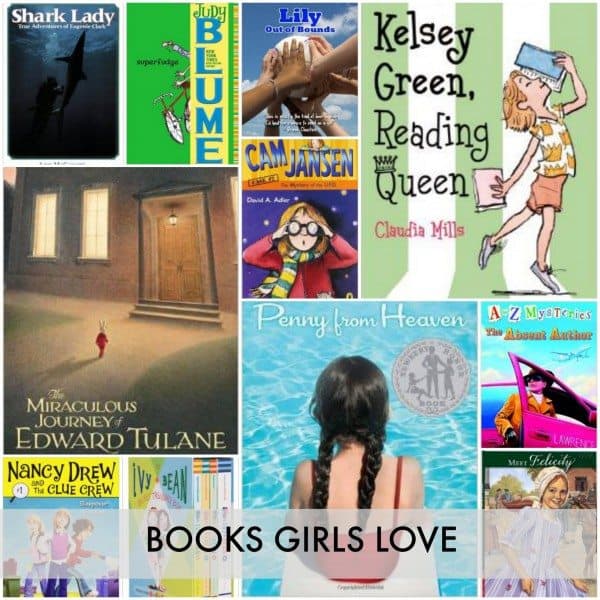 With school getting out, my girls (ages 7 and 9) have a little more free time on their hands, and that means they can’t wait to catch up on their reading. Wait, did I say reading? I meant TV.

When it comes to reading, I often have to pry a One Direction fan book out of their little hands. By the way, did you know that frontman Harry Styles (age 20) says he would never date anyone older than his mum who is 44? I guess that means I have precious little time to get Harry’s attention. Wish me luck!

Before my daughters can watch TV each day, they have to do some reading. Even in the summer – I know, I am an evil mom. And the truth is there are books they and other girls LOVE. (And I’m confident boys too). I asked my local librarian for  suggestions and also asked my mom friends what books their own daughters are loving. Here is a list that might inspire someone in your house to pause the Frozen movie… even if just for a few minutes.

1. Judy Blume books
Yup, totally old school and awesome. No, not Forever for the elementary school set. But books like Tales of a Fourth Grade Nothing, Otherwise Known as Sheila the Great, Superfudge, Fudge-a-Mania, and Double Fudge are funny and real. Major parental warning: Superfudge brings up the topic of how babies are made and not believing in Santa Claus. Also uses the words “stupid” and “shut up” more than I would have liked. (Ages 7 and up but heed the Santa Claus Warning!)

2. The Cupcake Diaries by Coco Simon
My girls haven’t read this collection yet but these books have been described as an “obsession” by a friend’s daughter. They focus on group of middle school girls who start a cupcake club. Deals with real life situations and lots of yummy cupcakes. (Ages 8 – 12)

3. Cam Jansen Mysteries by David Adler
Got a daughter who loves a good mystery?  Cam Jansen is a kid with a photographic memory who solves mysteries all over town. These are not scary mysteries. At all. (recommended for ages 8 – 12 but I think it skews a little younger)

4. Nancy Drew & the Clue Crew series by Carolyn Keene
Another great mystery series! Nancy Drew and the Clue Crew is a a relaunch of the classic Nancy Drew series. 3rd grader Nancy and her friends start their own detectives club.  (ages 6 – 9)

5. A to Z Mysteries  by Ron Roy and John Burnery
These books (beginning with the The Absent Author and ending with The Zombie Zone) follow the adventures of three child detectives. They are nine years old and live in Green Lawn, a fictional town in Connecticut. (ages  6 – 9)

6.  Ivy & Bean series by Annie Barrows
This series is based on two friends who are very different and who never meant to like each other – Ivy (a quiet, intellectual kid) and Bean (a spirited child). They are both 8 years old and get in lots of mischief. (age 6 and up)

7. Diary of a Wimpy Kid series by Jeff Kinney
This series is not just for boys! In these beloved books, Greg Heffley finds himself thrust into middle school and must deal with the growing pains of school life. (ages 7 – 13)

8. Junie B. Jones by Barbara Park
I want to party with Junie B. Jones because she is hilarious. This series is really a pleasure to read, except for the bad grammar which I constantly corrected. Read every one. (ages 6 – 9)

9. My Weird School Daze series by Dan Gutman
This series centers around A.J. (a boy who doesn’t like school) and his enemy Andrea Young (who loves school). You just know those two are going to get married someday. It’s silly, funny and of course, weird.  (ages 6 – 10)

11. Rainbow Magic by Daisy Meadows
This series focuses on magical fairies (are there non-magical fairies?) and some girls are just in love with these fairy adventure books. (ages 7 – 10 but I think it’s skews a bit younger)

12. Magic Puppy Series by Sue Bentley
If magic fairies aren’t your kid’s thing, how about some magical puppies? My daughter desperately wants a dog so I told her she could have a book about a dog. The magic is just a bonus. (ages 7 – 11)

13. Soccer Sister series by Andrea Montalbano
If your daughter loves soccer or other sports, this might be a great fit.  Good positive messages about friendships, family and playing sports.  (ages 9 – 13)

14. American Girl historical books by various authors
I keep trying to hate American Girl products because of those ridiculously expensive dolls but the truth is, there are some great American Girl books. They have a whole series of historical books focused on girls that lived centuries ago (like before TVs and iPads people). You daughters will learn a whole lot of history which isn’t a bad thing between ice pops and movies this summer. (age 8 and up)

16. Penny from Heaven by Jennifer Holm
This coming of age book is centered around 11-year-old Penny in the summer of 1953.  Penny spends her summer trying to convince her mother she won’t catch polio from the community pool, keeping her cousin from turning into a criminal and trying to figure out the truth of how her father died. (age 9 – 12)

17. Heidi Heckelbeck series by Wanda Coven
This series is about an 8 year old girl Heidi Heckelbeck who is secretly a witch! She tries to keep her powers hidden as she lives life as an ordinary kid. Lots of illustrations and perfect for beginning readers. (ages 5 – 7)

18.  The Miraculous Journey of Edward Tulane by Kate Dicamillo
This is the adventures of Edward Tulane (a china rabbit) who is loved by a young girl but then lost over the side of a boat. The book follows his journey and the people he encounters. Rabbits have all the fun, don’t they? (ages 7 – 10)

So run by your local library and pick up some of these books. My daughters are currently reading the Judy Blume books and we can’t wait to work our way down the list. And don’t forget to tell us your daughters’ favorites. Happy reading!

(This is a companion piece to Books Boys Love)

More on Summer Reading from Alphamom: