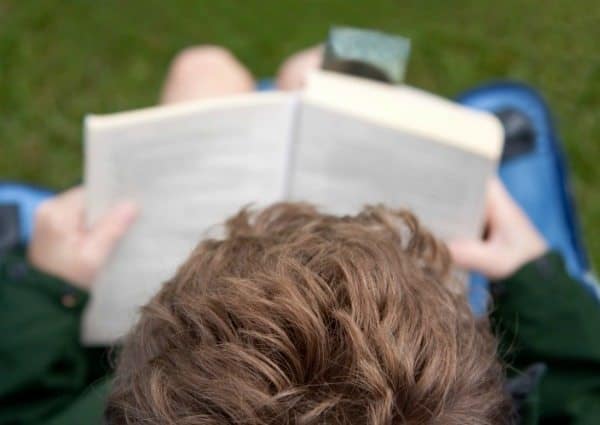 Everyone knows that boys don’t like books. (Whoa— how’d you all get those torches lit so quickly? At least give me a running start!) But what I mean by that rather sweeping generalization is that, with so many studies and articles showing that boys lag behind girls in literacy, one could easily assume that the last thing any boy wants to do is curl up with a good book and read.

Except, they do. Want to curl up with a good book and read, that is. At least they do in my house where my 10-year-old son Sam will spend twenty minutes perusing the fine print on a bag of potato chips just because he “can’t wait to see how it ends.” Sam has always been a voracious reader and even blew through the entire Harry Potter collection in less than a month last summer. I know, I have it easy with him.

But then there’s Jack, my 8-year-old son, who’s more of a challenge because he needs to have his interest really piqued by a book in order to make a commitment to it. In that way, he’s probably more like the typical boy reader the researchers are referring to, but we’ve still been able to find quite a few books that he just adores.

The good news is that no matter which camp your boys fall into—book worm or book, um, whatever the opposite of worm is—there’s a plethora of stories out there that they’ll be happy to sit down and enjoy. (Key phrase in that sentence: “sit down.”) With the help of our elementary school librarian, I’ve put together a list of books that boys (and more than a few girls I know) seem to love. In general, the librarian told me, most boys gravitate toward fantasy, humor, Greek mythology (especially books with illustrations of the mythical creatures), illustrated dragon books, Guinness World Records and non-fiction stories about military vehicles and ships. Yep, there’s a whole world out there besides “Diary of a Wimpy Kid.”

Please note that along with the book selections, I’ve also included a little commentary from my sons. Which I thought was a good idea at the time, but now they both want jobs at The New York Review of Books after they graduate from grade school.

1: Magic Tree House series by Mary Pope Osborne
There are almost 50 of these books that tell fun tales of Jack and Annie’s adventures through time to different places around the world. A great way for your reader to actually learn some history. (Ages 8 and up.)

Sam: I definitely learned a lot of history! Maybe too much!

2: BeastQuest series by Adam Blade
A boy does battle with dragons and other mythological creatures in over 60 books. Hugely popular at our school. (Ages 7 and up.)

Jack: Really fun books. All of them have monsters with three children going on a quest to defeat them. I like them because they have a lot of adventure and they’re exciting.

3: Captain Underpants series by Dav Pilkey
I know, I know, not exactly Oliver Twist, but boys go crazy for these slightly crude yet funny illustrated novels. (Ages 7 and up.)

4: My Weird School series by Dan Gutman
With titles like “Miss Daisy is Crazy,” kids love these funny books about not-so-perfect teachers and principals. (Ages 7 and up.)

Jack: They’re all about teachers who are weird at their school. I like reading them because in each book it’s different. Like in one book the lunch lady puts weird stuff in the mashed potatoes. Gross!

5: The Genius Files by Dan Gutman
A new series where 12-year-old geniuses Coke and Pepsi McDonald make an exciting, adventurous trek across America to uncover a secret government plot. (Ages 8 and up.)

Jack: It sounds very mysterious and I will definitely read it.

6: I Survived by Lauren Tarshis
My boys don’t have any of these yet, but our first-grade neighbor Jackson goes crazy for these fictional stories about real events like the sinking of the Titanic, Hurricane Katrina and September 11th. (Ages 7 and up.)

Jack: I’ve never read one of these, but they sound like a really good series and I’m going to read them soon. (Do I have to?)

7: Rangers Apprentice series by John Flanagan
Action-filled fantasy that involves a boy training to become a knight in a medieval world. A movie version will debut in 2013. (Ages 10 and up.)

Sam: I don’t usually like medieval stuff, but this is pretty dang good.

8: The Lightening Thief and Lost Hero series by Rick Riordan
Riordan based his hero Percy Jackson, the troubled twelve-year-old diagnosed with both ADHD and dyslexia who is actually the son of Greek God Perseus, on his son. His storytelling is always very compelling and exciting and I personally would have loved to read something like this when I was young. (Ages 10 and up.)

Sam: This got me interested in Greek gods and now I know every single one of them. Impressive, isn’t it?

9: Sports-themed fiction by Mike Lupica, Tim Green or Matt Christopher
With titles like The Underdogs and Safe At Home (Lupica), Pinch Hit (Green) and Body Check and The Great Quarterback Switch (Christopher), these are perfect for your young sports lover. Christopher’s and Green’s books are good for ages 8 and up, Lupica’s tend to skew slightly older.

Sam: This is all I read now. They’re really awesome because I love sports and I’m kind of an expert, sportswise.
Jack: I think that every single one of them gets you more into sports.

10: Anything by Roland Smith
Former zookeeper Roland Smith is a personal favorite of both Sam and our school librarian. Most of his books are stand-alones, like Storm Runners and Tentacles, and are extremely well written with fast pacing that boys really love. (Ages 9 and up.)

Sam: My favorite books ever because they’re just exciting. You never know what’s going to happen next! Hey, will you buy me his new one?