Twitter Facebook Pin It Email Article
Prev How to Make Sand Candles Next Falling Asleep While Nursing: Is It Really Such a Big Deal? 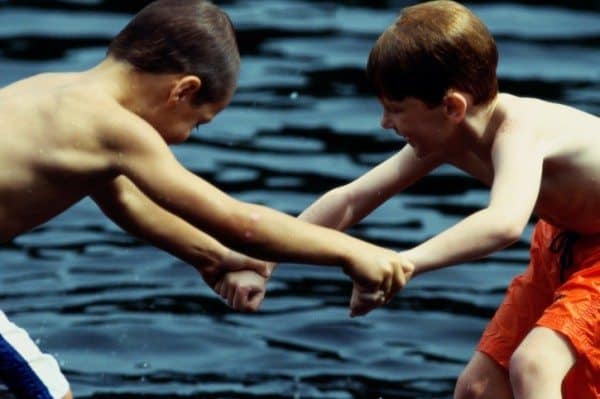 Summer for my two boys is about as idyllic as it gets. Long, lazy days of riding their bikes around town. Hours spent hanging out in their tree house, trading baseball cards and friendly insults with their best buddies. Late afternoon jumps into the ol’ swimmin’ hole to cool off. And when they get hungry, mom is always ready with a plate full of freshly baked cookies and a glass of ice-cold lemonade.

Oh, wait—that’s summer for the boys in the movie Stand By Me, not our summer. Our summer blows.

Okay, it doesn’t exactly blow, but it’s still not quite the classic, unstructured free-for-all summer that my sisters and I enjoyed when we were growing up in the 70’s. I’d love nothing more than to give that experience to my boys, but unfortunately, times have changed and it never works out the way I hope it will.

I always start off with good intentions, of course. I welcome the boys home with open arms on the last day of school, my heart brimming with joy because I have them all to myself for three long months. I plan trips, I buy snacks, I brag to my friends that I didn’t bother to sign my kids up for camp because they don’t need it. “They’ll swim!” I say. “They’ll do science projects!” I say. “They’ll sit under a tree with journals and jot down their innermost thoughts about this crazy thing we call life!” I say. “It’ll be just like a Norman Rockwell summer!”

Or, more accurately, a Norman Bates summer. Because ten seconds in, the kids are wrestling over a Pokémon card, it’s 112 degrees outside and I’m screaming my lungs out in the shower because it’s the only room in our house with a lock on it. Honestly, why is doing nothing so damn time consuming?

You’d think kids who’ve been stuck inside a classroom for nine long months would revel in completely aimless days, but you’d think wrong. My kids—and those of most of my friends— instead enter summer vacation much like a prisoner reenters civilian life. They gaze at the TV, they beg to play video games, they get on each other’s nerves, they tattle, they whine, they fight, they dramatically sigh, “What should we doooooo?” Kids used to their lives being scheduled become completely overwhelmed by the sudden influx of free time. 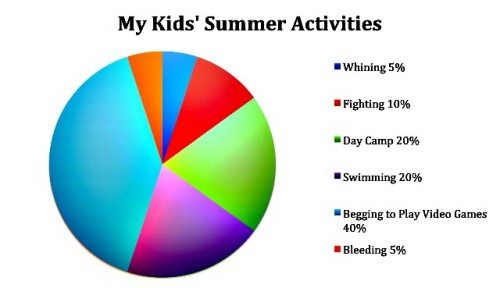 Conversely, my sudden lack of free time completely overwhelms me. Now instead of long, uninterrupted hours to write, there are two little people constantly barging into my office telling me they’re bored. (By the way, “bored” has 1,203 syllables when said by a 10-year-old boy.) I tried to be firm and made a rule that I wasn’t to be bothered unless someone was bleeding, but hello—I have two boys. Someone is always bleeding. What can I do to keep them busy, yet also get some time to myself?

Pushing them outside to play with the neighborhood ruffians like my mom did to me doesn’t work because most of the ruffians in our neighborhood are either at ballet camp or spending the summer at their second homes in Colorado. (Seriously, ruffians ain’t what they used to be.) Plus it’s really, really, really hot in Austin, so after twenty minutes of being outside, the sweaty, red-faced kids are right back inside wrestling over that same damn Pokémon card. (Oh, how I hate you, Pikachu.)

An all-day camp isn’t the solution, either, because we tried that one year and all of us were miserable. So this summer, I think we’re just going to compromise. A few half-day sports camps, a few half-day art camps, swimming, and at least a few planned outings a week. Even a trip to the library or the movies or Costco burns up time and is a nice break from being outside in the hot Texas sun. The rest of the time, they can do whatever they want, be it watch TV, play on the computer or (gasp) read a book. 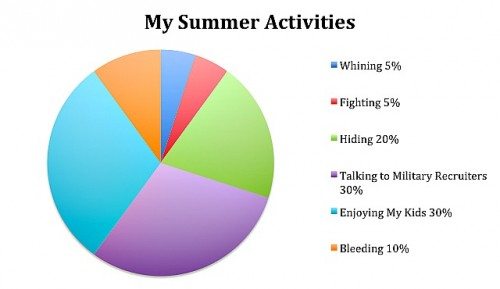 I’m also going to give up the dream of the boys just running out the door and instead schedule playdates with their friends from school. Sure it might be a lame modern parent thing to do, but who cares if it buys them a few hours of fun and me a few hours of working time? Besides, I’d rather they play with their friends inside our house than get heat exhaustion riding their bikes around the block looking for trouble.

I know by doing all of this, our summer won’t be as classic and timeless as the one in Stand By Me and you know what? I’m okay with that. We’ll still have a good time together until school starts. And besides, didn’t the boys in that movie find a dead body in the woods? That probably won’t happen at art camp.

Does my pie chart look like your summer line-up? Let me know if I’m missing something!

More on Summer Parenting from Alphamom: