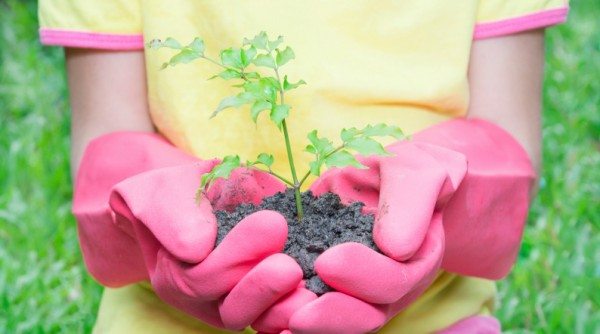 Why You Should Grow Food With Your Kids

As I write this, my green beans runneth over (seriously, the vines are threatening to take over the yard), my tomato plants are heavy with not-yet-ripe fruit, the eggplant and peppers are starting to produce, tiny cucumbers have popped from the vines, and I’m still thinking about how good last night’s dinner was, primarily because I used a zucchini from outside to make “noodles” for my pasta sauce. And I have so much basil to trim back, instead of buying the world a Coke, I think I’ll make you all some pesto.

Lest you think I’m some sort of green-thumbed magician, at the same time, only two of the three houseplants here in my office are still alive, and I consider 66% a pretty good survival rate. Because I’m actually… not all that good at growing things. Seriously.

I didn’t grow up on a farm. I don’t even remember my parents having a garden, though I’m pretty sure they did when I was very small. No one ever taught me the “right” way to grow fruits and vegetables. I have a functioning brain, access to both Google and a helpful local gardening store, a willingness to get a little dirty, and a love of fresh food. I started six years ago with a few containers on the porch, and every year my garden gets a little bit bigger. I love it! Perhaps more importantly… I think the kids do, too.

So here’s why you should try it out, if you haven’t:

Gardening is an ongoing learning experience

Creating your garden—whether you’re tilling the back forty or just putting a few plants outside in pots—requires some research into what grows well, when, in your area. You’ll also end up meeting all sorts of critters you maybe didn’t even know existed, and yes, some of them may make you rethink this whole gardening thing (*coughcough*tomato hornwoms*coughcough*), but really, it’s interesting and you’ll all learn a lot. I know a lot more about insect control now than I ever thought I would, and I don’t know if it makes me a better person, or anything quite that deep, but I do know there’s a deep satisfaction in encountering a problem, researching it, and solving it. Especially if the solution yields delicious food!

I don’t know about your kids, but my kids would always rather sit inside with their electronics over getting sweaty in the dirt, weeding. Weird, right? But gardening is a family affair, here, and I remind them that no one ever died from getting a little dirty. I also remind them that this is food they’re planning to eat, and so it behooves them to help take care of it. In a world where our kids are constantly being asked to do things like build dioramas for class (“Why? Does it make more sense in a box?”) or pick up their rooms (“I like it this way!”), this gets them outside, working hard with their hands, with a very simple end goal that makes sense to them. If that doesn’t convince you that it’s good for the kids, allow me to add that a child who has been working in the garden and gotten really hot and tired tends to go in, take a shower, and sleep long and hard that night. (Even the ones who are hardcore night owls.)

Most of us live lives separated from this experience

Yesterday my daughter had a friend over to swim. While they were in the pool, I went outside to pick beans. I was chatting with them while I did it, and then said I was going to take the beans inside. My daughter—ham that she is—shouted, “Wait!” Then she tilted her head back and opened up her mouth like a baby bird (my cue to feed her a green bean before I left). I obliged, and her friend observed this and said, “What is that?” I tilted the bowl to display my bounty, and when that didn’t seem to solve the question, I said they were green beans. “Can you eat those raw?” her friend asked, incredulous.

So, okay; most of us aren’t quite that far removed from the way food comes to us… but you may still be surprised at what your kids discover along the way in your gardening experience. My daughter’s friend has maybe only ever seen green beans in cans (and only ever eaten them cooked, before I shared our fresh ones), but even my kids, who’ve grown up grocery shopping with me and eating plenty of fresh veggies, seemed to think I was some sort of grand magician the first time we made homemade sauce from our own tomatoes. I believe, “Whoa, this tastes way better than that crap that comes in a jar!” was the first comment.

Even picky eaters will eat what they grow

Having your own garden might not turn your picky eater into a ravenous omnivore, but it will increase the likelihood of even the pickiest kid trying something new. I let the kids help choose what we plant, and so far we have a great track record of “that looks weird, let’s plant some of that” turning into a food they really like. My daughter still “doesn’t like tomatoes,” which is to say that if I slice one for sandwiches or whip up some salsa, she remains unimpressed. But she eats my tomato sauce, and in the middle of winter when we run out of homemade sauce, I now have a decent idea of how to doctor the commercial stuff to turn it into something she likes. (Is there a National Lycopene Board? They should hire me.)

Although I don’t make them do it during the school year—at this point, they’re often far too busy with homework and activities—during the summer I have my kids cook dinner on a regular basis. My son is much more adventurous than his sister, and will survey the garden before planning his menu, which I love. But even my daughter will ask me what would be good and also use some of the fresh herbs we grow. Even when I’m the one doing the cooking in the summer, the compliments just seem to flow a lot more freely. I’d love to take credit, but food you just picked just tastes a lot better than stuff that’s been sitting around the grocery store. (And hey, if you’re nervous and/or short on space, start with some herbs. Fresh herbs are about 1000% times more yummy than dried.)

Do you have a great gardening-with-kids experience to share? Or have I maybe convinced you to try it?