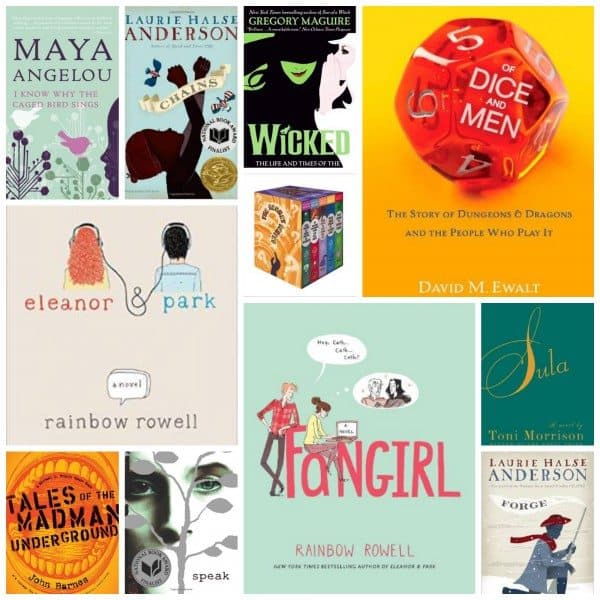 It’s that time again… the days are long and lazy, and if they’re not outside, seldom will you see my teenagers without a book in their hands. (True, their cell phones might be in their other hand, but still. I’m content to call it a victory.)

I’m sharing our book recommendations today with the same caveats I shared last year; namely, that my kids have their own (sometimes very specific) interests, and I do not censor their reading material in any way. That means sometimes they read stuff that I find absolutely uninteresting, or that they read books other people may find inappropriate for teens. Please use your own best judgment if you have concerns about the literature your children consume. I’ll do my best to warn of possible issues, but as always, my best advice when it comes to this sort of thing is simply: Read it yourself. Not only will that leave you with no questions about what your kids are reading, it’s sometimes the best way to discover a great read for yourself!

Last year my son was 13, and spent a good chunk of the summer re-reading the Percy Jackson and Septimus Heap books—both series are targeted at kids a little younger. This year he’s 14, and I’m seeing a trend. I think that part of the way he decompresses at the end of the school year is by engrossing himself in a compelling series that maybe allows him to just… be a kid. And you know what? That’s totally fine by me. Right now he’s working his way through The Secret Series by Pseudonymous Bosch. This is one of those series that really offers something for all ages, even though the supposed target audience is younger. If your child once enjoyed the Series Of Unfortunate Events books, chances are excellent they’ll love the Secret books. It’s the same sort of hard-edged (but not scary) humor amidst mystery. And—bonus!—the protagonist is female, which I always appreciate in a book or series that seems to appeal equally to boys and girls.

When asked to recommend other books he read and loved recently, I was not surprised to receive a strong endorsement for Of Dice And Men: The Story of Dungeons & Dragons and the People Who Play It, as that was pretty much all he’d talked about while reading it. If you have a budding D&D player on your hands, he will love this book. It’s pretty much a behind-the-scenes look at the evolution of the game and the (sometimes surprising) infighting amongst its early devotees. My son couldn’t put it down, and even I have to admit—as someone who barely comprehends the lure of the game—that the pieces of it I’ve read really shed some new light on why so many gamers find it so compelling. This is not a “light” read, but if D&D is infiltrating your home, put this one on your reading list, stat.

Finally, my son offers a thumbs-up to Laurie Halse Anderson’s Seeds of America books—Chains and Forge (with the conclusion of the trilogy, Ashes, due to be forthcoming next year). I’m not sure I realized he was such a sucker for historical fiction, but he says, “They’re interesting stories and you end up learning a lot about history without even realizing it, while you read them.” So… if you’d like a compelling tale or two set on the stage of early America and the Revolutionary War, these are your books. They’re a perfect set-up for American History class without feeling like assignments, because the characters and their struggles are compelling and relatable, even for young teens. (Next up on his reading list: Fever 1793, also by Anderson, about the Yellow Fever epidemic in Philadelphia. Historical fiction FTW!)

Last year my daughter was all about John Green, which means that this year—having already devoured all of his books—she is all about Rainbow Rowell. Green himself recommended Rowell to his fans, and what a gift that was; their writing is similar in its raw angst, and I daresay fans of one will love the other. When tasked with determining her favorite, my daughter hemmed and hawed. “It’s Eleanor & Park, really,” she said, “but that one will pretty much rip out your heart and stomp on it.” (True story. The only book I’ve read recently that made me cry harder than The Fault In Our Stars was Eleanor & Park. If you buy this book, buy tissues.) “Maybe you should tell people to start with Fangirl, first, because that’s also really good, and not quite as sad.” Both books touch on difficult subjects and are not for younger teens or those who are very sensitive and easily disturbed. Both books were also so amazing that my kiddo basically demanded I read them as well, and with both books I was sorry to see them end. (Dear Rainbow Rowell: Please write a hundred more books. My kid and I would appreciate it. Love, Mir.)

Right now my daughter is reading Tales of the Madman Underground by John Barnes, which is often characterized as “The Catcher in the Rye meets On The Road,” which my daughter says sounds about right. It’s a “I’m a screwed up teen with a screwed up life just trying to figure out how to be normal” kind of story, and although it’s set in the 70s, she says she’s finding it very relatable. “I haven’t finished it yet,” she says, “but so far I’m really liking it. I like that Karl kind of wants to separate himself from the kids he’s been in therapy with forever, even though they’re the ones who get him.” Again, this isn’t a book for younger teens, but she gives it a thumbs up.

If you weren’t already familiar with Laurie Halse Anderson, it might surprise you to know that the same author who writes riveting historical fiction also has penned a number of novels chock-full of teen girl angst, which is why I’m recommending the same author from both kids, but for different books. My daughter says that Speak is probably her favorite Anderson novel, but cautions that due to the topic of sexual assault, this novel can be triggering and/or inappropriate for some readers. She says a close second would be Catalyst, and as the protagonist there is a teen obsessed with escaping her current life by gaining admission to the college of her dreams, this could be a particularly compelling read for teens either already in or thinking about the college admissions process. Regardless of the genre and setting, Anderson’s writing carries a certain note of “these are real feelings about real things” that I think helps teens connect to her words. Bonus: fall in love with Laurie Halse Anderson’s works and you’re in for a long-lasting treat, as she’s a prolific author and it will take you a while to work your way through all of her books.

My Summer Reading Book Recommendations for the Teens

Same as last year, I feel like I’m getting more recommendations at this point from the kids than the other way around, but I do feel like they’re getting old enough now for me to recommend some of my old favorites, as well as some more recent reads I suspect they’ll love.

I have to start with the first book I ever stayed up all night to finish reading, because I think my daughter is finally ready for it: Every writer has one novel they say changed their life, and for me, that novel is It by Stephen King. Mind you, this is a tome of a book (over 1,000 pages) and it is scary, but it’s also an incredible piece of storytelling that seamlessly weaves together the innocence (and sometimes, ruined innocence) of childhood and the eventual distractions of adulthood. I read It at my daughter’s age and couldn’t put it down. Plus, the bad guy is a clown (although, as with so many Stephen King novels, he’s just a personification of overall evil, at some level), and everyone hates clowns. (Okay, fine, I hate clowns. Probably because of this book.) Summer is the perfect time to read a book this thick, and the middle-teen years is the perfect time for a voracious reader to dive into the story of old childhood friends, what they survived, and why they have to come together one more time.

For my son, his love of all things sci-fi and fantasy tell me he’s probably ready for Gregory Maguire’s Wicked Years books. It starts, of course, with Wicked, a take on the Oz story that will definitely leave the reader certain we’re not in Kansas anymore. And if you’ve enjoyed the popular Broadway show, don’t be fooled—Maguire’s Wicked is much deeper, darker, and richer than the story portrayed on stage. I also enjoyed Maguire’s Confessions of an Ugly Stepsister—it’s the same “take a common tale and change the perspective, turn it all on its head” sort of approach, but for readers new to Maguire who are willing to put Idina Menzel out of their minds (I’m not sure my daughter is ready to have her love of the music sullied by a change in the story…), Wicked is definitely the place to start.

Finally, with the recent death of Maya Angelou, I’ve remembered how reading I Know Why the Caged Bird Sings in high school changed my perspective on the oft-repeated lament of things being “not fair.” I’d love for both kids to read this one, but I know it’ll be an easier sell right now to my daughter. Assuming it resonates with her the way I hope it will, I’ve strategically placed it on the bookshelf right on top of Toni Morrison’s Sula (which is another of my favorite reads I think she will enjoy). Do note that both of these books, even aside from discussing issues of racism and classism, are filled with a lot of mature subject matter and are not appropriate for young or very sensitive readers.

What are you and your teen(s) reading this summer?

More on books and reading from Alpha Mom: