Twitter Facebook Pin It Email Article
Prev How To Make Terrariums With Kids Next This is Me Journal: a perfect keepsake gift
Activities

My nine-year-old daughter has lost almost every one of her baby teeth and collected, on average, a dollar a tooth for each of them. Now her baby molars are falling out and they’re falling out in two pieces which means, obviously Mother, she gets paid twice for them. Our tooth fairy is no dummy though, she brought fifty cents for the first molar and another fifty will come when the other half falls out. She’s smart! Now if she could only remember to actually come on the night one of my kids loses a tooth.

Today I thought it would be fun to take a look at tooth fairy traditions and gear.

The Tooth Fairy: A Little Back Story 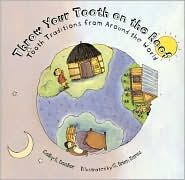 The tooth fairy myth originated in the United States but is found in many other countries, including Ireland, South Africa, Italy and Australia. It’s said to be a combination of an old European tradition of burying lost baby teeth in the ground and the story of a tooth mouse from a 17th century French fairy tale titled “La Bonne Petite Souris.” In the story, a fairy is transformed into a mouse to help a queen defeat an evil king; she hides underneath the evil king’s pillow and eventually knocks out all his teeth.

You can read about all the various tooth fairy tradition in Throw Your Tooth On The Roof, a book of collected traditions by Selby Beeler.

Special Containers for the Fairy’s Loot 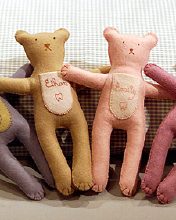 I love the idea of specific tooth fairy-related gear, like cute boxes or bags for your child to put her tooth in at bedtime. My kids are very light sleepers, though, so if the tooth fairy were to reach under their pillows to collect a tooth, they’d definitely wake up. I’ve also found that if the special tooth box is left on the kitchen counter, instead of under a pillow or on a bedside table, the “tooth fairy” is a lot more likely to make a deposit in a timely manner.

You can also make your own tooth box, like this one by artist Vesna Taneva-Miller, constructed from a large matchbox, although I might add a ribbon handle so the box can hang on the outside of a bedroom door, further insuring the tooth fairy will not forget to stop by and won’t have to worry about tripping over toys and waking up a kid.

These tooth fairy bears from Martha Stewart (pictured above) are a bit more complicated but far too cute not to share. I know it’s sewing but remember the softies my kids and I made? It has to be easier than that — the bears only have one head, after all.

According to this CBS report, the going rate for teeth is rising, up by 22 percent from a year ago. The average kid is raking in $2.09 on average per baby tooth. I’m taking heart, though, in the fact that most parents in the survey said they give out $1.00 per tooth. How much does your tooth fairy fork over per tooth?

Why Do My Tweens Still Believe in the Tooth Fairy?
Parenting Traditions from Different Cultures
The Lies We Tell