How To Make Terrariums With Kids

A little over a year ago my friend Maggie was bitten by the nesting bug and created some beautiful terrariums using succulents and large vintage apothecary jars. I was inspired, I was so inspired it only took me a little over a year to actually, you know, do something.

Here is her excellent tutorial with some great tips and pictures. You’ll also find lots of inspiration on Flickr here.

I decided to make a couple terrariums with my kids this week because it was Spring Break, only not at all like spring but rather cold and dreary. By Friday afternoon we were going to have to do something drastic, like have mouths surgically sewn shut, if I didn’t find us all an activity to do.

I decided a terrarium would be an easy enough project and could burn at least two hours of daylight. Here was our supply list: Potting soil, glass containers and various succulents.

I suppose you could be far more involved than we were but I am the type of person who looks for the easiest way out. Which doesn’t explain why I live in one of the more northern states of the country, but let’s just leave that alone. We mainly put dirt in our glass containers– we found ours at the craft store for $5 each– put our plants in the dirt and added some small cars and toys to the scene and voila! Complete. 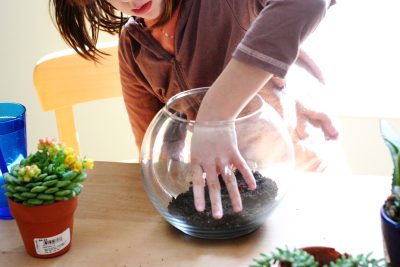 See? This is the dirt being put in the container. This was before Madison read the potting soil package and learned potting soil is made of composted manure. AND MANURE IS POO!!!!! 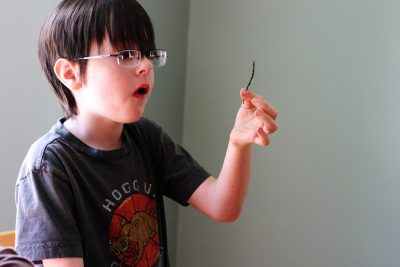 Here is my son experiencing nature for the first time. Or so it would seem from this picture.

I didn’t get pictures of us fiddling around with the plants and realizing I bought too many plants. Or rather, I bought too small containers. But still, they turned out nice. 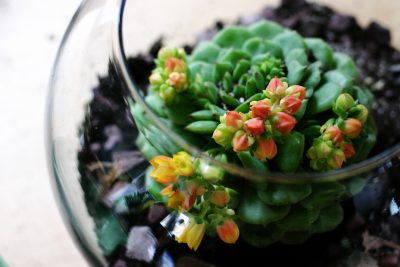 Maddie wanted just one plant and nothing else in it, she is a minimalist. Her plant is beautiful, a version of Hens and Chicks. 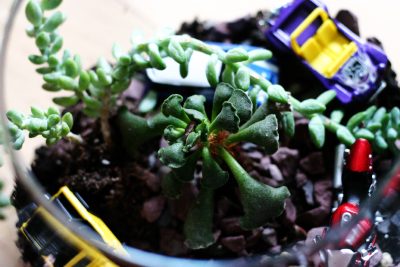 And here is Max’s set of plants, all of which I do not know the name of. Max is more of a maximalist when it comes to his terrarium.

I am the opposite of an expert when it comes to anything related to plants. My mother-in-law gave me a beautiful ivy topiary when my husband and I were engaged 12 years ago. I immediately set about killing it, until she took it back to her house to ‘nurse it back to health’. I haven’t seen it since because we both know I’d start to kill it again.

Here is a short tutorial by someone who actually knows what they’re doing. But it’s so long I sort of fell asleep halfway through.

They do bring up two good points, though: 1) terrariums need slow growing plants, and 2) a layer of pea gravel on the bottom of the pot is a good idea for drainage.

We used succulents because I love how they look and because they are next to impossible to kill. Cacti would also be great fun– my son is obsessed with them– but the day we shopped they didn’t have a great selection.

From Maggie’s tutorial I learned that succulents do not need much water, just a misting about once a month. I can barely remember to water my cats so this will work out just fine. Also unlike regular transplanted plants, they like to acclimate to their new surroundings before being watered.

I could see doing this project with 4-year-olds on up. Some of the actual arranging of plants is too difficult for small hands, but my son is having a blast changing out the dinosaurs, Star Wars Lego guys and Matchbox cars at least once a day. Courtney at Two Straight Lines did this project with her 4 (or is he 5?) year old using non-succulents and larger containers. I love their results and will definitely spend more time finding larger containers next time.

We burned about three hours of daylight on this project, including shopping for supplies. The actual planting took less than an hour, involved no swearing and was within my tolerance level for messiness.

A win on all sides.