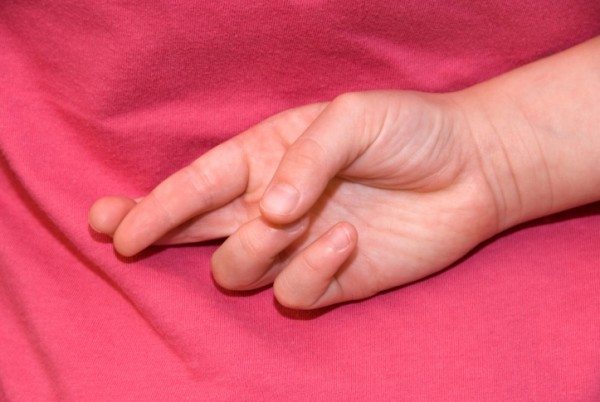 The Lies We Tell

Lying is a necessary part of parenting.

Not lying about big things.  It’s the small things, the so-called white lies.  Any parent that tells me they never lie to their kids, well, I think they are lying.

Last year during the holidays I bought this huge decorative jar filled with candy.  I set it out on the kitchen bar as a decoration.  When the kids asked me about it I told them that the candy inside was fake.  They believed me.  Some may condemn me for lying, but I was saved from finding cellophane wrappers stuffed between the couch cushions for the next two months.  Not to mention saving their teeth from bathing in sugar on a daily basis.

If you crack your knuckles you are going to get arthritis!
Swallow that gum and it will be in your stomach for SEVEN years!
Go outside with wet hair in the winter and you will get sick!
Your face is going to freeze like that!
You know what will make you feel better when you are sick?  Not talking.

Just this morning I pulled out a perennial favorite, The vitamins are all in the crust.

This time of year, the great Santa debate rages on.  To lie or not to lie.

I have already pulled out the Santa card.

I say nothing. In my head I am wondering why this one family has to ruin everything? The Easter Bunny, the Tooth Fairy, and now Santa. It is one thing if you don’t want to do Santa with your kids, but can’t you tell them to keep it to themselves?

Before I could respond about Santa and whether or not he is real, my 11 yr old piped up, “They’re Mormon that’s why. Santa doesn’t like Mormons.”

Okay, maybe not how I was going to handle it, but it made me laugh. In fact, it continues to make me laugh every time I think about it. Admittedly, it also warms my heart a little bit that my 11 yr old, who obviously has long given up the Santa phase, still wants his baby brother to believe. So much so that he accuses Santa of hating an entire segment of the population.

I did correct him.  I told  him that Santa also hates the Jewish kids.

I corrected my son.  I definitely don’t want my kindergartner running off to school proclaiming that Santa hates people, nor do I want him believing that.  But I didn’t go as far as to tell my son that Santa isn’t real.  I want him to believe.  I want him to experience the magic that is waking up Christmas morning.  There is nothing else in life that compares to that.

Christmas, while always fun, does lose some of the magic once you know it is your parents supplying the presents.  That magic doesn’t come back until you have children of your own and are able to live vicariously through them.

To me the Santa question isn’t whether or not we are lying to our kids, but whether we are allowing them to bask in the magical thinking of childhood and encouraging them to imagine the impossible.

And on that note I must run and finish cooking dinner.  We’re have having carrots.  My children are very excited to see how many they need to eat before they can see in the dark.

Read More on Santa and Parenting: