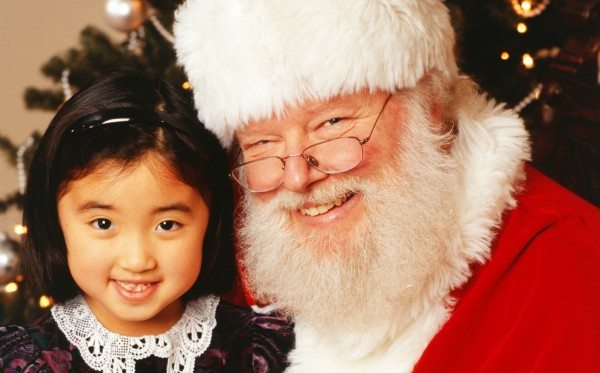 To Santa Or Not To Santa

I am curious about something. Do you and Jason try to make Santa “real” for your boys? My husband and I have been discussing this lately because this year is the first year our boys are really going to be old enough to understand all the Christmas excitement. My parents always did the Santa thing and tried to make it real for us. We left out the cookies and milk. After we went to bed, my dad must have taken a bite out of one so it appeared in the morning that Santa had been there. We even left out carrots for the reindeer. One year, I remember hearing Santa on our roof! I learned later that it was my grandma’s husband up there stomping around to get all of us kids excited. Even with all this going on, I don’t remember feeling disappointed when I found out Santa wasn’t real. So I am not sure why, but I don’t really want to do the Santa thing for my kids. It kind of seems like lying to them and I think they will have just as much fun receiving gifts knowing they are from Mom and Dad. What do you think? Is Santa part of the magic of Christmas and I am destroying the fantasy for my little ones?

OOOOOHHHHHHHHH good question. I like it very much. Even though, truly, I believe it’s up to each family to ultimately come up with the right decision for them, and for their kids. And even if we all end up coming to completely different decisions and even maybe thinking that the other family is “doing it wrong,” I personally see and understand both sides of the Santa argument.

That said, yes, we are a Santa household all the way. Here’s how we got there:

Jason and I both grew up in very, very fundamentally religious households. VERY. So of course the focus of Christmas was the Nativity story and birth of Jesus, not gifts and Santa and all that. HOWEVER, my parents did allow me to believe in Santa when I was young. I saw him at the mall and sent him letters and watched the Christmas specials about Rudolph before leaving out cookies before bed, which would be gone in the morning with a thank-you note from Santa. At some point, sure, I found out it was all pretend and it was absolutely no big thing at all. Just part of growing up, as I saw it, to stop believing in silly little kid things like Santa and the tooth fairy.

My parents’ church (and many of their friends) liked to warn them that believing in Santa would lead to me doubting in other things my parents had told me about, namely, of course, God and Jesus and heaven. Honestly, I am very grateful that my parents had more confidence in the teaching and guidance they provided for me pretty much every day of my life than to let the fear of one little seasonal fantasy completely undermining all that interfere with me just getting to be a normal, regular kid who wrote letters to Santa Claus. (And in all honesty, my extremely strict, sheltered upbringing would later interfere with what I do consider being a “normal” and “regular” kid, and THAT was what caused me to rebel and leave the majority of it behind. Blame the tenets of extreme religious fundamentalism itself, not Santa, for my current heathen ways, if you must.)

My husband’s parents, on the other hand, went in the other direction. He was told that Santa wasn’t real right from the start. This alone led to him getting in trouble at preschool when he (of course) told his classmates that their parents were lying to them and that there was no Santa. Then, unfortunately, they took it to a completely unnecessary extreme — around age five his family attended a church that declared Christmas an altogether pagan holiday and ordered congregation members to skip it entirely. So from age five until…eight or nine (when the pastor abruptly changed his mind on the subject) my husband was denied Santa AND a tree AND presents. And to this day, that’s pretty much exactly how he sees it: Being denied something fun and magical and “normal” from childhood. (I mean, please note, this was an EXTREME situation that went waaaaay beyond just “not being told the Santa story.”)

I entered motherhood without strong feelings either way about Santa — I mean, I have very fond memories of it from growing up, but I was naturally a very imaginative kid who never had much a problem separating fantasy from reality, and I recognized early on that this wasn’t such an easy thing for Noah. Plenty of kids at Noah’s school celebrate Hanukkah instead, so acceptance of different beliefs is practically built into the December curriculum. I figured we could easily explain Santa in a respectful way that would not lead to him accidentally crushing his little friends’ dreams. And yeah, it is essentially a culturally-sanctioned lie. I definitely see the potential for problems.

But Jason…well, there was no question about it. He didn’t “get” Santa as a kid, so by God, his kids were going to GET SANTA.

And so, we have Santa. Magical childhood fantasy or therapy for us to work out our own baggage? Probably a little of both. Ezra doesn’t yet get the concept, but Noah has for two years now and you know what? It’s delightful to watch. I adore it. It just warms my heart and makes me feel so…GOOD. He gets so EXCITED. It’s all so MAGICAL. He’s so focused on being NICE and not NAUGHTY and counting down the DAYS and is it time to make the COOKIES yet, Mommy? We have an app on our phone where Santa can “call” Noah and praise (or warn, but he takes it a little hard so I never use that one) his behavior. We went online to “research” what reindeers eat so we could leave the right food out and he sometimes goes over to the chimney to holler up a report about how good he’s been that day.

Someday, he won’t believe in it anymore. I won’t get my yearly photo on Santa’s lap anymore. He’ll roll his eyes at us and ask for a gift card or something so he can go shopping without fear of us buying him something embarrassing. Someday he’ll know that none of it is real — from Gabbaland and Star Wars to Harry Potter and Tolkien. But I hope that someday after that, he’ll maybe appreciate that there was a time when his parents were capable of giving him the gift of magic, of making it real for a few short years, and that we did just that, while we still could.