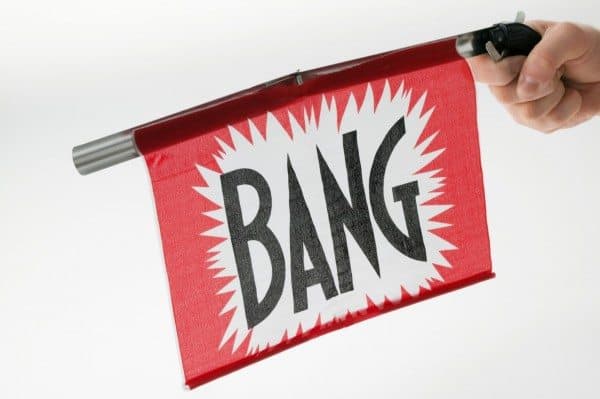 So with Christmas fast approaching, I am curious what your thoughts are on this issue. I recently learned that my mother-in-law decided to purchase toy guns for my two young sons as gifts this year. We are not talking neon-colored-nerf-type variety guns, but rather realistic-looking-wooden-shotgun-type toy guns. And when I say young sons, I mean they are really young – 1.5 and 2.5 years old actually. Honestly, before now I never paid much thought to toy guns and what my stance on the issue would be. I think that is because I thought I had some time before I had to worry about that and figured we’d cross that bridge when my boys became old enough to, oh I don’t know – ask for a toy gun! I am kind of sure that they have no idea what a gun is right now.

My gut reaction to learning that they are receiving these guns as a gift this month was that I don’t want them to have toy guns. At least not right now. My mother-in-law babysits my kids on a fairly regular basis, so I was thinking that when they get these guns I would suggest we keep them at her house. If they came home, I would likely hide them away or quietly dispose of them somehow. I am not sure if the idea to keep them at her house solves anything though because if I don’t want them to have a toy gun at this age, then what does it matter where they are when they are playing with them? When I mentioned this to my husband, he thought I was overreacting and that it was not such a big deal. They’re just kids and lots of kids have toy guns, in fact, he had toy guns as a kid. Not surprising considering that my mother-in-law is his mom! Ha!

So I think you let your boys play with lightsabers, am I right? Do they have toy guns too? Am I overreacting here? Is playing with guns/weapons just normal and expected when you have boys? Don’t I have the right to veto gifts if I feel they are inappropriate?

Ahhhhh, this is such a sticky, intricate sort of mess, but one that I think a LOT of parents have struggled to sort out their feelings on the matter.

Once upon a time, I decreed (and my husband readily agreed) that there would be No Guns As Toys in our home. Call me naive, unrealistic or a big bleeding heart wussy-wuss person, but I don’t like guns. I don’t like the idea of guns as toys. I don’t like the sight of small children running around screaming BANG BANG YOU’RE DEAD AND FULL OF BLOODY HOLES HA HA HA.

And we stuck with that ideal for as long as possible, though we usually assess the toys on a case-by-case basis. (Like you said, I don’t get too worked up about those over-the-top Nerf water shooter toys that don’t really resemble a gun — though we don’t actually own anything like that currently, either.) We were lucky that our parents usually ask for gift ideas/suggestions ahead of time, so we were able to communicate our preference about weaponry-related play. One Christmas, when he was barely three, Noah received a laser gun toy from someone, and it was loud and annoying we simply said “thank you!” and left it in the package…and somehow, mysteriously “lost” the toy between the grandparents’ house and our own.

Other than small safety glowsticks, the boys actually don’t own “real” lightsabers — I know it’s hypocritical to split hairs in the guns vs. swords thing, but I kind of do, and yet…I also try to keep them away from ANY toy with the specific design purpose of fighting and whalloping your brother. They play rough enough already. I don’t need to ARM THEM to encourage dramatic play in that area, for sure.

But. Still. We used to remove the toy guns from Noah’s Star Wars Lego sets — in part for concerns over Ezra choking on them — but then we forgot to do that enough times that he has quite the collection and enjoys posing the minifigures with the “correct” weapon and such. And over the summer at camp he learned that hey! You don’t even NEED a toy gun! Just point your fingers *like this* or hold Mommy’s hairbrush *like that* and PEW PEW PEW.

So in that regard, yes, play guns and little boys are kind of inevitable, in part because not all parents will share your views on what’s appropriate, and in part because…well, Exhibit A: We Let Our Four-Year-Old Watch Star Wars, What Did We THINK Was Going To Happen Once He Saw How Awesome Han Solo Is? I still believe I have the right to vet their toys, though, ABSOLUTELY, and so do you. My kids routinely do not see certain contents of certain birthday party goodie bags, for example, and some past gifts have ended up returned or in the donate pile for a wide variety of reasons. I still have no intention of allowing our house to become as heavily armed as the OK Corrall, despite the handful of “eh, whatever” concessions we’ve made.

If you believe your boys are too young to play with realistic toy guns (and I would agree, given their ages), then you have every right to either tell your mother-in-law that actually, you would very much prefer that she hold those gifts in a closet for a couple years, for when your kids are older. Or to simply make the toys magically disappear after Christmas morning. (Even if she were to inquire about the whereabouts of the guns later, we all know that toys get lost, left at the playground, shuffled to the bottom of bin of unrelated items, or broken. Sorry!)

I agree that having her keep the guns at her house doesn’t solve a thing — you know they’ll be the first thing she brings out and they’ll quickly become something “special” that they don’t get at their own house. Like my kids at my parents’ house, where they recently discovered the Frankenfood-like existence of Non-Fat Non-Dairy Cool Whip. It’s annoying your husband doesn’t have your back on this, though perhaps you could just ask that the two of you set a compromise for when you think the toys would be a bit more age-appropriate, and that he communicate this to his mother. So she thinks you guys are unrealistic and overreacting and we-all-played-with-guns-and-turned-out-fine. (Actually, I NEVER did, and almost all of my neighborhood playmates were boys. I’m sure we pantomimed guns and arrows and used sticks as swords, and did just fine without the actual hardware.) It probably won’t be the last time she disagrees with your parenting choices, but you’re completely within your rights to make those choices and ask that others respect them…and not mock you too badly when you maybe end up compromising on those choices in a couple years.