Twitter Facebook Pin It Email Article
Prev Ghost of Pregnancy Cravings Past (& Present) Next Swaddling Blankets: The Good, The Bad & The Useless 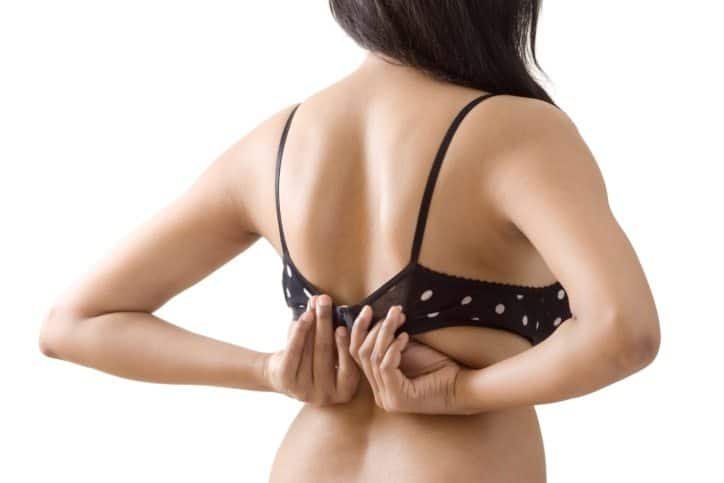 First, I love your columns. Zero to Forty helped me keep my will to live during the first trimester of my pregnancy.

Here’s my problem: I have small boobs.

Or rather, I HAD small boobs. And then I went and got myself knocked up.

My bra size was 32A on a good day. Most of the time, I didn’t even bother, because there was really nothing “there” to be supported. My bras were pretty much decorative, not functional. And, to be honest, I felt good in that kind of body. I liked the clothes I wore then. In the summer (I live in the deep south) I wore strappy sundresses and tank tops. When my husband and I went on a date night, I loved wearing backless dresses.

Enter baby. Four months ago I had my daughter, and I love being a mom. I’m now close enough to my pre-pregnancy weight to fit into my jeans. YAY! I feel good, and I’ve pretty much recovered from labor and delivery. But my boobs are…well, huge, by my standards. In the beginning of nursing and all that I had some pretty major engorgement, which has settled down now. But my boobs are still WAY bigger than they have ever been in my life. I went and had a bra fitting the other day, and I’m wearing a 36C when my boobs are empty. I have no idea how to dress my boobs now. I become completely baffled when I’m shopping for clothes because I don’t have any good idea of what styles will work with this new body type.

And before you say anything, I do realize that I am complaining because my boobs are TOO BIG now and WAH. But I’ve never had the opportunity to dress with cleavage. Bras have always been optional, and I’ve certainly never had to deal with LEAKING boobs. Most of the time, because I don’t want to deal, I just wear a nursing tank with a shelf bra and a t-shirt or a sweater. But I miss wearing dresses and lighter weight clothing (especially since yesterday the temperature got up into the 90s, and it’s early May!) I also find myself strangely self-conscious about showing off the cleavage. Am I doomed to thick-strapped tanks and bras for the entire summer? Or is there a better way to dress that will leave my boobs supported and my front dry?

Thanks for the help!!

Adjusting to Your New Cleavage

(Yes, I’m poaching from the Advice Smackdown queue for Bounce Back topics. Why? BECAUSE I CAN. Seriously. Just try and stop me. Are you trying? See how it’s not working? MWA HA HA.)

Ahem. Anyway. Yes. As a fellow flat-chestian who swelled up to enormous (by my standards) C-cup proportions while nursing, I can thoroughly sympathize. Having boobs definitely complicates things, and eliminated a huge segment of my wardrobe. I never really thought that I favored low-cut tops, but there, in the mirror, was an obscene amount of cleavage where there had once been…my flat, inoffensive chest bones.

So postpartum dressing was double complicated — I wanted shirts with access, but I also wanted to keep things PG, more or less. And I DIDN’T want to spend a fortune on a whole new wardrobe, because I knew these boobs were not mine to keep. (Personally, my chest shrunk down to a reasonable B-cup once Ezra started eating a good amount of solids, and immediately snapped back to an A-cup once he weaned.) (Likewise, I predict your leaking problems will end fairly soon. If they don’t, talk to a lactation consultant about strategies for oversupply.)

It’s debatable as to which strategy is more cost-effective: Just buying different clothing or buying specialty undergarments that will make backless or spaghetti-strapped dresses possible. Lingerie — nursing or otherwise — is EXPENSIVE once you leave the small-boobed sizes that you can easily find everywhere from Gap to Target to Vicky’s. I did invest in a good strapless bra while I was nursing — that allowed me to wear some of my pre-pregnancy dresses — and I bought a padded one. Not because I wanted to look BIGGER, oh lord no, but the padding meant I could skip the nursing pads. Even the best strapless bra will need to be hiked up occasionally, and I really, REALLY didn’t want to risk nursing pads staying in place while the bra inched southward.

I also ditched nursing bras after a few months — basically once I no longer needed to SEE Ezra latch on to know if he did it right, and once he was pretty much able to get in General Boob Vicinity to get himself on by himself. Your nursing-bra style choices are just too darn limited, and very not summer-clothing friendly. Full, high coverage cups, wide straps, nursing hooks that are often visible over the top of a tank top. I topped out at 34C, which was still doable in some of the prettier styles with smaller cups and thinner straps. I got pretty good at either yanking the bra cup down or pulling it up-and-over, depending on what sort of top I was wearing.

A Good Bra is a Great Start

Two other gadgets allowed me to wear a few more pieces of pre-preggo clothing: those straps that turn any bra into a racerback, and a cleavage-masking bandeau/tube top. It’s one thing when your teeny skinny bra straps peek out from under a tank top, it’s quite another when the straps are big and wide and substantial. The clips are often marketed as “cleavage enhancing” which…not really, though it depends on where you cinch the bra in the back. If you clip it high, you might see a little bit of lift in the front, so I usually clipped it low and layered a higher-necked tank underneath. (Old Navy tanks are your friends! Dozens of neckline and strap-width choices! For cheap!)

I’m going nuts trying to find the bra-cover bandeau that I have — I bought it at a local boutique place and can’t seem to find it online — though it’s really about as basic as you can get. A t-shirt-like elastic tube top, designed to go over your bra and cover those crucial top inches of cleavage without having to add an entire tank or layer of clothing. (Alternatively, if you own a Belly Band from your pregnancy, you can yank that up over your torso and see if that works.) I seem to remember seeing these in the nursing sections of some maternity stores, though mine was not marketed as a nursing accessory — just something anyone a little busty might find useful for making clothing a little more modest. I still use mine…when I don’t feel like wearing a bra but want some insurance against flashing while bending over or if Ezra yanks on my shirt or something.

But honestly, my biggest advice is to ENJOY your new body. Don’t feel like you have to go out and buy big baggy shirts and high-necked dresses to hide it. Just like I am 100% in favor of maternity clothes that show off curves, I also don’t think that milk-filled boobs should likewise be hidden away all the time because OMG THEY’RE FUNCTIONAL AND THEREFORE UNSEXY YET OBSCENE. I wore a lot of v-necked empire-waisted dresses — sundresses, but with slightly wider straps than I typically looked for, and henley-style tanks that I could button and unbutton depending on my bra and/or how daring I felt like being that day. You probably won’t be comfortable going braless, so yeah, the backless dresses will stay in storage this summer. But if you can find at least one or two non-full-coverage bras that fit, there’s no reason you can go out to dinner with your husband wearing something scandalously low cut. He won’t mind, I am quite sure.