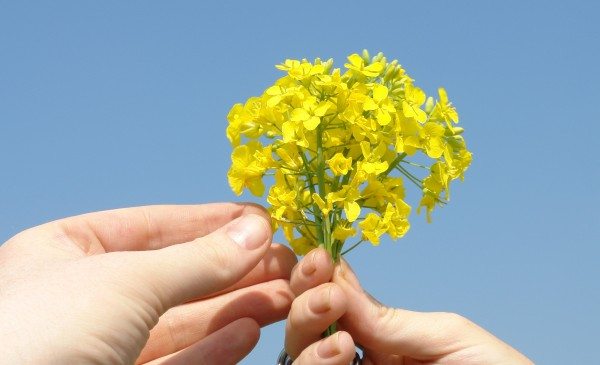 First, I would like to thank you for always steering me in the right direction; be it love, eyeshadow, or how the heck to get those cloth diapers to COME CLEAN ALREADY. So, given that you’ve proven to be a font of useful knowledge, I thought perhaps you could help me with a slightly more sensitive dilemma.

Seven years ago, my husband lost his mother to breast cancer. He loves her dearly, and to this day, can rarely speak about her without tearing up. I never had the pleasure of meeting her, but know she must have been one hell of a woman because she raised a thoughtful, kind, loving man who is a wonderful father and husband.

My dilemma is that although we have been married for three years, we have never spent a Mother’s Day together, as he is a Merchant Marine and has always been at sea for this particular holiday. He’s always been thoughtful and tried to send a card or flowers if he was able (sometimes that’s a little difficult to do from the middle of the Atlantic), but this is the first actual year we get to celebrate it together! I am so very excited! My first two Mother’s Days were, well, less than desirable. Taking yourself out for brunch on Mother’s Day with just you and your baby, watching entire extended families at the tables around you toast their moms is probably not on the Top Ten ways to spend the day.

Now that we’re finally together for it, I would love to celebrate our little family by doing something nice. And, by ‘nice’ I don’t mean a huge, fancy brunch at a ridiculously overpriced restaurant–I’m talking more “grill up some tasty grub while spending the day playing horseshoes and sipping mimosas” kind of thing.

He is, however, less than enthused. He said he would invite people, but still hasn’t. He’s dragging his feet on making any decision about when, or with whom we’ll celebrate (if we do anything at all), and right now it looks like if anything is going to happen, I’ll be planning/buying/cooking for the whole thing. I know his reticence is coming from not having his mother here, and the very last thing I want to do is reopen wounds.

Am I horrible to want to do something special for Mother’s Day, which might be very painful for him? Should I just let it go and call it a wash in favor of sparing his feelings? Or, should I just ask that, “hey, it took me nine months to grow our little bundle of joy, I don’t think tossing some steaks on the grill in celebration of that, and of our little family, is too much to ask”?

I know you recently lost your dad, and I am so very sorry about that.Your posts about him have always been filled with love and admiration, and I have thoroughly enjoyed reading them. I hope this letter doesn’t bring up any more pain for you by reading it. I truly just need some help here in figuring out where the line is between being realistic and being selfish, and how to ask (or if I even should ask) that he really put forth some effort.

(I feel like I should note in here: most other holidays we really do tend to go all out and his behavior right now is pretty much an anomaly.)

Thanks in advance for taking the time to read this, and I wish you a very Happy Mother’s Day!

Hmm. Unfortunately I am not a mind reader, and I really don’t know what’s going on inside your husband’s head — is this really about his mother, after seven years, plus after he apparently was at least quite capable to do what he COULD for you on the last two Mother’s Days, by sending cards and flowers? Does he have some “going all-out” surprise up his sleeve that differs from your suggestion so he’s acting deliberately obtuse about everything? Does he just not get that (despite not asking for the expensive meal out) this is really, really, REALLY important to you?

Obviously, everyone grieves differently. I fully admit that last Father’s Day — my first without a dad — was very hard, and not one of my best efforts for making sure the day was good for Jason. (Though it also didn’t help that it came a mere two weeks after I gave birth to a baby, and just a couple days before Jason’s birthday and gaaaaaaaaahhhhhhh too much too much system overload shutting down now, bye.) But I’d been celebrating Father’s Day for both my dad and Jason for quite a few years before he died, so the holiday had already been established as “both.” Losing my dad did not necessary mean losing the meaning and point of Father’s Day, because I still had the father of my children. (I plan to do a MUCH better job this year, I hope.)

Your husband’s situation is different, and while I don’t want to say what’s appropriate grief and what’s excessive, I also don’t think you’re being out of line here. You’re a mother now too. I completely understand wanting to celebrate the day, Hallmark or not or whatever. For him, it could be a new beginning, a new type of holiday. Something more like a second Valentine’s Day, I guess.

But really, the only way through this is to talk to him, not me. Be blunt and honest that you’re feeling a little hurt at his stalling and lack of effort, even though you’re doing your best to understand why. Is there something he’d like to talk about? A particular reason why his grief stings so hard this year? Is there something you guys could incorporate into the day’s festivities that would also honor his mother? Buying her favorite flowers, making one of her best recipes, sitting down as a family with a photo album and telling your toddler a funny story about his wonderful grandma? Or, if all that would make things even worse, is there a way you guys can focus on making this something completely new and your own? (Forget the calendar and celebrate on Saturday! Call it Wife Day! Vow to reschedule it randomly every year from now on so you’re never “alone” on Mother’s Day, because Mother’s Day is whatever Sunday you want it to be, whenever he’s home!)

What NOT to do, however, is to sit around and quietly seethe. Or go out and plan everything only to spend the whole party feeling vaguely pissed off because he made you throw your own Mother’s Day party grumble grumble silent treatment. Just…talk to him. Ask him if you’ve asked too much of him for Mother’s Day (maybe he’d be more comfortable just buying you a gift or a spa day certificate than negotiating guests lists and menus?), but also don’t feel like you need to downplay the fact that hey, honey, my feelings will be hurt if our first Mother’s Day all together ends up resembling the first two, because I was really, really excited about it. Can we talk about why you’re dragging your feet so much?

That said, the best Mother’s Day I’ve had was the one that started with breakfast in bed, and then I went shoe and lip gloss shopping completely by myself. Later we all took the kids out for pizza. IT WAS HEAVEN.