Twitter Facebook Pin It Email Article
Prev Hashtag: ChooseKind. (Showing Kids How to Make an Apology and Accept One) Next The Weight Of Missing Someone 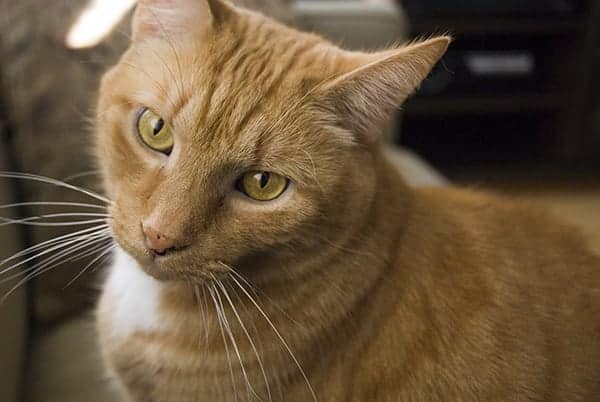 (Editor’s Note: please be aware that this post is a personal account of saying goodbye to a longtime family pet because of illness.  Whereas we have used our best judgment to be sensitive it contains stories and pictures that may be difficult for some to read and see.)

We probably shouldn’t have stopped by the shelter that day especially since I am and always will be a crazy cat lady. But they had a kitten room and I couldn’t say no to a kitten room. In the kitten room, kittens literally crawl all over you. If you ask me what heaven might look like, this is it.

This was in 2003. Both Toby and I were just a family of two, pre-kids. We were young and in love. We already had two cats, so we had no intention of adopting another. We just figured we’d stop in and say hello.

We hung out for an hour, maybe longer. As we were leaving, something jumped onto Toby’s butt and clung to him like Velcro. He turned to look and there he was, a tiny oddball of a cat, orange and gangly looking, hanging on to Toby for dear life. Toby looked at me, shrugged and said, “I guess we’re adopting a cat.”

That’s how Tucker chose us.

We lived in D.C. at the time. He hit it off with our cats but annoyed the hell out of the two of us for the first few months. He played with our feet as we slept. He nursed on Toby’s earlobe. Tucker would pounce on anything that moved. I remember lying very still at night hoping he wouldn’t attack one of my barely moving limbs. He was such a rambunctious kitten. One time, he attacked a lightning bug and our apartment looked like a glow in the dark murder scene. Tucker was one of a kind.

Our cats moved everywhere with us. A cross-country move from D.C. to San Francisco and then San Francisco back to Brooklyn, they drove alongside us the whole way. Tucker outgrew his goofy kitten look and morphed into a most handsome orange boy.

Tucker always answered when you called his name. He also always answered when he heard the can opener. I loved that about him. I also loved how proud he was. He had such dignity. His coat was unbelievably soft, which he took great care of. He was our alpha cat. He took charge of the household. He looked after his fellow cat friends. He was strong and powerful. He was beautiful.

There’s just something about those Orange Guys. 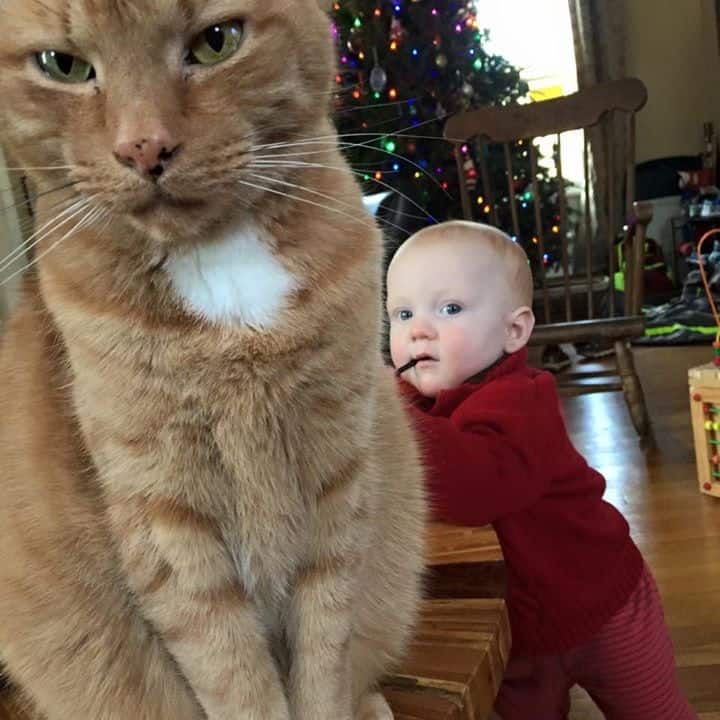 Years passed and we turned into a family of five. We welcomed three little boys into our lives and our cats became their friends too. Tucker and our oldest son, Emory, became inseparable. Tucker often slept with Emory, especially after we adopted our dog and she took claim over our bed. On many nights, Emory’s thoughts and dreams would be visited by ghosts and monsters and he would scream out to us. This was almost always escalated until one of us would get up and sit with him until he’d fall back to sleep. I’ll never forget the one night, it was about 3 AM and he let out one, “MOM!”. I woke, but immediately fell back to sleep. The following morning he said, “Hey mom. Wanna know why I stopped calling for you last night? It’s because Tucker came in and I felt safe again.”

Tucker was his buddy.

About five years ago, we had a scare and Tucker got really sick. We had to rush him to the hospital for surgery. At the time, I thought we might have to say goodbye and I did my fair share of crying. But then Tucker pulled through! The surgery was a success. When we brought him home Emory asked me, “Mom, how will I get to sleep when Tucker dies?”

Thankfully, Tucker lived another five years and Emory has grown up a bit. He no longer wakes up screaming for us. And while Tucker still slept with him, there wasn’t the same urgency, like a baby outgrowing their need for a “lovey” in order to sleep. And while Emory never outgrew his need for Tucker, he was able to outrun some of those monsters and ghosts on his own.

A couple of months ago, we noticed that Tucker could no longer walk up the stairs. He still ate and drank and used the litter box, but he was losing some of his pride, all the things that made our Orangeman, Tucker, were starting to diminish. He moved from his special spot in the living room, under his favorite chair—the same chair that Toby would later use to cradle him during his last breath—to the kitchen where he would eat. I took him to vet and he came back with elevated kidney function. We put him on a special diet to treat as much and hoped for the best. 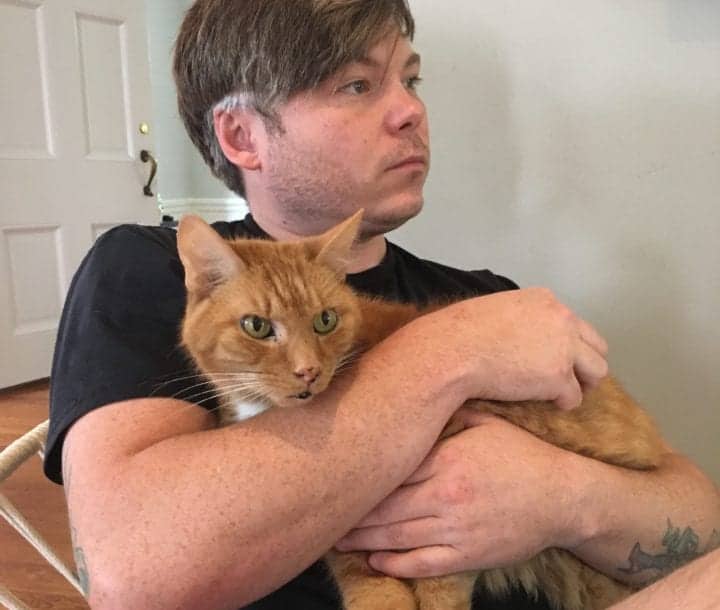 A month passed and we noticed he was having trouble breathing. It wasn’t life-threatening (yet) but he seemed to be working harder than usual. We waited and things became worse, so my husband took him to the vet and called me to say that he was suffering from heart failure. We were given the choice of rushing him to the ER and working on prolonging his life by a few months. We’d been through this before with a cat I had in college, who later became Toby’s best friend. We put him through so much the last week of his life, hoping he’d pull through. But at the end of seven days, he died in the pet hospital. Not at home surrounded by the people he loves and the comforts he’d relied on. I vowed never to do that again.

It was time to say goodbye.

The vet drained a pint of fluid from his chest and he was a lot more comfortable, but the fix was temporary. It allowed him to come home for one final night of snuggles and so we could say our final goodbyes. We scheduled an at-home pet euthanasia for the following day.

That morning, an hour before the vet was to arrive, Emory asked if he could give Tucker some milk. He’d been given milk before, and absolutely loved it, but we were told it might upset his stomach, so we stopped.

“Can I give him one last treat?” Emory asked me, tears streaming down his face.

Emory opened a new container of milk and served Tucker one final treat. 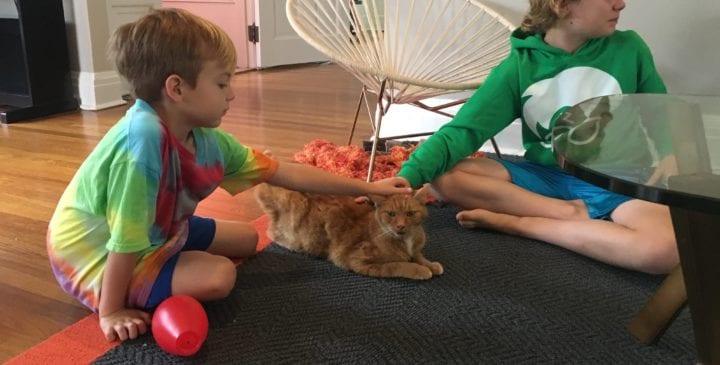 I went back and forth on whether or not the kids should be in the room when he took his final breath. Toby and I discussed it. I even asked my Instagram friends for input. Responses were mixed. Some felt it wasn’t appropriate and it might needlessly upset them. Others felt that culturally we spend too much time avoiding the reality of death and that showing a child what it’s like to say goodbye, and humanely, would be a life lesson in compassion and how things aren’t permanent. In the end, we explained everything to them, how it would happen and what it would look like and we let them decide. All three boys, ages 4, 7 and 11, chose to stay. 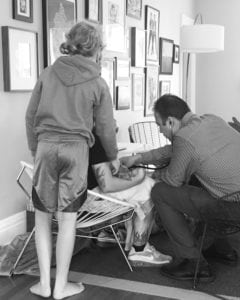 As a parent, making decisions on behalf of our children, isn’t something I’ve been very comfortable with. And over the years I have made some choices that I have come to regret. And I am certain I will make many more. But that’s in the job description and with every decision, I learn something new. But when it comes to letting our boys watch Tucker pass, I believe we made the right one.

Letting them witness Tucker take his last breath was good for them. Yes, there were a LOT of tears and a great deal of sobbing. The room was drenched in sorrow. But Tucker was surrounded by everyone who loved him and everyone he loved. He died surrounded by his people, the people he chose over a decade ago. And when the vet nodded and quietly called out his time of death, all of our emotions, all the wait and worry and heaviness we’d been holding, it all lifted. It’s as if we’d all been holding our breath, afraid of what was to come, afraid of how things would end up. And in the end, he rested. And to some degree, so did we.

(Gosh, we miss you, Orangeman.)

Yesterday, as I was opening a can of black beans, I lost my breath entirely. A relatively mundane act, stopped me cold. I would’t ever see Tucker again. I could open every can in our pantry and he won’t show up. Ever again.

You see, that’s the thing: saying goodbye to a pet is more than just that, it’s also about watching a part of your past die, a little of your future as well. All the things they did, the little things you grew so used to and fond of, the little things you took for granted. All of the every day comforts they bring  you, that’s all gone. Those things won’t ever happen again.

(Forgive me, I need to step away for a minute. Stupid can openers.) 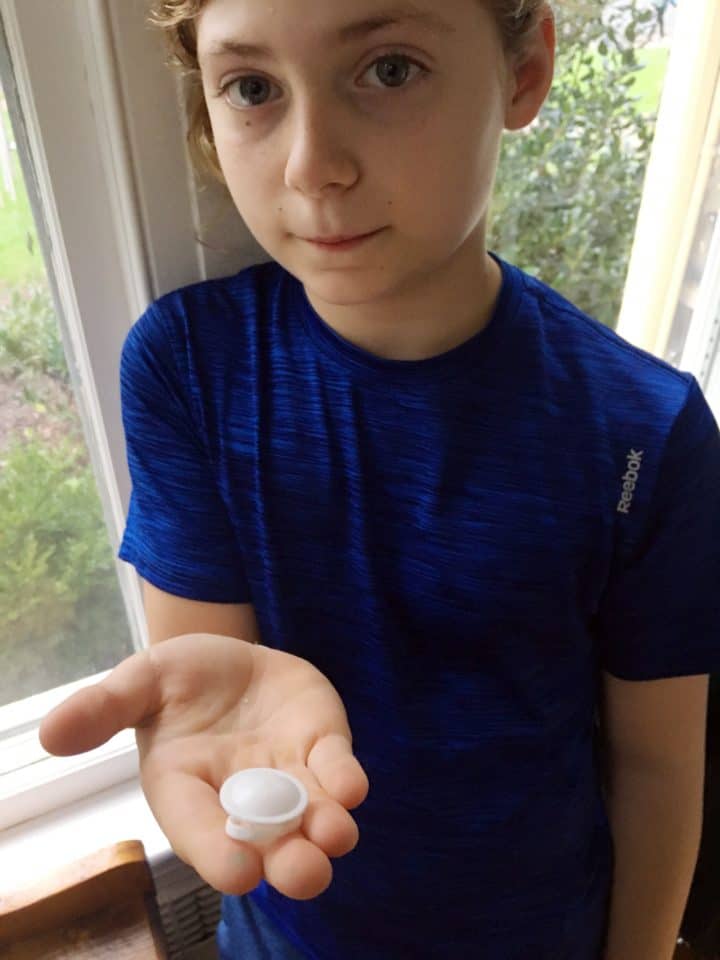 A few days after he passed away, I noticed Emory was wearing the little round piece of plastic one removes from a new milk carton. He was wearing it as a ring. I asked him about it and he said, “This is how I hold Tucker close to me. This is how I remember him.”

(Thank you for choosing us, Tucker. We miss you so much.)

I’m very, very sorry for the loss of Tucker. As a fellow crazy cat lady, I have had the privilege of being owned by five cats. I have been devastated by the deaths of my first three cats, in just the way you describe here. We now have two senior cats and one aging dog, plus 4-year-old twin boys. I have always dreaded the day that we not only experience the loss of one of our pets again, but have to help our boys through it. I tell them bedtime stories about my “once-in-a-lifetime cat”, Lemieux, in an effort to… Read more »

Thank you for this, Shawnee. Thank you so much.