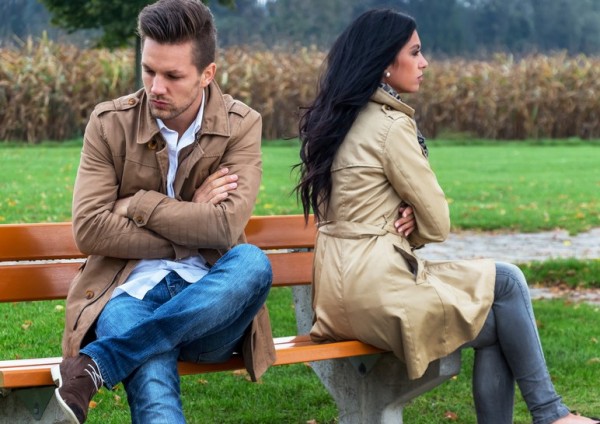 Co-Parenting in an Unhappy Relationship

I’ve been reading your blog for a couple years now and always find what ever advice I am usually looking for. I am a mommy to a beautiful, sassy, smart one year old girl. I work full time, am going to college and maintain all of the household chores. My live-with boyfriend of 3 years is a new business owner and a great father. He is very driven, motivated and hardworking and like I said, a great dad to our daughter — they adore each other.

Notice how I didn’t mention “great boyfriend.” We have had our share of ups and downs throughout the years and have almost called it quits a few times, yet we always end up holding on. Don’t get me wrong, we have our good days and can make each other laugh like crazy and are very comfortable together. But man, do we fight. I feel that we have completely opposite personalities and we fight about everything! From money (He insists on separate accounts), to parenting (He’s tough love, I’m not), and everything in between. I also feel that he has created a wall between us by lack of communication, keeping our money separate and he “I’m just not ready to get married” mindset.

There are days that I absolutely want to marry him but I as much as I hate to admit it, I don’t know if it’s because of the right reasons and I don’t know if we should just try co-parenting as single adults. Sometimes I feel that’s how we do things anyways, just living under the same roof. Please help me see if I’m just feeling normal growing pains of a relationship and I need to just tough it out or if we are heading down a never ending path of unhappiness?

My gut feeling (admittedly based on a very short letter) is that you have a little from column A (normal growing pains) and a little from column B (never ending path of unhappiness). BUT. The longer you continue to more or less ignore column A and accept the current situation, column B is going to start looming much taller, and eventually take over.

In other words, I think this relationship CAN be saved, but it’s going to take work, and you BOTH have to be willing to do the work. It going to require couples/relationship counseling and professional help to tear down that communication wall, and coming to compromises via open, honest discussions that DON’T devolve into arguments. And an emphasis on true compromise, not just one of you giving in to the other in order to avoid the fight (and/or because you think letting your partner get his/her way will “help” the relationship), meanwhile you’re burying seething, endless resentment.

Look, every couple fights about money. And most of us have different parenting “styles” and need to find a way to co-parent as a united front. And I certainly didn’t marry my personality twin either. These are not dealbreakers in and of themselves. What IS a big problem is the pattern you describe of almost calling it quits because you’ve been having the same damn arguments over and over again with no resolution in sight. And in time, YES, those fights can and will undermine the good things you share with him, and the things you love about him.

On the other hand:  “We have a child together and live together and there are days when I absolutely want to marry him” vs. “I’m just not ready to get married.” THAT’S a big-ass problem, right there. That’s something I feel like should’ve been worked through by now. If the plan was to get married and you both genuinely wanted to be married…well, you’d probably be married. Right?

And while I’m far from old-fashioned about modern life and families, your boyfriend is not scoring any points with me here with the “I’ll live with you and have a baby with you but a joint bank account?? OMG no.” business. Separate accounts can certainly work for some households but it should at least be a joint agreement, because otherwise it breeds distrust (what’s he hiding?) and resentment (who makes more money or who pays for more things or who isn’t pulling in their equal financial weight). At the very least separate personal/business accounts that each fund an agreed-upon household account (with a clear, organized budget) might be a compromise that solves some of the money disagreements.

But I’m officially reaching beyond my pay grade and qualifications (as in: None At All) here. You guys need a therapist or counselor. Who you see, together, as often as it takes until you’ve sorted out both your specific fight topics AND the underlying foundation problems (communication, compromise, and a real connection as a romantic couple, rather than co-parenting roommates).

And if the thought of going through that prompts a “ugh no thanks I’d rather just break up” reaction in either of you, that’s definitely a pretty clean sign that Column B is a bigger problem than you’ve been willing to admit. And I am in no way an advocate for unhappy people staying in unhappy relationships, and especially not “for the sake of the child.” BUT. Because you guys DO have a child, I DO believe you owe it to her to ensure that you’ve given your life together every possible shot before calling it quits. Couples therapy might really change things for you, for the better. Or it might very well put your relationship under a super-realistic lens where you can see that co-parenting as single parents is, in fact, the right choice. But as long as that first outcome is in the realm of possibility and something you both want on some level, it’s worth working for.