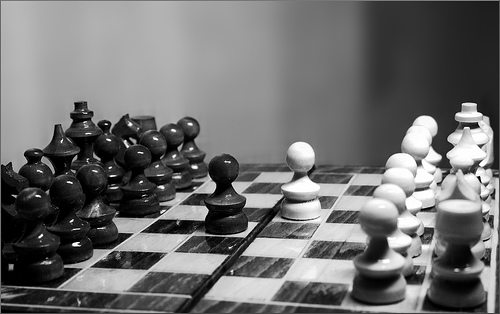 So you’ve gone and had yourself a baby. You’ve officially created your very own new family unit. A wacky spin-off, as it were, with occasional Very Special Episodes featuring cameos from the crazy family members from the original series. Only for November sweeps, though. And then major holidays. Maybe the occasional long weekend or unannounced pop-in. The next thing you know you’re living directly across the street from them and everybody keeps calling your husband RAAAAYYYYMOND and you’re wondering whatever happened to that “very own family unit” idea you once had.
Having a baby can really complicate your relationship with your parents and in-laws, is what I am saying. Once you come into possession of TEH GRANDBAYBEE, things change, and you may feel like you’re blending into a new family all over again. As a helpful guide, I’ve identified and classified four of the more troublesome varieties of grandparent.

Also known as the “UR DOIN IT WRONGS,” this variety of grandparent cannot resist telling you exactly how you are screwing up (usually based on the way they did things some 30-odd years ago). You may catch them going explicitly against your stated wishes, at which time they will feign shock and surprise and tell you how they did things some 30-odd years ago, when child raising was perfect and practically down to a science. They know everything about all of the following topics: breastfeeding, bottlefeeding, sleeping, feeding, burping, dressing, leaving the house, colic, and diaper rash. They will not ever figure out the straps on your carseat, but that’s okay because they just duct taped babies into Moses’ Baskets back then and their kids turned out just fine. Of course, THEIR babies got extra bottles of water and wore waaaaay more pairs of socks than yours does, so that probably had something to do with it. Learn to pick your battles and delegate ultimatum-delivering with your partner, because TRUST ME, it doesn’t end after potty-training. (Which you’ll want to have done by 12 months old. In a day. I mean, it’s so easy. I don’t know why you’re having so much trouble. Hmmm.)

Also known as the Checks & Balancers. These parents and in-laws lock themselves into a deep mental game of grandparent oneupmanship. Who saw the baby first, who saw the baby the most. Who gave what gift and how much they spent. Where you spent Thanksgiving and how many days you spent where at Christmas. Particularly common in families that feature divorce and remarriage, or where one set of grandparents have a geographic advantage. Quite often, the competition only exists in a single grandparent’s mind, but as far as I can tell they plan to keep on playing until they outlive all the other grandparents by SHEER COMPETITIVE WILL ALONE.

But hey, doting-but-misguided is better than disinterested, right? Some grandparents can break your heart by being the complete opposite of what you hoped to have for your child. Traveling to see you is too darned inconvenient, except for that one Alaskan cruise they planned for the same week as your due date. They never really want to hold the baby or hear about the baby and refuse to open your photo attachments because you might give them a computer virus. Some of them, given enough time, may warm up to your child once they become a person and thus less of a disruption in their home and routine, but for some it might be worth finding some surrogate grandparents in the form of some kindly neighbors or nursing home residents who will THRILL at the sight of your baby. It can be hard to swallow and say “it’s THEIR LOSS” when you don’t get the relationship you were expecting or craving, but…it really is.

Oooh, way to end on a down note, Amy! But again, sad but true. Sometimes bad parents become bad grandparents. These may be folks who insist on smoking in front of the baby, or who can’t be trusted to not drink themselves into a stupor while babysitting, or who believe in spanking and to hell with your wishes. Your mother-in-law may have always disliked you, but now that there’s a grandbaby she seems beyond hellbent on splitting your marriage up, in hopes that she’d be awarded custody in BizarroDementiaLand. Your father starts chastising your sensitive son with homophobic slurs. You (or your partner) may suddenly have a firmer grasp on abuse you suffered as a child — stuff that now you realize you could never in a million years do to your own offspring. You may be torn and conflicted about cutting them off or restricting access to their grandchild, but here’s the thing: Your role as your child’s mother trumps ALL ELSE, including your role as your parents’ daughter.

Not really one of the four “troublesome” types, because really, if the worst thing my kids get at Grandma and Grandpa’s house is two extra books at bedtime and some high-fructose corn-syrup yumballs and effusive praise for their EXPERT AND OBVIOUSLY GIFTED dismantling of the vacuum cleaners, I think that’s actually pretty okay.