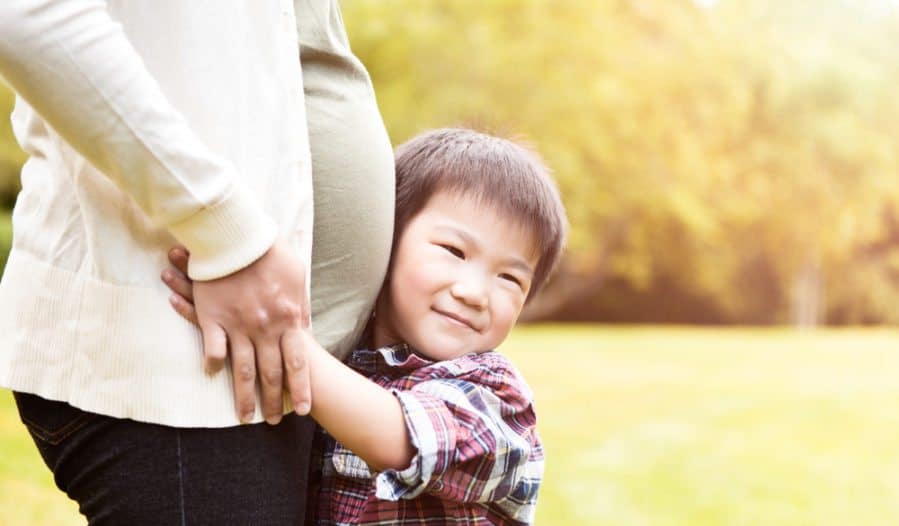 When to Tell Your Preschooler You’re Pregnant

I’m a longtime listener, first time caller… I think I first found you (and Alpha Mom) in a haze of cloth diapers about four years ago. You’ve been there for me through thick and thin…Ellyn Satter. Potty Training. Secondary infertility and clomid. Now I’m hoping you can help me with my next big dilemma.

When do we tell my four-year-old that he’s going to be a big brother? The baby is due a few months before his 5th birthday. We plan on telling family/work/friends around 13 weeks, if all continues to go well. (6 more weeks of winter, I mean morning sickness.)

So the question is: should we tell the kid first?

On the one hand, he tends to ruminate on things if he has too much advanced warning, so my husband wants to hold off on telling him as long as possible. But I’m concerned that he might find out accidentally from someone else, and that would stink.

To further complicate matters (at least in my mind), I’m also suffering from so much more morning sickness this time around. He knows that something is off, he just doesn’t know what. I’m talking about how my body is just doing a lot of work right now, and that we need to take care of our bodies by getting lots of rest, drinking water, eating healthy foods and getting exercise. He’s been super sweet and snugly and reassuring me that I’ll feel better soon.

I’d love to hear your thoughts!

I VERY VIVIDLY remember Googling this exact question and getting advice that basically ran smack dab into your exact dilemma: Don’t tell a young child too soon, wait at least until you’re showing, etc. etc…

…but oh yeah, also tell them as soon as you announce it to other people, because you DEFINITELY don’t want them finding out from anyone else but you.

(Oh look, here it is, still sitting unhelpfully at the top of Google.)

I suppose the compromise is to delay telling anyone else right at 13 weeks. That’s not always feasible for every situation (plus at a minimum you’re super excited to make the super exciting announcement by then), but it’s probably worth considering? How far along were you last time before you started to show? You’ll likely show earlier this time, so if you were visibly pregnant by say, 16-18 weeks, that’s not TOO crazy of a delay in announcing to the world. Plus if anyone gets snippy about not being told ASAP!!!!!OMG!!!! you have a very hard-to-argue-with excuse: You needed to tell your son first, and chose to wait until you were showing or had the 20-week ultrasound or whatever.

I cannot for the life of me remember (or track down via blog post archives) when exactly we told our oldest about my second pregnancy. He was only 2.5 or so, at most, and I do remember that it wasn’t so much of a Single Big Announcement as a long series of smaller conversations about something way too abstract for him to fully understand. We read a lot of books and watched a lot of Special Episodes of cartoons about becoming a big sibling and new babies. He had an ultrasound printout from the 20-week scan on the wall in his room. He heard us talking about it with other people.  He understood that “baby brother” was making my tummy big and that baby brother would come out and live with us. Or at least…he could mimic understanding, but in reality he was far too young to really “get it” until his brother actually WAS born and came home to live with us. (And lord, was he not happy about it, but that’s a whole other topic.)

With baby number three, we told our oldest, Noah (then five), around the four-month mark. That was a VERY different conversation, because he was 1) older, and 2) had been to this particular rodeo before. I was showing a little already, plus we were going to see a lot of family over the next few weeks (holidays and such). Again, we had already announced the pregnancy online and to our families, but there was little-to-no-risk of Noah hearing it from anybody else. I didn’t tell our neighbors or anyone at his school, for example, until I was UNDENIABLY visibly pregnant (although I believe Noah announced the news himself to his teachers and such, which was fine).

(My middle child, Ezra, was barely 2 at this point, and once again with him, it was a long, slow process to understanding. Lots of books and cartoons and letting him “help” with going through baby clothes and “talk” to my stomach, while deep down I knew he was going to remain completely baffled and then get thoroughly blindsided. Luckily, he has always just loved loved loved babies, even as a toddler, so he wasn’t totally mad about it.)

So if there’s any way you can restrict your announcement to people who AREN’T going to blab in front of your son (out-of-town/long-distance relatives, your work, friends you trust to be mindful around him), and avoid telling random neighbors or people at his school or daycare, that can buy you some time until you have something a little more “concrete” to offer him. An ultrasound that actually looks like a baby, a visibly pregnant belly, clothes and furniture in the nursery, etc.  In the meantime, keep going with the vague explanations you’re giving him right now (your wording is perfect, btw).

If that sort of staggered announcement simply isn’t going to work (i.e. your family all lives close by and/or everybody you know is a hopeless blabbermouth), it’s not the end of the world if you tell him sooner rather than later. Just be prepared to not have One Big Conversation about it, but a series of matter-of-fact talks that gradually increase the level of information he needs to process. Encourage him to talk about his feelings and ask questions rather than silently ruminate.

And no matter: Read lots of nice bedtime books about babies and siblings (although never at the expense of a familiar favorite) and see if any of his favorite preschool cartoons or characters have a sibling-specific episode or book. Most do, and most of them are really great. Our favorite go-to was Blue’s Clues where Mr. Salt and Mrs. Pepper give birth to Paprika and need to tell Cinnamon the news and WOWOWOWOW I feel like it’s just hitting me how damn weird that was. So hey, if learning about a new baby via condiments didn’t scar my kids for life, you won’t either, no matter how or when you end up telling him.