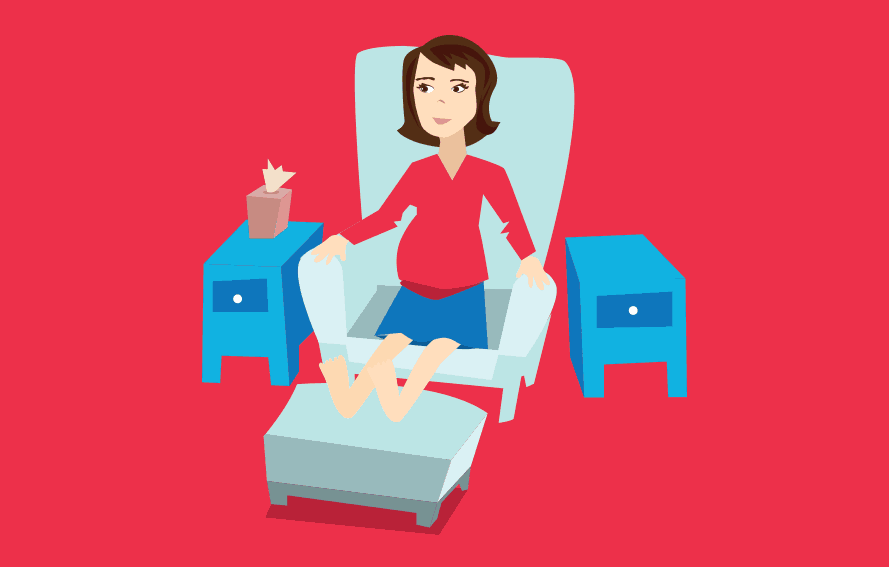 This past week I probably came as close to unabashedly loving pregnancy as I’ll ever get. I am obviously, prominently pregnant but not freakishly so. My skin and hair have calmed down and I finally got my first “you’re glowing!” compliment. (And it only took six months!) I’m not sleeping very well but I’m blissfully free of the terrible back pain and sciatica that plagued me last time. And I have not vomited in dang near a month, nor are my food and smell aversions as powerful and all-consuming as they’ve been for far too long.

I’ve had enough energy to take my son to the playground AND to Target…all in the same day! I’ve gone out for dinner with friends and finally got my butt to the hair salon. I’m loving the more trendy, form-fitting maternity outfits that I’m so happy I treated myself to recently, second-trimester-I’ll-probably-never-wear-this-again be damned. I look pretty good, I feel pretty good…so could I please just quit now while I’m ahead?

This is exactly how a lot of women describe their entire second trimester, and I’m trying not to feel too cheated by the fact that this pregnancy seems to have been one long first trimester (nausea, headaches, peeing, not-ever-looking-as-pregnant-as-I-felt) followed by what will likely be a very short honeymoon period before the messy awkward explosion of the third trimester, the time of the giant belly and grunts and swelling and constant rubs and labor predictions from strangers (last time I couldn’t even go to the grocery store without little Russian grandmothers praying over me against my will, since I looked fully cooked and overdue long before I actually was).

When I started pitching and shaping the ideas for this column, I thought it would be pretty fun to keep running comparisons between my pregnancies, but I don’t think I was really prepared for HOW VERY VERY DIFFERENT they would be. Sure, I knew better than to ever assume that any two pregnancies would be the same (I learned that lesson early on with my first pregnancy when I tried OTHER PEOPLE’S sure-fire morning sickness remedies with disastrous results), but I guess I still thought that MY pregnancies would at least vaguely resemble each other.

My first pregnancy: 13 weeks or so of unrelenting, incurable all-day sickness. 10 pounds lost followed by textbook pound-a-week weight gain for a total of about 33 pounds. Due date predicted practically down to the hour. Craved chocolate pudding, hot salsa and Indian food. Hair mysteriously stopped shedding for entire duration of pregnancy. Was complete nervous wreck; husband still gets nightmares about “the whole nesting thing.”

This time: Five solid months of morning sickness, mostly controllable by constant eating and snacking, provided I could figure out the one acceptable food that wouldn’t just make it worse. No weight loss, but also no real weight gain to speak of either — six or seven pounds, tops. Migraines. Conflicting ultrasounds and no memory of The Momentous Evening (or morning! afternoon delight! it’s anyone’s guess!) means no real set-in-stone due date.

Stubbornly breech baby kicking an entirely different set of organs. Craved black olives, caffeine and cheese. Absolutely disgusted by most meats, especially chicken and fish, but usually could always eat a hot dog or four. Hair is still shedding. Anxiety has mostly been minimal, save for some recurring weird-ass dreams; way more concerned about husband rearranging the dining room furniture than assembling the crib.

(I am assuming you know to buy a crib and some type of surface upon which to change diapers. Doesn’t necessarily have to be an actual “changing table” or anything, but something flat and at a comfortable height for changing. Sure, sure, some people love to brag about how they just changed their baby’s diapers on the floor or couch or bed and never needed a separate table, but I secretly think they’re either forgetting or willfully withholding the stories about back strain and projectile poop on the furniture and their pillow and how it’s really hard to keep the dog from eating the poopy diaper if you’ve got nowhere to chuck it except the floor.)

Don’t forget to visit Amalah’s Pregnancy Calendar from Weeks 22, 23, 24, and 25 when she first starts the Baby Registry Discussion.

If you’re considering an online baby registry, we recommend our affiliate Amazon’s Baby Registry, which offers free 90-day returns on baby store purchases.  You can even add items from other websites onto to your baby registry.

If there is a question you would like answered on the Advice Smackdown, please submit it to amya[email protected].