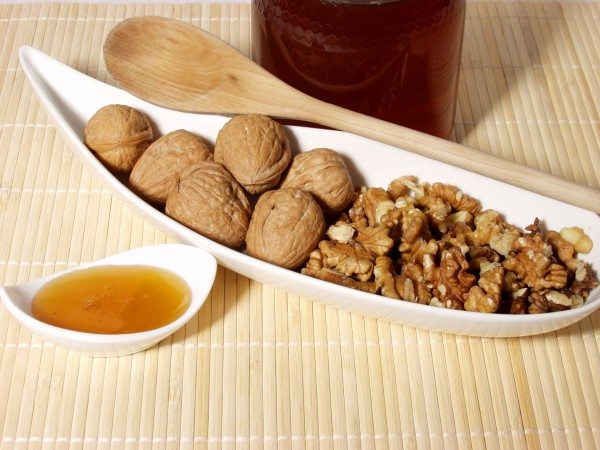 I am a new-comer to your writing and I absolutely love it. Basically everything I know about pregnancy and parenting has come from here…I know, kind of pathetic…I am not currently pregnant and my husband and I are the only ones in his family that do not yet have kids. This year was the year to be with his family for the holidays and so all of my sisters-in-law – who have had children or will very soon – got to talking about some baby stuff and they couldn’t agree on anything really…what else is new?

One topic got pretty heated and I couldn’t find much online by way of any “credible” sources on it…so I’m asking you 🙂 They could not agree on when you should give a child honey, peanut butter, and nuts in general. One said that is wasn’t until 2 years, another said 1 year, one even went as far as to say pregnant women shouldn’t eat nuts or peanut butter because it will affect the baby. I love nuts!! Pregnancy will be miserable without peanut butter! So…how much is true, what is not? Knowing before I get pregnant would be good because I don’t want to mess up the kid because of silly snacking habits and what not…

Well, nuts are certainly becoming quite the hot topic around here, no? I promise this isn’t the beginning of a trend, mostly because after this question I’m pretty sure I’ll have completely used up every bit of my limited knowledge about nuts and nut allergies.

First of all: honey. Honey should never be given to a child under the age of one. It’s NOT an allergen, however. Honey can sometimes contain spores of a bacteria (clostridium botulinum). This bacteria is generally harmless to anyone over the age of 12 months because our digestive tract is mature and producing its own healthy microorganisms that can kill the bacteria. Under one year of age, however, a baby’s digestive tract is NOT mature enough, so those trace spores can develop into…botulism. Yum. Everything I have ever read tends to agree that 12 months is long enough to wait for honey — unless of course, you know your child has an underdeveloped digestive tract or compromised immune system for some reason. Prematurity, illness, something like that. If this is the case, your doctor will generally tell you when it’s okay to introduce honey. Otherwise, 12 months is the accepted standard for healthy, typically-developing children.

And now, NUTS. The reason you witnessed such vociferous disagreement about nut allergies is because…well, it’s one of those things that even the so-called “experts” aren’t entirely sure about, and there’s a LOT of conflicting information out there aimed at pregnant women and parents of infants. No one can adequately explain WHY there’s been a sudden rise in serious, life-threatening nut allergies in children, and that’s scary. (The best explanation I’ve read so far, by the way, was in The Unhealthy Truth, which posed the suggestion of genetic engineering mucking with the purity of our food supply and the reliability of food labeling, i.e. soy being cross-bred with cashews, thus a tree-nut allergic person could have a reaction after eating soy and not know why, or newborns getting accidentally exposed to nuts via genetically-modified formula. But again, this is just one of the many, many hypotheses floating around. The real unhealthy truth is we just don’t know.)

So quite often, parents go looking for ADVICE and end up getting what amounts to little more than reactionary scare tactics, or “experts” making guesses. There seems to be evidence that delaying a child’s exposure to peanuts and other tree nuts for at least a year might reduce their risk of developing a severe allergy…or it at least reduces the chance of them having a REALLY serious reaction, as even children who ARE allergic sometimes have milder reactions as they get older. But I’ve also read plenty of arguments AGAINST delaying nuts and nut products at all, claiming that early exposure to allergens can help build natural immunities and protections and blah blah blah. (Think the statistics that show that children who grow up with family pets tend to, on average, have fewer allergies to pet hair and dander later in life. Same theory, but while sneezing at the cat is one thing, anaphylactic shock over peanut-butter crackers is another. You won’t meet a lot of parents willing to sign their baby up for that particular focus group, you know?)

Basically, your family members are all just repeating what they have personally been told about nuts, and all of them were probably told that by people with the very best intentions who believed it to be true. (Or maybe they just read something scary on the Internet.) Most pediatricians advise waiting until at least your baby’s first birthday. Others say to wait longer, especially if you have a family history of food allergies. This was always what I was told — we are fortunate enough to have almost zero food allergies of any kind in our immediate family. (I was mildly allergic to tomatoes and strawberries as a kid and would get hives, but I outgrew them both by mid-elementary school.) Thus, our pediatrician told me to go ahead and try peanut butter after each of my boys’ 12-month check-ups. Which we did. Zero allergies. Noah practically LIVES on the stuff now. I spent a lot of time during Ezra’s first year fearing that Noah would smear peanut butter kisses on him or something, but Ezra, too, is just fine with nuts. Our pediatrician also told me to go ahead and switch to from formula to whole milk around 10 months, even though many experts say you should delay all dairy for a full year as well. Ezra started on scrambled eggs (yolks AND whites) around 10 months old, another allergen no-no. Yet eggs remain pretty much his favorite meal on earth to this day. Scrambled, cheese omelets, frittatas full of veggies and meats, huzzah for eggs.

Basically, welcome to parenthood: You get to listen to what This Expert says, which runs counter to what That Expert says, and then there’s This Doctor and then the Nurse Practitioner Who You Saw That One Time For An Ear Infection Who Said Something Completely Different…and eventually you learn to take ALL OF IT with a grain of salt and trust your own instincts about whose advice you’ll take in the end.

And the same goes for pregnancy. Extending the allergen exposure to pregnancy is a newer theory, and one that I personally have not read anything super-convincing about. Several peer-reviewed studies have found no link between peanut consumption during pregnancy and peanut allergies in the child, but again, because we just DON’T KNOW enough about the new strain of allergies, women with family histories of food allergies (or women who already have a child with a nut allergy) are sometimes advised to avoid peanut proteins during the third trimester and while breastfeeding. Personally, I did not do this, during pregnancy or nursing. I ate (and continue to eat) peanut butter and trail mixes with relish and delight. Obviously, I hope my third child will also escape having a food allergy. If s/he does develop one, well, I really won’t be able to say that my occasional habit of smearing peanut butter on matzo during pregnancy had anything to do with it, because I did the same thing with the other two.

(Note: I only eat and serve my children natural, organic peanut butter — none of the supermarket crap with a ton of sugar, GMOs, hydrogenated oils or mystery preservatives. Our peanut butter contains: Peanuts. Maybe some sea salt. The end. While I’m not saying this AT ALL makes a difference in the fact that Noah and Ezra aren’t allergic, I simply feel better knowing that if they did ever have a reaction to it, it would be easy to swiftly nail down the actual culprit instead of running down a long list of Frankenfood-type possibilities.)

Basically, find a doctor — an OB and a pediatrician — that you trust. Someone to help keep up with the latest research and recommendations for you. If that doctor says something drastically different than what your sister-in-law is preaching at Thanksgiving dinner, ask him or her about it. Do your own research, if you can do that without driving yourself insane. There are facts, theories, opinions and a bajillion shades of gray in between.

We’re lucky. Other families used the same exact allergen-introducing timeline and ended up with an allergy, despite no prior family history. Other families waited longer, and again, the results do not indicate any sort of guarantee. Some kids develop allergies, and others do not. We just don’t know why yet. We just keep doing the best we can with the barrage of conflicting information we have at the time.