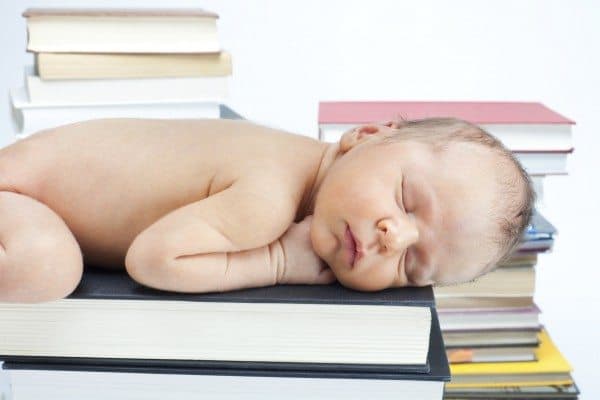 Love your column, kids, etc – and congrats on the newest addition!

So, yesterday two sticks revealed a plus sign. After only a few months of trying, it looks like we’re pregnant and maybe six weeks in? Maybe five? If at all? Doctor’s appointment forthcoming.

I alternate between excited and well, damn terrified. OMG I have to get through pregnancy, labor and finally there is going to be a BABY. For the rest of my life. Yay! But a little bit WTF as well. It will be okay, right?

So, my question is about pregnancy resources, specifically books. That I can read in bed (lying on my back? Not lying on my back? Gah!) I went to look up the standby “What to Expect When You’re Expecting” but then read some reviews that said it contained a lot of fearful information and wasn’t that helpful. But then I went to look up pregnancy books and…. mind overload. There are so many! Are they all the same? Are some terrible? Some amazing? Am I jumping the gun too early? Should I go to the doctor first and not jinx it by getting a book? (Will of course go to the doctor asap.) I’ve been reading the zero to forty column, but would love a handy reference or two I can keep by the side of the bed. And maybe one for hubby too? Any suggestions from you and your readers would be appreciated.

I’m hesitant to approach this question as anything other than a straight-up crowdsourcing exercise, because the last time I read a pregnancy book — like really, really read one for my own enrichment and education — was during my first pregnancy, over five years ago. And I’m guessing that’s not THAT uncommon, but still: over five years ago. New pregnancy books hit the market every five minutes, and older versions release new-and-improved editions constantly, so the book I read back then might not really resemble the current edition on the shelf today.

I did, however, page through a LOT of pregnancy books while writing Zero to Forty. A LOT. Several giant boxes worth. Basically imagine typing “pregnancy book” into Amazon and then having almost everything in the search results show up at your house. That’s what my office looked like, for awhile. Some of them were pretty good. Some of them were annoying. Or incomplete, or overly-clinical, or gimmicky, or alarmist, or just plain dumb. But I imagine there’s a devoted audience for most of these titles, because everybody wants something different from their pregnancy guide.

PERSONALLY, I liked anything written in the handy week-by-week format, and not just while researching for my own week-by-week pregnancy calendar. Sticking to a single chapter each week saved me from that crazy overwhelmed feeling you get after reading some other books cover-to-cover and are left with a terrible sense of JUST HOW MANY THINGS CAN GO WRONG and JUST HOW MANY THINGS YOU NEED TO REMEMBER. What to Expect When You’re Expecting is usually held up as the prime example of this, and indeed, the copy I bought back in 2004 (when I thought I was pregnant but wasn’t, so…yeah, wait until you see a doctor, okay?) scared the crap out of me. A symptom could be completely normal…except in one case out of every several thousand where it totally wasn’t! That book — along with many others — tended to rule a little too closely on the side of ABSOLUTE CAUTION, with dangers of foods/ingredients being drastically overstated. (While other books laid out a more balanced view, but then still ended with “but check with your doctor” cover-your-ass backtracking.)

I have heard, however, that the newer editions of WTEWYE have dialed back on many of the things women complained about. In the interest of being “thorough and comprehensive,” the book had unintentionally evolved, edition by later edition, into an encyclopedia of rare worst-case scenarios and ridiculous diet expectations that drowned out the fact that it really did contain a TON of good, useful information. I have not personally read the later updates, but I know that the publishers and authors really did make a solid effort to bring the book back to what it was originally intended to be. (Amazon reviewers might be referencing older versions, they might not. Anybody read this book recently and care to give an opinion?)

My two personal favorites during my own pregnancy were Your Pregnancy Week by Week and the Mayo Clinic Guide to a Healthy Pregnancy. I found them both to be close to my ideal nightstand book — easy to read and quick to get to the point. If neither of these books covered a topic, chances are 1) it really wasn’t that important, and 2) I could find it on the Internet anyway.

Speaking of the Internet — during Zero to Forty I probably referenced BabyCenter’s pregnancy guide more than any other title, but have a hard time recommending that anyone go out and buy that behemoth book, because it’s all available for free at the website. Seriously. All of it. The most useful chapters are the week-by-week guide (which you can sign up for in email newsletter form) and the “Is It Safe?” sections — which are also available online, where they are kept up-to-date and probably even more comprehensive.

I tried to get my husband to read a bunch of the father-to-be titles, but in the end he preferred The Mayo Clinic Guide as well, and occasionally I just read aloud to him from that week’s chapter to keep him informed of the baby’s development. It’s just how his brain is wired. He likes instruction manuals and checklists, not novels. He protested that he didn’t NEED a book to teach him how to not be an insensitive jackass, he needed 1) me to talk to him about how I was feeling, and 2) a couple chapters on labor and childbirth. Then he too, preferred to supplement his knowledge with the Internet, where he Googled “husband labor coaching” and packed his own little bag for the hospital, including a tennis ball to rub my back with. Your Husband May Vary, but just…don’t go all Katherine Heigl on him if he isn’t all that interested in The Expectant Father or something.

As for all the “down-to-earth” and “funny” titles out there, well. They’re fun, I guess. I read The Girlfriends’ Guide to Pregnancy after everybody I know raved about it, but found it pretty outdated compared to the hilarious pregnancy blogs I was following at the time. (Her advice for maternity clothes involved borrowing your husband’s button-down shirts and wearing them with stirrup pants. STIRRUP PANTS!) Pregnancy Sucks is another popular one that I thought was just all right (admittedly I had issues with it stemming with how much I’d struggled to get pregnant in the first place), and Jenny McCarthy’s terribly misinformed anti-vaccination crusade means her Belly Laughs book is more than dead to me.

So before the comment section floods in with a zillion contradicting recommendations and this whole thing becomes about as useful as Amazon: AFTER you see the doctor, buy one general reference book by a reputable medical establishment (Mayo Clinic, Children’s Hospital, etc.), then one more “condensed” week-by-week book that seems to jibe with your general view of pregnancy (a focus on diet or on being “natural”? the opposite of that? something with a good fat index of symptoms? lots of pictures?) or just sign up for a weekly newsletter online. Add any other titles that look interesting, like cookbooks or exercise routines or humorous titles, to an online wish list until you can get to a bookstore to look at them in person to see if they’re worth the money. (And of course, keep reading Zero to Forty!) (Oh, and if you know of a maternity/kids’ clothing consignment store in your area? They often have a small selection of used pregnancy guides for sale, and usually always have the “big” popular titles.)

The fact is, while yes, there are 4,500 different pregnancy books out there, they are mostly ALL PRETTY MUCH THE SAME INFORMATION, just laid out and presented in 4,500 different ways.