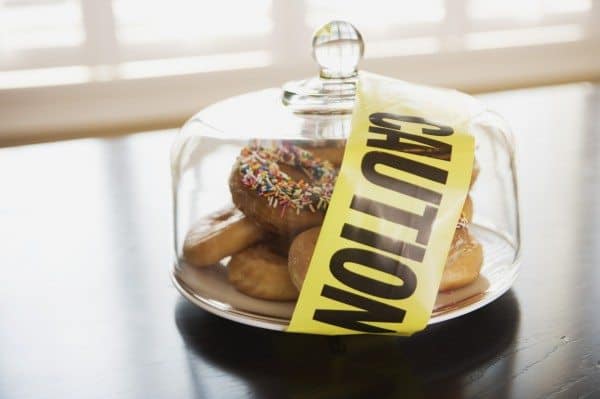 Oh, wise Amy. I am in need of some guidance.

I have a wonderful, adorable and very cute (I’m not biased!) fifteen month old son. He is our first child, and the light of our life. When he was about 12 months old, I was eating a peanut butter sandwich and I kissed him and BAM! Within a few minutes he was swollen up and we were rushing to the emergency room. After we had some allergy testing done, we discovered our son is highly allergic to all nuts (peanuts & tree nuts). We now carry multiple epi-pens (car, diaper bag, house) and always have Benadryl close by. In addition, in the past three months, we have changed our household diets considerably.

My parents have gone above and beyond to be cautious when our son is around them. They make sure they are not serving anything with nuts and they make sure their peanut butter is up high on a shelf in the pantry.

My mother-in-law is… not. She has not changed anything that she makes when we come visit (both parents live within a ten minute drive) and Christmas was kind of the straw that broke the proverbial camel’s back. First, she asked that I make a dessert that has nuts. I told her we went completely nut-free in our kitchen and she was snotty about it. I offered to give her the recipe but she refused. Then, when we showed up, every single cookie, cake, pie, etc. had nuts in it. It was like she was going ABOVE AND BEYOND to include nuts. Chocolate chip cookie dough balls? DELICIOUS. WITH OR WITHOUT NUTS.

Our son is, thankfully, too young to eat most of the desserts and I didn’t have to make him feel bad for something he couldn’t control… this year. But what about next? Then, during our present-exchange she gave us… a nut chopper (along with some other truly great presents). She said it would, “change our life” and my husband made a smart-ass comment about yes, it would change our life because OUR KID WOULD DIE. She told us we were “overreacting.” Everyone dropped it, but huh?! We have to carry an epi-pen. We have to read everything that comes near our kid’s mouth and skin and she says we are overreacting?

The push-me-over-the-edge moment came yesterday when she sent my husband home after he dropped something off, with some recipes that we would love! Every recipe contained peanuts. Every. Single. One.

Obviously, we have to address this. I’m home with our son, but she’s retired and enjoys having him around and I enjoy the break, but I can’t trust her now. I mean, this is a Major Life Deal that we have been thrown with the allergy department, and she’s brushing it off and GIVING US A NUT CHOPPER (holy crap). At least we have our White Elephant gift for my family’s Christmas next year, but still! A NUT CHOPPER FOR A NUT-ALLERGIC CHILD! How do we address this? Directly? A sit-down event? A list of things he can and cannot have on her fridge when he visits? HALP!!!

NUTS!!!! (just in case I didn’t say it enough, and really, who doesn’t laugh when they say nuts?)
J

I have read accounts of some PRETTY EGREGIOUS behavior from parents and in-laws and relatives and…well, HUMAN BEINGS IN GENERAL over the years here, but I am pretty sure your mother-in-law has gotta rank pretty high up in the Top 10 List of Behavior So Jaw-Droppingly Bad I Want To Smack Her Sideways From Here.

Either your mother-in-law 1) is completely senile and needs her memory/brain functions checked ASAP or 2) has read some magazine article or saw some TV segment about nut allergies that skewed in the direction “over-diagnosed! totally fake epidemic! fueled by crazy helicopter parents determined to make their children seem speshul and deny other children their God-given right to eat peanut-butter sandwiches at school!” Sadly, this argument does exist, actual real-life allergy-test results and violent reactions be damned, and your mother-in-law will probably not be the last person you encounter who will make you fight for your son’s safety.

But fight you MUST, obviously, be it with her or some clueless parent or school administrator who decides to bitch and moan in response to the letter you send home at the beginning of the school year detailing the severity of your child’s allergy (if he’s not fortunate enough to outgrow it, which CAN happen, and is of course what we’ll hope will happen for him). In the meantime, though, you and your husband have to find a way to tell your mother-in-law how absolutely non-negotiable respect for this LIFE-THREATENING ALLERGY is. I honestly don’t care HOW you do it, via a loving intervention or a public shaming in the town square. Just as long as it WORKS.

Obviously, changing her mind would be great. Offer her a fact-sheet on nut allergies and anaphylactic shock from the Internet or your pediatrician, perhaps, though from the Christmas spread and gift, it does kind of sound like she’s entrenched in her opinion that you guys are overreacting, so that might not actually do anything. A live demonstration of how to use an epi-pen might drive the message home that this is serious business. (And is an essential skill ANYONE who might serve as your son’s caregiver needs to know, though I agree that I certainly wouldn’t let her babysit, given her refusal to take even the most basic of precautions.)

So if we assume that she basically thinks nut allergies are bullcrap or aren’t as serious as your son’s allergy ACTUALLY IS and isn’t going to let go of that opinion easily, what should you and your husband do? Well, I’d drop ANY concerns about offending her or hurting her feelings REAL QUICK, that’s for sure. You’ve explained, you’ve reminded, it’s time for some set-in-stone rules, ultimatums and…yes, consequences.

No more jokes or smart-ass remarks from your husband. No more gentle reminders or simple eye-rolls when she hands you a stack of peanut-heavy recipes. The next time she says something about you guys “overreacting” do NOT let it drop for the sake of making the rest of the room “uncomfortable.” Call her on it. Argue back. “No, Mom, we’re NOT overreacting. We’re just trying to deal with our kid’s unique set of needs the best we can.”

She’s making YOU GUYS uncomfortable first — thus giving you a pass to put down the Miss Manners and tell it like it is — and even worse, she’s putting her grandson in jeopardy, or at best dooming him to feeling left out and scared at future family gatherings, while making you and your husband nervous and panicky while attempting to watch him like a hawk around the buffet table and candy dishes. You aren’t going to ruin Christmas by insisting the chocolate chip cookies get made without nuts next year. You know what would ruin Christmas? Calling 911 because no one noticed the two-year-old eating a chocolate-chip walnut cookie while the adults had their backs turned for two whole minutes.

Since it’s his mother we’re talking about, your husband needs to step up the forcefulness here. His job. Call her and say, “It looks like we need to talk about next Christmas already, because what happened this year? With the nut-happy everything? Can’t happen again. I need to know that you take this seriously, because it’s scary and hurtful for us to have you think otherwise and refuse to take any precautions or make any changes.” Have him ask her what information you guys can provide for her that may help her understand that this allergy is indeed life-threatening and life-changing for you guys. Have him explain exactly what kinds of changes need to be made and ask her point-blank if she’s willing to make them. You’re not asking for her to live nut-free, but COME ON.

And again, no joking or sugar-coating: He absolutely needs to impress upon her that X, Y and Z are non-negotiable for you guys feeling that you can TRUST her to make her home safe for her grandson. “And Mom, if we show up to another massive spread of toddler-enticing nut-filled desserts, we will leave. Full stop. We don’t want it to ever come to that, but seriously. We’re begging you, here, to help us keep him safe. AND from feeling left out and deprived every year because Grandma wants to prove some kind of point via peanut-butter fudge.”

Basically, I guess I’m giving you permission (for whatever MY “permission” is worth) to stop being polite and start getting real with this woman. Be as forceful and ultimatum-heavy as you want to be. Obviously, people make mistakes and do bone-headed things — especially over small details they’re used to taking for granted — but your mother-in-law was reminded REPEATEDLY of the nut concerns over the holidays and yet went overboard in the opposite direction regardless. There’s just…no excuse for that, other than willful ignorance or straight-up passive-aggressiveness.

(Confession: I once let my husband buy a tray of cookies to take to a friend’s party. I forgot to remind him that their child had nut allergies, then neglected to even look at the offering until I handed it over…and saw that the majority of the cookies were OPENLY covered in nuts. It was an innocent, absentminded mistake, but oh, I was sooooo embarrassed. And it will NEVER happen again, because I am a grown-up who doesn’t need to be told five bajillion million times before I get it through my skull.)

She has a full year now, to earn back your trust before next Christmas. A full year to move the peanut butter to a higher shelf and agree to check ingredients before handing your son a snack, or to only serve him stuff you prepare at your home, at least at first. A full year to grow the hell up and realize that AT LEAST making a nut-free version of each dessert is not the end of the world. If she seems to improve (even with still needing the occasional reminder) great. If not? You spend next Christmas with the grandparents who give a damn about your kid’s health, the end.