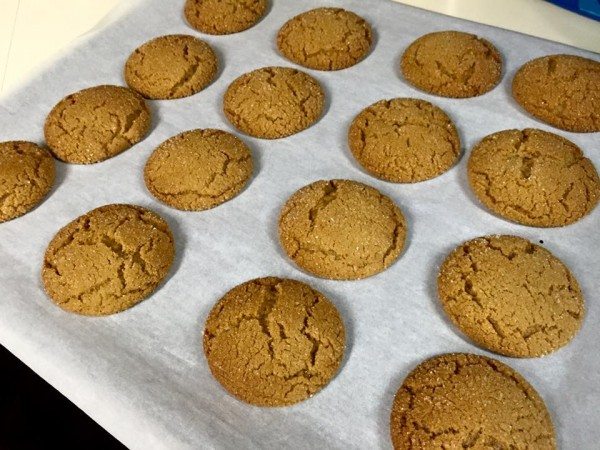 Baking is my thing. I’m not saying I’m any better at it than anyone else, just that it makes me happy on multiple levels. Anyone who doesn’t like baking is missing the fact that it’s one part chemistry and two parts magic. There are very few areas of my life in which actions A, B, and C executed in the proper order will always result in outcome D. People are variable. Life is unpredictable. But cookies? Cookies not only reward you for following the directions by making the whole house smell good, the end result is delicious and has a way of making you popular.

I spent the entire last week of school before winter break baking like it was my job. Between my two high schoolers, there were 15 teachers and staff at the high school to whom I wanted to say thanks via a bucket of homemade cookies. And I know that some teachers feel that homemade edibles are a terrible idea and advise against them for various reasons, but if any of our recipients over the years have been disappointed, they haven’t shown it. (It helps that not a lot of kids do teacher gifts at the high school level, for one, and also that I’m a decent baker and I always make an assortment so that there’s kind of something for everyone.) So I spent a week baking. And then I baked a little more. By yesterday, all teachers had received their cookies, some friends had gotten plates of cookies, there were cookies in the freezer ready to journey to family later this week, and I’d given in to my children’s complaints and put a container of cookies in the fridge for them, too, so that not all the cookies were for others.

The crown jewel of my holiday baking ritual is an old-fashioned molasses cookie.

Over a decade ago, having formed a cross-country bond via email and instant messenger with another divorced mom just trying to find her way, a box of these cookies arrived on my doorstep before Christmas. The sender, Kira (who has since cemented her place in my life as BFF), explained that it was her grandmother’s recipe and a favorite at her house, but my children—immediately declaring them the best cookies they’d ever eaten—dubbed them Kira cookies, and the label has stuck, here. It’s not Christmas until I’ve made a double-batch of Kira cookies, the kids have pranced in and out of the kitchen snatching them from the cooling racks as I holler in exasperation that those cookies are for your teachers!, and I make another double-batch, and then, okay, once all the cookies have gone out the door, I relent and make yet a third double-batch (Update: here’s the recipe to those famous molasses cookies).

I cannot explain the magic of these particular cookies to you except to say that Kira came into my life during a pivotal time and has stood by my side (albeit from several thousand miles away) through changes I never foresaw, challenges I never knew I was strong enough to meet, and losses and victories that have taken my breath away. Also? It’s a damn good cookie, crispy and chewy and spicy and sweet. There is no better cookie on the planet. Just the smell of them filling the kitchen is an automatic trigger for nostalgia and happiness and gratitude and hope, for me. The teachers seem to like them, too—I get more comments and compliments on those than any other.

This is perhaps the first year in… ever… or certainly in recent history, anyway, when that week leading up to winter break was… untroubled. Calm. I began my tradition of teacher gifts back when my oldest went to preschool, much as everyone else did, because it was “the right thing to do.” It’s in the societal contract, you know. You give a little something to your kids’ teachers. But very quickly, teacher gifts became an opportunity to show true appreciation rather than just doing what was expected. My children were very young when I got divorced. There were a lot of fraught years where those teachers were a huge part of keeping my kids’ lives stable, and all I could afford was a round of baking supplies. Then my youngest entered a rough time before, during, and after he was diagnosed with autism. And my oldest dealt with more than her share of struggles through the end of middle school and the first few years of high school. It felt like there was always something, and always a reason to step into the kitchen and spend some time finding a way to say “thanks for helping us through” to the other adults in my children’s lives. But this year was different.

By the time the semester wrapped up last week, my oldest had been accepted to every college to which she’d applied. A representative from her top choice came and surprised her at school with the presentation of a Dean’s Merit scholarship, and we were in on the plan so we got to be there to see her face. My youngest expanded his sphere of comfort significantly this year, so in addition to the academic mastery which has always come easily to him, he also left this term with several new activities under his belt as well as having passed through several hoops that have him in the running for a prestigious summer program (which he never would’ve even considered a few years ago, much less had the poise and determination to make himself a viable candidate). These things are great achievements, obviously, but most important: My kids are good. They’re just so good right now. Not perfect, not infallible, not without challenges, and certainly not exempt from bickering with each other until I want to strangle them both, but still. They’re happy. Comfortable in their own skin. I can’t even type that without getting teary because it’s huge, for both of them. They are coming into themselves and it’s amazing.

This year’s cookies were a thank-you, as always, but also—for several teachers who’ve been with them for years—a victory dance. “Thank you for being part of our village. Look at them go. Did you ever imagine?” It may sound hard to bake all of that into a cookie, but I feel like the Kira cookies can handle it.

So I baked, and baked, and baked. For so many years, that baking was a tiny little eye in a raging storm, and when I finished, I had to step back out into the fray. Last night my daughter’s hand hovered over the cooling racks, her eyes flickering to mine, a grin playing at the corners of her mouth, daring me to tell her those cookies were for other people and she couldn’t have one.

“Go ahead,” I said. I was thinking of next year, how she’ll be gone and then she’ll come home just in time for the baking—dirty laundry in tow—and the kitchen will smell of spices and sugar and molasses and she’ll tell me all about her new world (I hope) and stick her fingers in the batter while I shoo her away and I won’t know her friends or her teachers or her grades anymore, but we’ll still have Kira cookies. I didn’t say any of that, though. I just watched her eat her cookie.