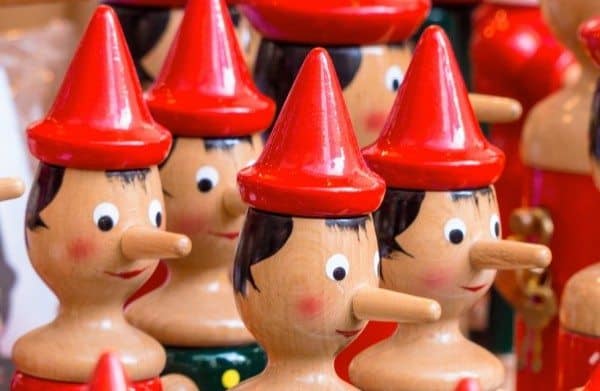 I saw your post on the adorable secret life of Ike and I thought you might be able to weigh in on some behavior from my 5 year old.

So obviously she’s a little older than Ike and she has an active imagination. She’s always loved making up stories and I think she’s had some reactions from grandparents that have egged her on – both positive (Yay grandma believed friend ruined my picture and bought me an ice cream) and negative (Grandma says telling fibs is bad and against the rules).

I understand she’s experimenting with the reactions she can get and understanding that the truth can be stretched, like in when we don’t tell someone that we don’t like the present they got us.

When she does it with me it’s usually about a friend who has done her some kind of wrong like saying she can’t come over anymore if she doesn’t play the game they picked. She’s also asked our nanny if they could have a secret and she could get permission to watch TV(which is not allowed on weekdays), since I’m not home to enforce. Of course she was reminded that we have no secrets only happy surprises in our family and I did not shame her about these attempts to get sympathy or attention or treats.

But what do I do in the longer run? I don’t want her to get into the habit of lying and these are not large cover ups they are just lies about irrelevant things mostly told to her Grandmother. I’ve talked to her about why honesty and trust is important. She doesn’t have severe consequences like yelling or time outs to make her want to try to hide things from us. Her consequences are taking toys or screen time away. She gets plenty of treats “just because” so she’s not deprived. She also gets time with me at the end of the day to relax and catch up about the day and often these stories come out at this time.

Having grown up the eldest in kind of a neglectful home I would categorize myself as an empathetic mother (also working mom guilt gah!) and I suspect I am not enforcing boundaries well enough and have been working on that with clearer rules lately. I suspect she is above average intelligence and reads above kindergarten level and is a natural leader in her peer group.

We emphasize values over smarts in our family and say so often but is this normal or am I raising a little sociopath? Please help!

Between the ages of 3 to 5, a child’s imagination really starts to take off. And that’s great! A vibrant and rich imagination is a wonderful thing, and something to be encouraged! But it’s difficult for us as parents sometimes to understand that with great imagination also comes…a great steaming load of preschooler lies, fibs and tall tales. And it’s easy for us to jump to the negative labels — our child is being dishonest, deceptive, sneaky, a total future sociopath, etc.

But in fact, our child is not being any of those things. Even a very smart, super-advanced-in-all-ways 5 year old is still borderline too young to understand what a “lie” even is. She’s working out the distinction between fantasy and reality, and her little tall tales to Grandma are just that. Grandma probably reads and tells her a lot of stories! Where made-up things happen and people do bad things and learn lessons or maybe they don’t! She doesn’t see any distinction between a made-up story in a book or TV show and the stories she’s telling. Again, seriously, this is perfectly typical behavior for her age.

And I do mean “typical.” I had one child who never, ever fibbed or lied or bent the truth in anyway until he was 6 and a half. And that was my non-neurotypical ASD kid, who figured out he could fake his school star chart with a crayon on the bus and thus earn his reward at home every day. My other two? Almost 100% exactly how you describe your daughter: a colorful mix of tattle-tale stories about preschool villains and bullies, an adamantly steadfast refusal to own up to even the mildest of wrongdoing, and an emerging understanding that stretching and playing with the truth can have its benefits.

That’s not to say that behavior didn’t completely throw me for a loop when my second child came along and began spouting like, 75% fiction from the ages of 3 to 5. And my current 4 year old is driving me crazy with his current habit of “I see something I want that I know Mom/Dad/my brothers won’t give me if I ask, so Imma just take it and hide it under my bed and then deny that I took it, I have no idea, Mom, have you checked my bed for portals or wormholes of some kind? Cuz I have no idea how that tablet/candy/toy that isn’t mine/entire bag’s worth of cotton balls (????) got under there.”

So what are you supposed to DO when your child plays with the truth? Number one, recognize that it’s really a reality vs. fantasy issue, rather than truth vs. lie. This round-up on WebMD has a really nice range of potential responses and how to reframe the discussion from “WHY YOU LYING” to something positive.  (I know, I know, an article on WebMD that doesn’t once suggest it’s probably cancer!) A lot of it is similar to the “no secrets just happy surprises” language you used, which incidentally I totally plan to steal that from you, so thanks!

When your daughter tells a story about someone at school that seems obviously fake, like a bully who hits them and tears pictures and yet never gets in trouble and/or expelled for setting the school on fire, respond with something like, “Wow, that’s quite a story! What should you do if something like that were to really happen?” Imagine she’s writing the first half of a children’s book — The Bully At School Who Tore My Picture! — and encourage her to write the second half. (The bully got in trouble, the bully said sorry, the bully got put on a rocket ship and blasted into space, etc.) This lets her flex that creativity while subtly acknowledging that you know she’s telling a story.

Just like she probably uses imaginative/pretend play with her toys to work through “other things” (social issues between peers, her fears and worries, etc.), these little stories she tells serve a similar purpose for her. They might not be 100% true, but there is still a level of “truth” to them, if that makes sense.

When your child does something “wrong” like coloring on the walls, or something “typical little” like spilling milk and fleeing the scene, try to avoid setting them up for a reflexive denial — “WHO SPILLED THIS MILK?” is just going to result in “NOT ME!” every time and we all know it, and oh, those words do a number on our blood pressure. So skip even asking, and instead focus on what they should do about it in the future. At this age, having them help you clean up the mess is much more important than getting them to admit that they made the mess in the first place.

With my 4 year old and his under-the-bed contraband habit, we’ve been focusing on the “don’t take things from other people’s rooms without permission” angle, rather than making it about him being sneaky/deceitful/dishonest. That’s the rule he’s breaking and that’s the behavior I want to correct — the fact that I can catch him red-handed and he still maintains innocence is more just par for the 4-year-old course. Some of the denial-type lies are a wish fulfillment type thing  — he took his brother’s best Bionicle but now he’s been caught and his brother is mad at him. So he’ll just keep saying he didn’t take it, because that’s the reality he WISHES was true in that moment. Magical thinking, preschooler style.

As she gets older, your daughter will better be able to extend what she knows about right vs. wrong to the whole fantasy vs. reality thing, and the seemingly endless stream of half-truths, white lies and tall tales will slow down. You can read books like The Boy Who Cried Wolf or The Berenstain Bears and The Truth to better illustrate the concept/virtue of honesty.

For now, keep it positive. Recognize that her little stories are more about her imagination and creativity, rather than deliberate deceit and manipulation.