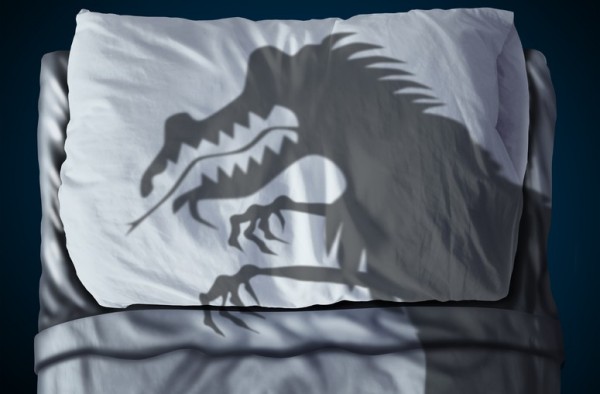 When Your Child Won’t Sleep in His Own Bed

I’ve got a completely and totally stubborn, insomniac 5-year-old boy who absolutely refuses to sleep in his bed. No matter how early, or how routine his bedtime schedule, he quietly waits for my husband and I to fall asleep before escaping his room to crawl into bed with us. This wouldn’t be so bad, except that he will stay up as late as this requires, which means sometimes after midnight. This leaves a very cranky boy in the morning and I’m worried about the consistent lack of sleep. When asked why he won’t stay in his bed, he claims he is scared and matter-of-factly declares that he needs to sleep with another person in the room or he won’t sleep at all. Sometimes he will sneak into his older sibling’s room down the hall. I would have no problem with this, except that they always play games/bicker/whisper/giggle/fight until late into the night (seriously, they’ve been up past 1am before), leaving them both exhausted.

We tried giving up and just allowing him to start the night sleeping in our bed just so he would just fall asleep at a normal time. I figured if it was inevitable, I should just give in for now so he could get some decent sleep. The problem here is that older sibling gets incredibly jealous and claims to be scared to sleep on the second floor all by his lonesome. Suddenly, older sibling becomes the escape artist constantly trying to get crawl into our bed, which cannot comfortably hold the 4 of us – particularly when our German Shepherd tries to join the party.

Added to all of this, of course, is the fact that husband and I are totally and completely wiped out at the end of a long day, and don’t have the mental faculties to deal with this.

In the past we tried positive rewards to keep him in bed. Those efforts started okay once upon a time, but 5-year-old has wised up to the fact that the positive rewards don’t last (because, you know how it goes, after a few weeks, everyone stops remembering to put the stickers on the chart or to take the kid to the dollar store bin for the prize and the whole thing unwinds).

Do you or your readers have any helpful tips to keep our 5-year-old in bed or to make him calm enough to actually fall asleep on his own? Is it safe to lock him in his room? To lock our bedroom door? Do I stay outside his room and police him all night? Is there an effective punishment that will work? (Past efforts to take away screen time or sweets haven’t worked).

The root of the problem (and hopefully the path to your solution) is right here: “When asked why he won’t stay in his bed, he claims he is scared.”

That’s probably not just a claim. That’s a fact. And that’s what you need to focus on, rather than the resulting nighttime antics. Once you help him cope with and eventually overcome his (very real, very normal) fear of sleeping alone, those antics will more than likely cease on their own. Or you’ll be able to successfully re-implement the positive rewards or lost privileges — right now, there’s nothing you can offer (or take away) that’s a bigger deal than his feelings of fear. Or his fear of those feelings of fear, which is why he’s pushing himself to stay awake for hours and hours in order to avoid having a nightmare or worry about whatever specific “thing” he’s afraid of.

So first order of business is to get him to elaborate on exactly what he’s scared of. Does he have bad dreams when he sleeps alone? Is he afraid of the dark, scary nighttime noises,  or that there’s a monster/wild animal/bad guy in his room? Get him talking, or have him “act out” bedtime with some toys and see what he makes the stand-in toy for himself do once the Mommy and Daddy toys say goodnight and shut the door.

Once you figure out what specifically he’s scared of, offer him some kind of coping tool or “defense” against that fear. Let him sleep with a flashlight, listen to his favorite music, give him a spray bottle of “monster spray” or some other “armor” he can safely wear in bed to feel more empowered. Read books that speak to his specific fear, like There’s a Nightmare in My Closet, There’s a Monster at the End of This Book, Sweet Dreams for Sydney, The Dream Jar, etc. (Or — cough cough shameless plug — customize your own copy of my Twigtale book Everybody Gets Scared, using photos of him and his own room, own bed, etc.)  (And feel free to ping me if you’d like specific ideas on how to customize the text for him, once you figure out if it’s a nightmare/dark/monster fear.)

I personally wouldn’t ban him from seeking out another person, at least at first. Just ask him to at least TRY his new coping tool first, but reassure him that you are always going to be there and available to him in case of a nightmare or other anxiety. Knowing that your bed is an option — albeit not a every night, preemptive sort of thing — might be comforting enough to encourage him to TRY falling asleep on his own.

And once he’s at least TRYING, you can reinforce it with a reward system. Just make it something easily sustainable, like an extra 15 minutes of screens or new (free) game app download, or a piece of candy from a GIANT economy bag you only have to buy once.

Here’s my personal anecdote, so we can end on a hopeful note: My four-year-old also has frequent bad dreams and ALSO developed the habit of sneaking in to sleep in our bed or his brother’s night after night after night. It was absolutely a fear of nightmares (vs. the dark or a monster/bad guy thing) and he genuinely believed that being in bed with another person was the ONLY way to keep them from happening. So we had to correct and redirect that belief. We read him a bunch of books about bad dreams, where they come from, and what you can do about them to turn them into “good” dreams. We appointed a special toy as his “guardian” against bad dreams who would sit on the end of his bed and “keep watch,” and let him sleep with his favorite hat on as “bad dream armor.” He was SUPER skeptical but gave it a try, and sure enough, he had a couple nightmare-free nights in a row.

(We also started paying more attention to what TV shows the boys were watching before bed — they get one cartoon after dinner and take turns selecting a show, and we figured out there was a direct correlation between Ike’s nightmares and Spongebob Squarepants. So that one was banned from the pre-bedtime rotation and it made a HUGE difference. So if your son’s older sibling is ever in charge of the TV remote, take note.)

After that, we were able to make a deal with him: He has to start out the night in his own bed, and he has to fall asleep there. IF he has a bad dream, he can come sleep with us or his brother (who luckily has a double bed and sleeps like the dead). Early on there were certainly a few times he probably gamed the system with a false claim of a bad dream, but now he makes it through the night on his own about 90% of the time. We also allow brother bedroom “sleepovers” on non-school nights where they can sleep in each other’s room, but I check on them very frequently to make sure they are actually in bed and settling down. (They can read and chit-chat but no getting out of bed to play Bionicles or whatever.)

If he comes to sleep with us, there’s no talking — don’t ever ask for details about the bad dream at night, as that’s when it’s the most vivid and has the most “power” over your child. Instead, I silently let him lie down and go back to sleep, and then eventually one of us will carry him back to his bed once he’s fully out (he never fails to wake one or both of us up with rolling/wiggling/kicking). I really think the transfer back to his room is an important bit, because he gets comfort when he needs it, but then wakes up successfully in his room, on his own, without the nightmare ever returning.