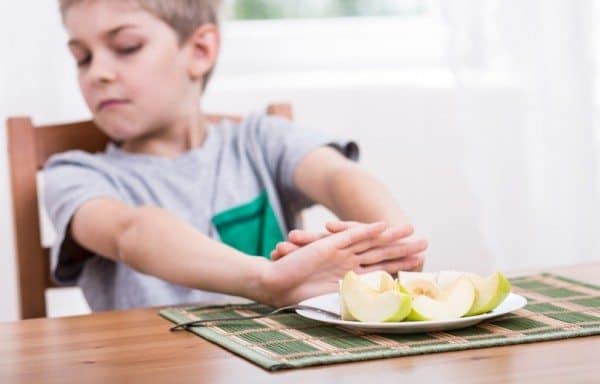 I’ve read your blog for years now as your younger boys are just slightly older than my 2 boys. I love everything you’ve had to say about Ellyn Satter, and bought the book but was always hesitant to try it. My older son is 6 and is extremely picky, with a very short list of foods he will eat. Not included on this list are things you would think he would be ok with like plain pasta (although he’ll eat mac n cheese), bread (although he loves pizza, but only from 1 specific restaurant) or even rice. So whenever I think I should try Satter, I can’t even think of what foods to put out that he would even try. I’ve been making him his own meal, and don’t mind doing it, its been working for us, and I know at least he’s eating something at dinner and it’s not a battle.

The issue is my 3 year old. He has always been an adventurous eater, loves broccoli, shrimp, chicken and while less willing than he used to be to try new things (and less likely to eat a sizable dinner), will do so, except recently he’s realized his brother gets pizza or pancakes for dinner and instead of eating his meal which he would like, insists he wants the same thing as his brother.

So I feel like I’ve reach a cross roads, where I have to bite the bullet and try something different so that my 3 year old continues to eat a variety of foods but I don’t know how to approach it with my 6 year old who refuses to try anything really. I could count on 1 hand the number of new foods he’s tried and he won’t even try bread which it seems is the fail-safe. He also many times will try something slightly different, take one bite, say he likes it, and refuse to take a 2nd bite.

I feel like he just will never eat dinner or will cry for the entire meal and it worries me. I know his fear of new foods is real and I don’t like the idea of traumatizing him. Also, he doesn’t like sweets, so dessert isn’t an incentive (although I know Satter doesn’t use it as one). I feel like I’m choosing one child over another and no solution can work for both.

We all know what I’m gonna say.

But BEFORE I say it, I will say this: I was you, once upon a time. I was in this EXACT SAME predicament. I had an older child who ate nothing. NOTHING! And then by some miracle, had a second child who ate everything.  They were even spaced exactly three years apart, like yours! And I’d grown complacent and hopeless about the older child’s eating habits (he had oral motor and sensory/texture issues after all!)…until the younger child started mimicking them, and demanding the same babyish, restricted, and nutritionally-questionable menu.

That was the kick in the pants we needed. We plunged headfirst into the Satter method when they were 5 and 2 years old and never looked back.

By 6 years old, it’s not just okay to eat such a limited list of foods. Something’s gotta give. Every once in awhile it’s cool to have a fun kids-only  dinner, but not every night. Pizza and pancakes are Sometimes Foods, You say it’s not a “battle” but only because you’ve thrown up the white flag of surrender and your child is now the Reigning Boss of Dinner. And now he’s winning his little brother over to his side, and pretty soon you will be short-order cooking nutritionally empty meals for both of them.

You CAN do this. You CAN take back control of the dinner table AND (even more importantly) expand your picky child’s diet to include more variety and better nutrition.

The problem is that yes, you just have to DO it. Like a Band-Aid.

If they don’t eat, it’s okay. They will not starve. They will not be traumatized because you are not going to force feed them, or punish them, or make any demands of them at the table other than to sit and keep you company.

“Okay! That’s fine. Would you like to talk about (school/Ninja Turtles/Minecraft/whatever) while I eat?”

When we first started out, my oldest’s list of acceptable foods was impossibly short and getting shorter by the month. We were completely at the mercy of his food whims at home and at restaurants, as even his acceptable foods had to be presented a certain way, much like your son’s one preferred source of pizza. He was truly a terrible eater and I’d (rightly or wrongly) gone along with it because of his sensory issues. I really believed he was flat-out incapable of handling certain foods and textures. I was wrong.

He’s 10 now. He continues to have some issues with very dense meats, like steak. He still tends to chew his food into a pulp before swallowing. He will always gravitate towards the carbs and leave the vegetables for last. None of these issues mean he can’t eat and enjoy 99% of the meals we make. I don’t force him to eat steak, but I’m not going to make him his own plate of chicken nuggets in its place. He can eat extra of whatever grain and vegetable sides are on the table instead. He knows this, he accepts this, he eats because he is hungry and that’s what’s on the table. His favorite meal I make these days are three-cheese calzones with mushrooms and kale. Not bad for a kid who used to live on peanut butter sandwich crackers.

(And like, ONLY the peanut better sandwich crackers from Trader Joe’s, at that.)

The fear of new foods is very real for young children, but is a very conquerable fear. And I think as parents we have a real responsibility to help our children conquer their fears in general, and this one is no exception. You can start with his preferred foods, served ever-so-slightly differently. Opt for a different pizza style or topping. Homemade mac-and-cheese instead of the boxed stuff. (Or even a different pasta shape or sauce color, if you want to take baby steps.) Add some chicken or peas or broccoli to it — my middle son will eat plain broccoli by the bowlful, my oldest hates it plain but LOVES it mixed in with his Annie’s.

(My youngest will eat around the broccoli and leave most of it, and that’s also okay. At least he’s not recoiling at the sight of it and rejecting the entire meal because GREEEEEEN STUFF. And he will eat chicken or peas mixed in.)

It took about three days for my oldest (at 5 years old) to finally grok to the New Dinner Order and realize that no, I wasn’t going to cave and make him something else. He was hungry. He ate. It wasn’t even anything all that amazing (I think our big breakthroughs were fishsticks and a cheeseburger), but it was huge for us at the time.

So for dinner tonight, just cook something. Spaghetti and meatballs with salad and garlic bread. Chicken with rice. Shrimp and grits. WHATEVER you were planning to make before reading this column. Put it on his plate and his brother’s plate. And…that’s it. He doesn’t have to eat it. He obviously more than likely won’t eat it. You can stem any tears and upset by reminding him that no, he doesn’t have to eat or try anything (although that would make you super happy!), and no one is going to sit there haranguing him into “one bite” or punish him if he refuses to eat.

Then change the subject and let him talk to you about something he enjoys talking about. (In my experience this tends to NOT be what happened at school or any topic I’m interested in, but to keep us all from focusing on and getting irritated by the whole NOT EATING thing, we go with the painstakingly long and detailed descriptions of TV shows.) Remind yourself that he will not starve. It is not the end of the word if he skips dinner, because breakfast/lunch/snacks are right around the corner. Focus on the quality of his potential calories over the quantity, because that’s his body’s responsibility to regulate.

(Note that eating out becomes SO PLEASANT post-Satter, because my kids don’t demand that their favorite foods look or taste that one specific way, i.e. non-boxed mac-n-cheese, a burger on a different kind of bun, pancakes with fruit inside instead of plain, etc.)

Our youngest, despite NOT being all that picky in general,  has been in full-on dinnertime rebellion mode for months now. I fully admit to sinking to his level and letting it become a thing.  (We’re doing much better, having given ourselves a Satter-style pep talk about NOT ENGAGING or CARING. and last night he inexplicably cleaned his plate.)

It DOES wear on you, night after night, watching your child not eat. I get that. I’m not going to sugarcoat that part. But then I look at my older two boys — one fully reformed picky eater and one who never lost his sense of food adventure to peer pressure — and remind myself that it’s worth it. He will eat when he’s hungry. He will learn to try new foods. He will not be the boss of you (or his brother) at the table. You can do it!!