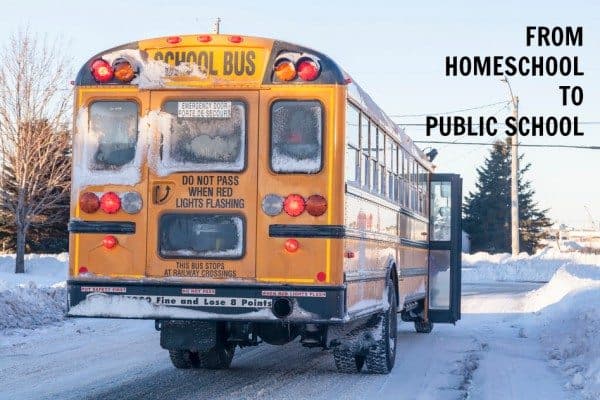 I announced on my personal blog yesterday that—after two and a half years of various arrangements for homeschooling through middle school—my son is going to start attending public high school, next month. My readers were unflaggingly supportive in response, mostly because my readers are awesome.

I am a lot of things (not all of them good, either), but I’m not dumb. I know that, in many ways, the decision to return a young autistic teenager to a crowded, diverse public school mid-year after years of homeschooling might appear… a little crazy. Heck, I’m willing to admit that it might be a little crazy. We have our reasons, though. And hopefully when all is said and done, it will work. Here’s what I’ve learned in the last few years of our flexible schooling that made it all possible:

There’s no such thing as the “wrong choice”

Please don’t take that as a blanket proclamation; I’m talking about when it comes to schooling and using our best resources to make those decisions, obviously. I don’t regret a single one of the schooling choices we’ve made for my son over the last three years, from keeping him in public school when things were rough to pulling him out to going to an almost-entirely-online curriculum. Each decision was made after weighing the available options and my son’s readiness at the time. None of them was perfect, but all of them brought him along to where he is now. When something stopped being the best fit, we made a different choice. Being able to adapt and not being married to any one choice as The Single Perfect Answer (don’t laugh; I totally would’ve believed that existed, years ago) has allowed us to give my son both a variety of experiences and render him a lot more flexible than he was when we started down this path. That’s huge for anyone, but especially a kid on the spectrum.

Do what works, not what “should” work

While the reactions to starting him back in public school mid-year have varied, some have clucked their tongues and suggested that’s a really tough way to transition back, and are we sure we don’t want to wait until next August? We’re sure. We’re sure in part because he’s ready now, and making him wait an entire additional semester has no benefit I can see. Mostly we’re sure because transitions are brutal for my son no matter when they happen, and to let him get the lay of the high school land and find his way mid-year is actually going to be easier, for him. He will feel like he sticks out no matter what; that’s just how it’s going to be, at first. But knowing that he only has to make it until May vs. “well, good luck for the next ten months” will be for him a much more manageable proposition.

Another reason this mid-year transition is ideal for us is that it allows him to spend a semester attending school for only half the day. Thanks to the accredited online courses he’s already completed, there’s no need for him to be a full-time student this upcoming semester in order to stay on grade level. (In fact, he’s already ahead of where he should be, but more on that in a minute.) And I knew that the best way to smooth his transition back into the brick jungle would be to create a schedule where, at least in the beginning, his course load and required face time were a bit light. When I brought this proposition to the school administration, the automatic response was “I don’t know that we can do that.” Well, they can and they will. It took some more legwork on my part, to fully investigate the options, to contact teachers to ask their opinions, to later essentially present a schedule to the guidance department and say, “See? This should work.” But it worked because I smiled and said, “I understand there’s a lot to consider” and then I worked it out to where they couldn’t say no.

Don’t ask if you don’t have to

Technically, my son is in 8th grade. There have been many discussions over many years about allowing him to skip a grade or two, and aside from any logistics required by the school, it never felt like a good idea. Although my son would have little academic difficulty performing well above his assigned grade level, his asynchronous development has left him lagging far behind his peers, socio-emotionally, for most of his school experience. In addition, he’s always been one of the smallest kids in his class. Moving him up always felt like a recipe for disaster. But the homeschooling years have brought us leaps and bounds of progress in his ability to control himself and interact well with others, plus this year finally brought that growth spurt everyone said would show up eventually. Now moving him ahead a grade means putting him where he needs to be, academically, without a giant social rift between him and his classmates. (Make no mistake, he’s still in a different place, developmentally, than they are… but the gap is a lot smaller than it used to be.) After talking with some other folks in our district who’d gone through a similar school switch, and checking to make sure that he did indeed have as many class credits as a mid-year freshman should have, I simply… registered my son in 9th grade. I don’t know what would’ve happened if I had asked. I made the decision not to, lest it become One More Issue. (I have since confessed to the school official who is working most closely with us to get him situated, and her only response was, “Well good for him!”)

Do meet your kid’s needs, but be realistic

When my son used to be in public school, his special needs were served under an IEP, and for his virtual school classes, he was served under a 504 Plan. [More on navigating IEPs and 504s.] I expect he’ll have a new IEP at the high school, but we still have to go through the process of an eligibility determination, meetings, planning, etc. In other words, it won’t be in place right when he starts classes. There’s no way to speed up that process and grousing about it would only alienate the school officials I need on our side, so I issue frequent but uber-polite check-ins to see where we are in the process and give them the space to do their jobs. I hold firm on what we need right now while asking “How can we best make this happen before the IEP is in place?” So far it seems to be working.

Do view this as the next great adventure!

No matter what happens, no matter what trepidation I may feel about sending off mah baybee, I can wholeheartedly celebrate how far he’s come, his continued willingness to step outside of his comfort zone, and the fact that we’re in the very fortunate position of having options. I love that we’ve had this time at home, and I’m so, so proud of him for recognizing that he wants something else, now. No matter how bumpy the ride, he’s a brave kid, so how could this not be exciting? It will be a success, or it will be a learning experience and we’ll move on. He’ll be fine, either way. Better than fine—he’ll be great. Because he already is.