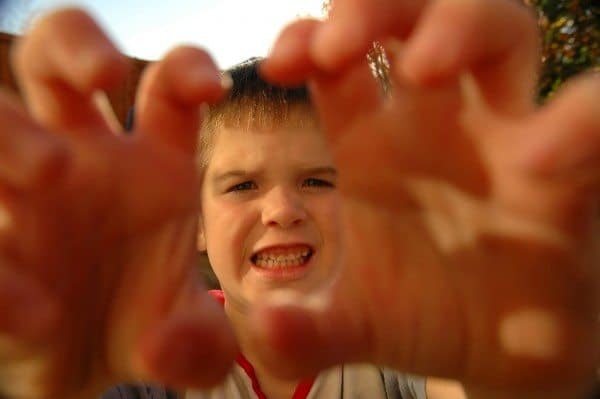 When Your Child Bullies You

I’m trying to figure out if I missed one of those Mom Memos telling me how to handle this stuff. Part of it is a simple question. Am I supposed to to let mistreatment/lack of respect to me by my child (younger of two boys, age 9y) be that proverbial water off a duck’s back and, when he’s calmed (10 min, 1 hour, day of school or overnight) just act as if nothing happened?

If anyone else treated me the way he treats me, I’d have to confront them. (I have, with him, multiple times) If they continued to treat me poorly I would end up removing them from my daily life. I’m too old to be treated poorly by a so-called friend. But he’s my kid and I can’t exactly avoid him. He can’t apologize in the moment, I know, but if I try to bring it up gently later I discover that his reality/history is totally different from mine. He sees nothing he’s done wrong and bringing it up just starts another fight.

He’d been up for 5 minutes today when he got angry at me for not washing his favorite jeans. I took the bait and asked if he’d put them in the laundry room. BOOM! All my fault. I walked away from the tantrum and went to prep breakfast. Favorite jacket got left at school. He knew this yesterday and I mentioned to him 4 times (afternoon, night, at waking, and at breakfast) that he needed to choose an alternative. Time to leave for school, no coat is “right,” so BOOM! All my fault. Refused to give me a goodbye.

I know he’s a sensitive kid so I give warnings of transitions. I try to give him simple choices. I’ve taught him calming techniques. All I do is try to prevent explosions. I’ve spent nine years walking on eggshells. My husband gets a proportional amount of this, but just isn’t around him as much. His 12yo brother is so laid back he can’t be compared.

I can look back and see how it has changed, but not improved. When he was little, he took his frustrations out on me physically, by hitting, kicking and biting when someone else had upset him. (He’d run home from the neighbor’s to kick me!) We got through that stage and it has gradually become verbal abuse. I really do use the word “abuse” on purpose. I feel like the victim of bullying. I keep going back to the person who hurts me and getting more. I’ve got to stop this cycle before he becomes a teen.

Okay. So you need some help. Your son needs some help. And that help should probably come from a therapist, child psychologist or other “expert” type person. (And I am most emphatically NOT ONE OF THOSE.) You’re absolutely right that this cycle of blame/anger explosions has got to stop, for both of your sakes. He can’t treat people like he’s treating you, he’s got to get his anger under control and make some big leaps in the personal responsibility department, and you’ve got to stop being his unseen and unreported victim. (Since I’m assuming this behavior doesn’t carry over to school and his friends or teachers?) And that whole rewriting history is a big red flag — he’s not going to stop when he’s able to twist and revise what happened and perpetually make it your fault. That’s what abusers do, after all.

I’m not going to attempt to make any diagnoses via Internet here, especially for a child I’ve never met based on five short paragraphs. I could make a lot of guesses and yammer off a lot of potential acronyms and stuff, but I’m not.  I AM going to empower you to get on the phone TODAY and kick a little ass. For yourself and for your child. You are absolutely right: This is not okay. HE is not okay. But it’s going to be okay.

Call his pediatrician. Call his school and ask to speak with the guidance counselor or school psychologist. Get recommendations for a therapist, child psychologist or center in your area that specializes in special needs children and offers psych evals and therapy. You will probably want to interview a couple possibilities and find someone you feel comfortable with (and can see your son opening up to), someone who has similar beliefs on medication and family involvement. Someone you trust to honor your son’s confidence but also escalate appropriate concerns to you. And you definitely want someone who can give you practical guidance for navigating your son’s moods and how best to consistently respond to his verbal abuse with the goal of SHUTTING. THAT. DOWN.

Listen, one of my kids has a therapist. Anxiety, rigidity, inflexibility, etc. All that stuff. Older family members and strangers like to make grumbling noises about kids these days and their therapists and their designer diagnoses and their lack of butt whoopings and such, but I see it more as the result of increased awareness on mental health issues in children. Not every mental health problem just magically shows up in adulthood, out of nowhere with no warning. (Some do, obviously. Just not all of them.) An adult who suffers from anxiety or depression or defiance or narcissism probably struggled with it as a child, too, in some form or another. And maybe everyone around them just assumed they needed to grow out of it or learn to calm down or get their butt whooped. Maybe what they really needed was an understanding adult to listen to them and help them recognize and cope with the problem, and help their family better cope and support.

In the meantime, I’d suggest checking out a few books, if you haven’t read these already. (If you have, you have my full permission to roll your eyes and offer a sarcastic THANKS CAPTAIN OBVIOUSPANTS at your computer screen.) The Explosive Child, Transforming the Difficult Child and The Difficult Child. There are also a lot of helpful articles here about defiance/disrespect/verbal abuse in children. Your son’s therapist or doctor should also have some handy recommendations to help you navigate the first part of your question, i.e. navigating the day to day with a kid who treats you badly, while he or she works with your son to break the cycle and STOP treating you badly.