Twitter Facebook Pin It Email Article
Prev Toddler Suction Plates, Bowls and Mats That Your Kid Might Not Be Able To Throw Across the Room Next Toddler Mealtime Battles: The Dinner Table Escape Artist 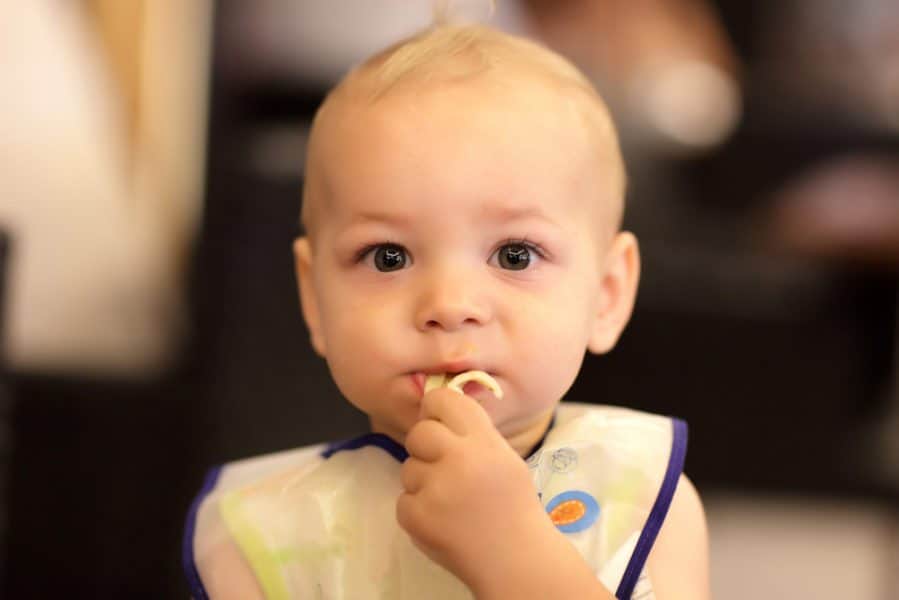 I just discovered your site and have been loving the toddler advice columns. (SO glad to know I’m not the only one whose toddler suddenly hates the high chair.) But I have a question that I didn’t see addressed anywhere else:

How do you avoid short-order cooking and eat as a family when you’re busy working parents?

I pick my daughter up from daycare after work and we get home around 5:15. She’s usually hungry right away and so I end up giving her foods that I can serve after a quick stint in the microwave–heating up frozen chicken, peas, cutting up some fruit, etc. I try to keep it healthy, but I’m “cooking” a separate meal for her. I could probably give her a snack and try to stretch her out some so I could make a meal, but it’s so hard to cook and take care of her at the same time. (She is one year old, learning to walk, and going through major separation anxiety.)

Plus, even if I could cook the family meal before she wanted to eat, it would just be me and her. My husband doesn’t get home from work until 7:30, and she goes to bed around 7. Do I eat with her and make my husband eat by himself? Do I eat both times? And seriously, HOW do I cook while chasing after a toddler?

There will be a time when yes, it’ll be GREAT if you can swing a couple meals as a family together each week — could just be on the weekends, or maybe your husband can swing a little flextime to get out of work earlier on say, Wednesdays. And there will be a time when cooking a meal won’t be such a multi-tasking nightmare  — when she’s old enough to entertain herself with toys for more than five minutes, when she’s old enough to safely be alone in the next room over without risking a trip to the ER, when she’s able to contribute and help with basic food prep tasks like pouring, stirring, etc.

Now is just…not that time. And that’s okay! Please don’t stress over this one. Not now, not yet.

She’s still mastering eating solid foods in general right now, and still on a very different sleep/awake/eat schedule than the rest of the family. So it’s really perfectly acceptable to make a separate meal for a one-year-old. As long as you are presenting her with a variety of flavors and textures and introducing new foods on a semi-regular basis, you have nothing to worry about.

The whole “short-order cooking” thing is a problem when you’re making a separate meal for a child who is simply refusing to eat the meal you’ve already prepared. And that could be a meal you’ve made for the family OR a meal you’ve made just for them! They reject Food A so Mom immediately rushes to offer Food B (and then C, D, etc.) as an alternative: “Oh, you don’t like the chicken with rice and vegetables? Oh, okay, let me get that spaghetti that you liked from the other night. Still no? Okay, here’s some pizza.”

Eventually, Mom gets pretty sick of this (I mean, who wouldn’t?) and stops even trying to offer Food A, and figures maybe it’ll be easier if she just makes the pizza/macaroni/nuggets from the get-go and avoids the dinnertime battle altogether.

But that’s not what you’re doing! Stop focusing (for now, because it is what it is, schedule-wise) on the fact that you’re making her a separate meal and instead treat her meal like you would treat a meal as a family. Not necessarily in terms of WHAT you’re making and the preparation, but in your EXPECTATIONS. You will offer her a variety of foods, prepared in a way that is accessible and safe for her. And she will eat what you put in front of her. Maybe not all of it, but that’s not your responsibility. Any food that goes uneaten will not be replaced by something else, and any food that goes uneaten will not be turned into a “EAT IT EAT IT EAT IT” battle of wills and/or “CLEAN YOUR PLATE YOUNG LADY” portion size policing.

If you are concerned that her meals are too repetitive or falling into a flavor/texture rut, that’s another thing. Try re-offering foods that she’s rejected in the past, even if they’re still “easy” or microwaveable. Pledge to buy at least one new food for her at the grocery store each week. (And this could be as simple as beans instead of peas, ham instead of chicken, or an unusual flavor of frozen veggie burger.)

(My toddlers all loved an Indian-spiced veggie burger from Trader Joe’s. And guess what cuisine they absolutely LOVE to this day? VICTORY FROM THE FROZEN FOOD AISLE.)

We’re fortunate enough to have a family schedule that allows for most weeknight meals together, but I still use Sunday afternoons as a kid-friendly meal-prep time (like I did back when I was making baby food to portion and freeze for the week). I bake lunchbox-friendly mini-muffins, a week’s worth of sunbutter-and-jelly sandwiches, prep a bunch of little healthy yogurt smoothies, pancakes, etc. Toddler dinner prep can be done the same way. Make a big batch of veggies when your husband is around to watch her, then portion in containers/bags and freeze them. (This way you can offer more “complicated” veggies that take longer to cook like beets or sweet potatoes, without always defaulting to the bag of frozen peas or processed puffs/fries that often add a ton of extra salt and sugar.) You can get creative and whip up your own meatballs, fish cakes, veggie patties — all things that really don’t take much time, can be done in big ol’ batches, and freeze and reheat in a snap during the week.

I know this all probably sounds like the LAST thing you want to spend your weekend doing, and if you really can’t or just don’t want to, that’s okay too! Just sharing what I’ve done and honestly find pretty relaxing and VERY satisfying, knowing how much time I’ve saved myself while also making foods for my kids that are wholesome, healthy, delicious…and convenient as all heck, later in our super-busy week.

Finally, for when you DO want to sit down and eat with her (or are able to score a rare and wonderful meal with all three of you), I have two final words: Slowwwwww Coooker. Make the meal the night BEFORE, after she goes to bed. Throw everything in the slow cooker. (If you don’t have one, I’d recommend a programmable one with a delayed start, to avoid the dreaded “Oh crap I left for work and forgot to turn the slow cooker on.”) Then you can eat with her and model the “you eat what the grown-ups eat” expectation without having to actually cook and care for her at the same time. When our boys were younger, we did slow cooker meals at least two or even three times a week. (At most, I’d need to whip up some rice or pasta, while the cooker usually took care of both our protein and the vegetables.) Plus: You’ll end up with great leftovers you can nuke for her the next day.