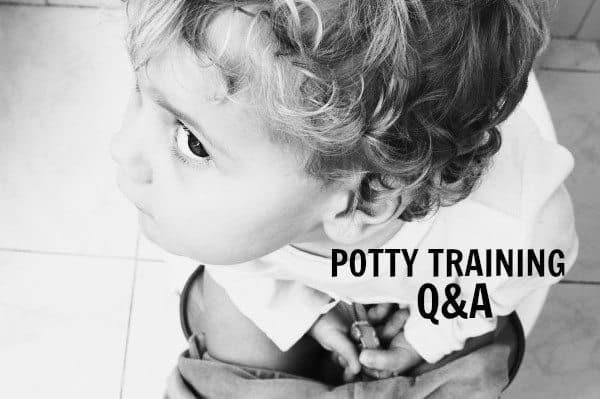 Can This Potty Training Be Saved?

We are on Day 7 of the potty training bootcamp. Me, my husband and daughter (2.4) have not left the house other than our front yard and she is only wearing undies. We followed the 3 Day Potty Training Program and at first I thought it was going great… 4 pees in the toilet on the first day and to this day, have only had minimal (3 total) nap/nighttime accidents. My daughter is ready.

However, she is stubborn. She needs and will go pee every 3-5 hours during the day but that is after 2 hours of the pee pee dance and us bringing her back and forth to the toilet to try. She screams NOOO to the potty I DON’T HAVE TO GO.. and also no to anything and everything else we are talking about even if it’s not a question or anything to do with potty. She will scream “I DON’T” out of the blue and that’s when she really has to go… we take her to the toilet but she just will not sit.

There are sometimes she sits if she has a toy or video but most of the time she fights it… won’t sit even if we try to put her directly on it.

She also becomes violent, wants to hit me and has a temper tantrum that I have never seen before. I am getting one of these a day for the last 3 days. This morning she woke up and we were rocking in her chair and she just hit me out of the blue.

However, it’s very inconsistent. For example yesterday, my father was over, she sat on the toilet for me (with a popsicle) and my dad gave me a break and she ended up releasing while he was there.

I’ve spoken with her doctor saying that if she peeing 4-5 times a day she is OK but I don’t know how to overcome the anger and the fight. My husband and I are so patient and positive, have never yelled. If anything, I’ve tried to reason with her – done the “this is our job”, “we know it’s frustrating and thanks for trying” and kept a smile on our face, for the most part.

I know this is all over the place with her going on and fighting..We’re just at a loss… and I’m hoping you or someone may have some advice.

Apologies for the long winded email.

So I’m curious about what life was like BEFORE you started potty training boot camp, and what led to your decision to attempt it?  Was she showing any curiosity or interest in using the toilet? Asking to have wet/soiled diapers changed ASAP? Was it a daycare/school-based decision? Was there anything (before your initial but short-lived run of potty-using success) that made you feel she was definitely ready to train?

Because unfortunately, sometimes a toddler’s physical readiness (i.e. their ability to recognize and communicate their need to go) and emotional readiness don’t quite line up at the same time. And you do really need both. (I’m sure you’ve heard — and want to throw things at — the ol’ “she’ll potty train when she’s ready” and about all the kids who just wake up one day and magically train themselves.) Two years, four months is still pretty young, and to still be in full Boot Camp underwear-only trapped-in-the-house mode after a full week is not a fun time for anybody. She might just…not actually be ready yet, and stepping back and taking the pressure off of her (AND YOUR POOR SELF) might be worth considering. But let’s see if there’s anything else to try before we throw in the towel.

Some kids are resistant because of specific fears that can be addressed — they’re afraid of falling in, of the flushing noises, of “losing” part of themselves when they go (very common for the poop-resistant kids). For these, you can assure them that the potty is just like the drain in the tub — they won’t go down because they don’t fit! — or try a small separate potty chair vs. the “big” toilet, agree to flush after they’ve left the room, wave bye-bye or sing a song to their waste and the toilet paper or a Cheerio while you flush, etc.

Other kids are resistant because of a simple — but oh so strong and important to them — need for control. You CAN’T control this. But she can, at least up until a point. (Not that a stubborn toddler will let a little thing like pee actively running down her legs stop her from insisting that no, she really doesn’t NEED to use the potty if she doesn’t WANT to use the potty.) What aspects of this process can we “let” her control?

Can she set a timer for herself, by hitting buttons on a kitchen timer or using an app on your phone? That way whatever tells her it’s potty time is “her” timer, not yours.

Did she get to chose her own big-girl underwear? Is she upset or bothered about only being in underwear? Let her pick her own underwear and clothes (at least from an array of easy-to-pull-down/good-potty-access selections). Perhaps the potential for wetting actual clothing she likes vs. just underwear will be motivating.

What’s her incentive for using the potty? Is it something she really, really wants? I know everyone likes to start with stickers and M&Ms but TONS of toddlers simply do. Not. Care. about our stupid stickers and M&Ms. Take her out to a toy store and have her pick something she really, really wants. Buy it and bring it home. Stick it up on a shelf in the bathroom or somewhere she can see it, and then make her earn it via X number of potty successes or staying dry (and NO TANTRUMS!) for X number of days.

Alternatively, you can keep the expectation in place that she will use the potty, but drastically reduce your hands-on involvement in the process. Don’t ask her if she has to go (you already know her answer). If you see her doing the pee-pee dance, casually observe that “It looks like you have to pee” and leave it at that. (I originally typed “use the potty” instead of pee but I’m thinking that might be too much of a trigger word for her at this point.) If she has an accident, that’s fine. That’s how a lot of kids learn because it’s no fun! Have her deal with her wet clothes herself — don’t rush to strip them off, but have her undress and put them in the hamper and choose new ones. Doing this 3-5 times a day might get boring faster for her than unleashing her rage at you every time you repeatedly try to force her onto the toilet to avoid the accident in the first place. Stay calm. Stay matter of fact. Don’t let her know how badly you want this.

And!! You mentioned her grandfather coming over and that seemed to help. This is SUPER COMMON and probably the brightest ray of hope I see in your letter. Every one of my three boys all needed someone who was Not Me (or their dad) to push them over the potty training finish line.

For one, it was his favorite babysitter. He fought me all dang day over it (probably around day three of Boot Camp) but when she showed up ready to enforce the new no diapers/potty training status quo, that was pretty much the end of his resistance. Oh, okay. The next one, we started Boot Camp on a Saturday, knowing that our nanny could show up and take over on Monday morning. For our youngest, we had help from his preschool teachers. You don’t have to do this all on your own — and in fact, it sounds like you shouldn’t! Get Grandpa back over. Call your babysitter. LEAVE THE HOUSE. Treat you and your husband to a movie and a dinner out and see how she does with an adult who is NOT Mom or Dad. (I’m betting she won’t scream at or hit an adult who isn’t Mom or Dad, either.)

But look. You might need to cut your losses here if none of these suggestions work. Potty training should not be this traumatic and upsetting or send your toddler into regular, violent rages. It’s super frustrating to know that your child is technically “ready” to use the toilet but still just…isn’t ready. There’s only so much trickery and subterfuge and insistence we can do — it really does come down to her deciding that okay, this is something she’s on-board with (even reluctantly).

Will you ruin things forever by raising a white flag now? No, I promise you won’t. It’s okay to try again in a few weeks or even months and let her move past this refusal phase on her own. Tell her you love her. Tell her that yes, you really would like her to wear big-girl underwear and use the potty and that you KNOW she can do it and be awesome at it. Then ease up. Live a few days where potty training isn’t the sole huge focus of her day (and your attention). Put her in a pull-up and take her somewhere fun. Go to the park! Apple picking! Bring her with you when you use the restroom, and ask her if she’d like to try. If she says no, drop it. But she might surprise you if she senses that the pressure is off and it really is her choice!

But she’s still very young. She has a LOT of time to get this right. If now isn’t the right time, that’s okay. Lots of us misjudge our child’s potty readiness (or simply hope that because we want it to happen, we’ll be able to MAKE it happen) and end up having to step back and try again later. Either way, you guys need to get out of the house and get back to living life. (Even if it’s in a pull-up!)

1. When to Surrender & Give Up the Fight
2.  Motivating the Unmotivated Kid
3. Why Won’t My Kid TELL ME When She Has To Go?