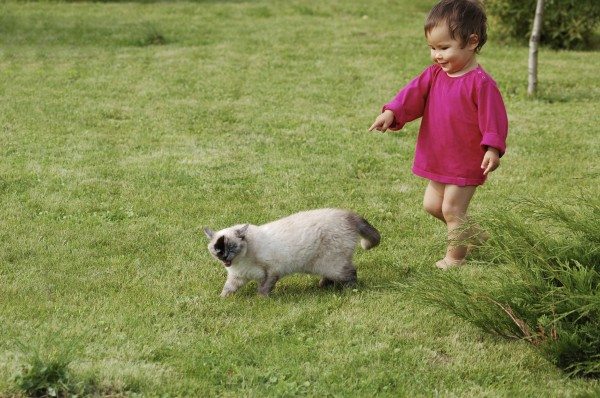 The Toddler & The Cat

I have the sweetest, easiest baby ever and lots of people say so, not just me. He is fourteen months old and he is suddenly starting to have a behavior issue. Oh No! We are not used to this around my house, what with Captain Happy who has had no sleeping troubles, no eating troubles, and is happy to play on the floor by himself for thirty minutes at a time.

The trouble is we ALSO have a geriatric cat named Oscar. He is 16 years old and has always been very laid back. Up until about six months ago, we had another geriatric cat who made Oscar’s life a living hell for 15 of his 16 years. She would trounce him every chance she got until she up and died. He was bigger and stronger than her, but no matter, he just put up with it. Well, now the baby has decided that he loves Oscar. He loves to pull his tail, poke him in the eyes and hit him with blocks. And the cat just puts up with it. In fact the cat seems to purposely put himself in the line of fire. Gah!

So. We are doing the holding the baby’ hands and saying no very firmly thing. He smiles and just continues to poke at the cat. Then we get firmer and then he cries. Meanwhile the cat maneuvers around and flicks his tail ever so temptingly towards baby. Sheeesh – no sense of self-preservation. Anyhow I know this is not the first behavior we will have to deal with and I am sensing that we are giving off something that makes baby think we (and the cat) are playing a game. Any thoughts on getting my poor cat some peace in his golden years?

So…I’m no feline behavioral specialist by any means, but the detail about your other cat jumped out at me. Before we get into your son’s behavior…is it possible that Oscar simply misses your other cat, despite all the torture and provocation and general pain-in-the-assness? Because really, we have an uber-laid-back cat too, who weighs twice as much as our dog and still allows her to mess with him and his food and warm sunny spots on the floor. And who regularly allows our children to use him as a pillow and has also sat still and even PURRED during less-than-gentle petting sessions with them. But when he’s had enough — really and truly had enough — he WILL get up and move. Occasionally he’ll hiss and lunge at the dog’s head, but even that seems to be more of a LET’S PLAY A GAME, HAMSTERDOG, BRING IT thing than anything really angry or vicious. The kids, on the other hand, have never, EVER been hissed at.

So while I am NOT saying that you should just stop worrying all together and let your kid do whatever to the cat, I am thinking that Oscar really might not be that bothered by your son’s clumsy “affection.” It’s probably in keeping with what he was used to with his departed companion. As long as he’s NOT a risk for say, hissing, snapping or scratching your son, I’d say you CAN relax a little bit and just keep focusing on teaching your son the proper way to approach and treat animals.

Because yes! That’s a Big Thing! For both the animals’ sake and your son’s, because there’s always the chance of him seeing someone ELSE’S cat and assuming that they are all super-docile and tolerant like Oscar. And then he gets hurt when he pokes or pulls. Bad news.

Beyond that: Whenever possible, try try try to avoid using the word “no.” Just because to your son, that word doesn’t really TELL him anything. (Not to mention he probably hears it so often that it’s sooooo easy to tune out.) He wants to play with the cat. He doesn’t want to stop or listen to “no” because he waaaaants to plaaaaay with the caaaaat. So instead of just telling him “no,” tell him how to correctly play with the cat. And even more importantly, show him. Don’t respond to his rough treatment with the same, like yelling and hand-squeezing. He’s far, far too young for that, it’s not sending the right message, and he’s really not doing this deliberately — he just doesn’t yet understand what’s appropriate and what’s not.

With our boys and the pets and the initial pulling/poking/hitting phase, we used the word GENTLE. Over and over again. When we saw rough treatment, we GENTLY took their hands and GENTLY stroked the back of their hand and arm while saying “GENTLE. GENTLE.” Then we helped them GENTLY stroke the pet. Then we heaped on praise. If they mimicked the motion on their own, they got more praise. As their vocabulary expanded, we included words and concepts like “oh that HURTS kitty! we LOVE kitty. show me GENTLE on the kitty.” Sometimes I would ask them to simply “show me GENTLE” when the pets weren’t around, and they would either stroke their own hand or mine. And that’s when you know you’re at least getting through to them, even if they do occasionally still find that cat’s flicking tail to just be OHMYGODSOIRRESTIBLE.

So. Try to swap “gentle” for “no,” in this case. Make a game out of “gentle!” Show him gentle on his body, your body…and on stuffed animals and toys. In his mind, the cat is kind of a toy, so it’s hard for him to figure out why it’s okay to be rough with some stuff and not other things. Usually, CONSEQUENCES are what teach kids this lesson — the toy breaks and you can’t play with it anymore, or the cat scratches you and it hurts. Oscar, bless his sweet kitty heart, isn’t going to help you in that department. But still, your son WILL get the idea at some point, and it will probably sink in sooner if you really focus on showing him HOW to best interact with his pet instead of just demanding he leave the cat alone all the time.

If Oscar does play with toys, like string or balls or catnip mice, or chase after treats, think about teaching the baby to play those games too. Have him dangle the string or toss the treat and make playing with the cat mutually enjoyable, instead of Oscar being an irresistible off-limits fluffball that gets him yelled at. (I know the odds of a geriatric cat “playing” anymore are probably laughably low, but it might be worth pulling out the yarn again, since he seems pretty pleased with even the negative attention from the baby.)