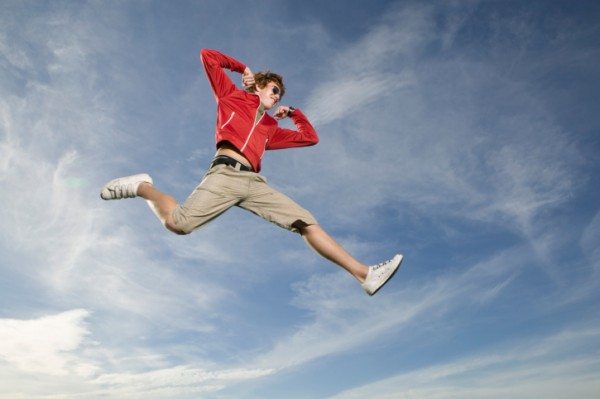 Taking Flight in the Cold

In the not-quite-seven-years I’ve lived here, I’ve seen it snow just a handful of times. When it does, of course, everyone loses their minds. One year it snowed, and then the temps dropped so low that everything froze; because we don’t have snowplows or industrial salt (or anyone who has any idea of what to do when there’s ice on the roads), school was canceled for four days in a row. As a native New Yorker, this made me laugh. Okay, it made me laugh a lot.

I’ve been joking for days that our unseasonal plunge into frigid temperatures is due to my selection of Christmas present for my son this year. First, you have to understand that typically we celebrate Christmas and then one or both kids leave to visit their dad until after New Year’s. Second, you have to understand that I know this may sound a little weird. His “big” present this year was… a trampoline.

Trampolines are awesome, right? I always wanted one, as a kid. And this past semester, my son went to a homeschool co-op location that had a trampoline available for use during recess. He used it all the time (and talked about it even more), so I decided to get him one of his own. There’s nothing all that unusual about this chain of events, except that my son just turned 14. I’m aware that this is the age where most trampoline-owning families go ahead and put theirs on Craigslist because their kids are too old to play on it anymore and they want to reclaim the yard space.

Lucky for us, we have a big yard… and years of grappling with the developmental differences autism has brought to our family has made “should” a word we don’t use all that much.

My son was thrilled to discover that it wasn’t just a trampoline, but a sizable one—plenty big enough to jump on with his sister, or friends. (His sister tried to act like she wasn’t interested. She’s almost 16, y’know. Mind you, if it ever warms up, I’m pretty sure she’ll be the first one out there.)

We even sprung the surprise a week ahead of Christmas, because we knew my son would be gone for so long right after, and this wasn’t exactly something he could put in his carry-on luggage. Our intentions were good! But first it rained for a full week—meaning we couldn’t even set it up, much less use it—and then Christmas arrived and he left on vacation. Although the temperatures were already trending downwards, my husband was out there in his hat and gloves, getting it all rigged up in anticipation before my son came back. By the time he returned, it was already in the low 30s. Not exactly bouncy weather.

So it’s my fault. All parents scrambling for childcare coverage today in my local area, I apologize. School has been closed in dozens (hundreds?) of districts today not because of snow, not because of ice or other unsafe driving directions, but because it’s too cold. This is a thing that happens in the south.

Had I purchased my son a fancy video game console or other more age-appropriate indoor gift, I’m sure we wouldn’t be in this predicament. But noooooo, I had to go and buy him a trampoline, and when a week of rain wasn’t enough to dampen his enthusiasm, Mother Nature had to pull out all the stops. It’s the trampoline’s fault there’s no school today. I mean, clearly. And because I bought the trampoline, it’s my fault.

Worse still, yesterday was my son’s first day of public high school. I don’t mind telling you now that I was a complete mess. The decision to go back to school and the initial transition preparation had gone seamlessly, but just a couple of weeks before winter break, it started looking like the district had decided that every hoop we successfully jumped through meant we should be presented with two more hoops. We did what we had to do—my son was subjected to hours of testing and a lot of scrutiny, and I ended up having to go to our superintendent to address some issues—and everything was ironed out before the semester resumed. But yesterday morning my steely resolve of the previous month melted away, and I was left standing in the kitchen with my amazing, perfect youngest teenager… my small-for-his-age, quirky, not-always-very-good-at-meeting-society’s-norms boy, and the thought of setting him free at our local high school was making me feel woozy. I hid my feelings as best I could (he didn’t notice, but his sister did tell me to “stop freaking out” at one point), and off we went. I drove away before the first bell rang, alternately thinking “this was a huge mistake” and “how long before I get a phone call from him that he’s been stuffed inside someone’s locker?”

When it came time to pick him up, my worries vanished. He was bubbling over with happiness; his teachers were awesome! The material they’re studying is so cool! One kid already tried copying his paper! (Nothing makes my nerdling happier than being recognized as being smart.) “High school is the greatest!” he declared. It had gone better than I’d dared hope (complete with emails from his teachers about how well it had gone), and reminded me of all the reasons we’d decided he was ready in the first place.

He was disappointed that school was canceled today, of course.

So I just wanted to apologize to everyone. I mean, I’m pretty sure the low temperatures (and subsequent school closures) are 90% because of the trampoline, but it also maybe 10% because said trampoline’s owner may be the only kid in the metropolitan area who really, really wanted to go to school today. I’m sorry. Kinda. A little. Okay, not really.

Someday we’ll look back on this year—the year of the trampoline—not as the year it was so cold, but as the year my youngest learned to fly.