Twitter Facebook Pin It Email Article
Prev Taking Flight in the Cold Next Graduation is not the goal; it’s the by-product. 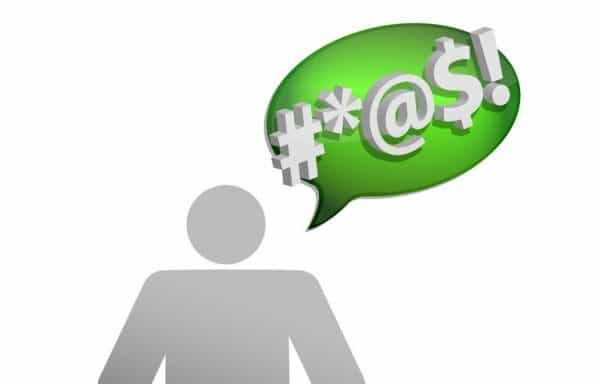 Despite my frequent jokes about how you can’t take me anywhere (or you can take me anywhere twice—the second time to apologize), the truth is that I’m fairly adept at behaving like a civilized human being when I must. I know which fork to use when at a fancy table. Although my everyday life tends towards jeans and t-shirts, I clean up and dress up when required. And please know that I would never dream of cursing at a stranger or even using “strong” words in polite situations.

That said, I’ll confess that… I swear. Not a lot, not indiscriminately, but yes: I use naughty words sometimes.

I’m well-educated and something of a vocabulary snob. I love fancy words. Heck, I make my living as a writer. Some say—and I’m not sure I’d disagree—that cursing is lazy. It’s easy and unimaginative. A true wordsmith can express what needs to be said in a much more creative way, right? Sure! That’s true. I’d also posit that sometimes there’s a feeling a person feels which can best be expressed with the judicious placement of an f-bomb. That’s true, too.

Not everyone gives in to salty language. Some think it’s crass and unnecessary, and I respect their opinion. What I’m telling you, though, is that I, personally, enjoy the occasional foray into carefully-monitored usage of some swear words. I find them a useful augmentation of language, particularly in times of distress.

When my children were little, I made sure not to say anything around them I didn’t want to hear parroted back to me. I was successful, too; we never had one of those “oh no, the toddler overheard me hit my thumb with a hammer and is wandering around the house saying, OH S***!” sorts of things. In keeping with my general philosophy about swearing—there is a time and a place, and within earshot of little ones is neither—it wasn’t a problem to make sure the words my children heard were never problematic.

As the kids grew, I had to think harder about the things that came out of my mouth. I don’t think I’d really considered the phrase “that sucks” to be all that coarse (despite a grad school professor asking me if I understood the derivation, and me arguing that it’s become part of the common lexicon)… until the first time I heard it coming out of my daughter’s mouth. She was about 7, and yeah, hearing her say it made me reconsider.

I’d love to tell you it was a carefully considered benchmark, but the truth is that it was a pulled-out-of-thin-air point in the future (maybe loosely based on high school entry age?) that seemed ages away. Somehow it stuck, too. Over time the kids were warned of other words they weren’t allowed to use until they were 14, such as “crap.”

You know what happened, right? My daughter turned 14, and a few of the previously forbidden words crept into her vocabulary. (It should go without saying that as a teenage girl, there are many, many things which she believes suck.) As a general rule, she’s not given to swearing. (Complaining, yes. Swearing, no.) But then my son turned 14, and suddenly I was listening to my children trying to one-up each other with dueling “that’s what she said”s and describing someone as “a complete douche” being countered with, “no, a complete douchecanoe,” and I felt conflicted.

On the one hand, I feel like we’re clear about the difference between “this is not the nicest possible language” and “these are words I really don’t want to hear you say at all.” By some people’s standards, my kids aren’t even swearing. (Though, let’s be clear: What they say in front of me and what they say with their friends differs. That’s fine with me.) Furthermore, these are words I sometimes use, and my kids are now just a few years away from supposed adulthood. I figure there’s something to be said for allowing them the space to try out some of these forbidden fruits while both removing part of the allure (what’s the fun if you can say it in front of your mom?) and reminding them that certain language is not to be used in polite settings or around younger kids (I guess our home doesn’t count).

On the other hand, I feel like I have bigger fish to fry when it comes to being the word police for my kids. If I’m being honest, I’d rather hear my kids swearing (in proper context, not in the middle of church or anything) than hear them call each other demeaning and/or hurtful names or tell each other to shut up. There was no admonishment for the whole “douche” conversation mentioned above other than “Ooookay, that’s enough.” In contrast, in our home, “shut up” is a sure way to earn yourself a swift consequence, because it’s just plain rude. And insulting someone is mean, even if you use “regular” words like “stupid” or “ugly” to do it.

Words matter. How you use them, when you use them—it all matters. To me, swearing is sort of the greasy potato chips of the language word. I don’t see the harm in an occasional indulgence, but they’d never work as a steady diet, and I certainly wouldn’t show up at a formal event toting a bag of crinkle-cuts, either. I want my teens to understand that the way they choose to express themselves will cause people to make all sorts of assumptions about them, but I don’t want that understanding to squash them into polite little boxes where they’re afraid to say anything unpleasant, ever, either.

It’s complicated. Really—I’m over 14, so I can say this—it kind of sucks.

Where do you stand on the language your kids are allowed to use? Have your rules changed for older kids?