Twitter Facebook Pin It Email Article
Prev College Textbooks: Saving Money and Your Sanity Next Girls on Their Way to Changing the World 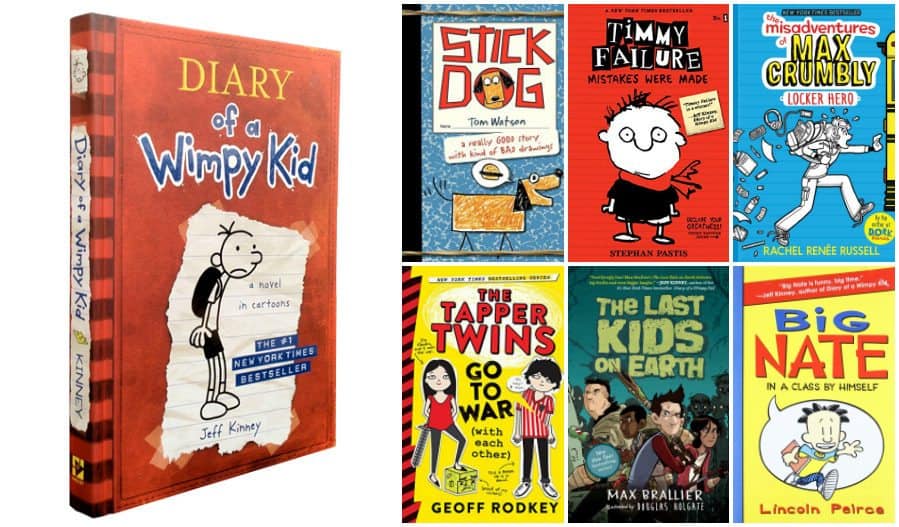 If your child is a fan of Jeff Kinney’s Diary of a Wimpy Kid, how many times have they re-read the books? In my house, I think it’s fair to say each of my two kids is easily on double digits.

My family loves this series. They are funny with a lot of smart, wry humor.  See, in addition to being a mom of two tweens, I’m also a children’s librarian, and as such appreciate the series for its merits. I can see why it’s a huge hit with kids. With plenty of illustrations and sparsely typed writing, the series is easy to digest and makes for a quick read.  They are perfect for the reader who is moving towards chapter books, but is disappointed at how few pictures chapter books have and how many words exist on one page (cruel and torturous!).

But what happens when it’s time for our children to move on and read something else?  Especially if they don’t naturally gravitate to books? As a librarian, I am often tasked with that challenge by other parents. That’s when we try to find them what is called a “read-alike.,”  It’s just what it sounds like, a book that captures the appeal of why they liked the original book in the first place.

Diary of a Wimpy Kid reaches a large age range, from advanced readers starting in first grade all the way through middle school, so the book recommendations below will reach different age groups.  Some are better for younger readers and some will be more attractive for older readers.  Some follow the diary-esque style of Wimpy Kid with a heavy mix of illustrations and writing, some are more traditional chapter books.  What they all have in common is that they are funny, a bit silly and have plenty of kid- appeal.  Most of the books listed here are also the first of a series, so if your kids enjoy it, there are a few more books to keep your children reading!

A young Andy and Terry live in a wondrous treehouse that is every child’s dream. As they struggle to complete their publishing deadlines, they embark on fantastical adventures. This book will appeal to younger readers because it has large illustrations on each page and no more than a short paragraph of text. (The 13-Story Treehouse is by Andy Griffiths and Terry Denton (Illustrator))

2. Timmy Failure: Mistakes Were Made

Timmy and his sidekick, a 1,200 pound polar bear named Total, open a detective agency.  Like Diary of a Wimpy Kid, the humor in this book is nuanced.  Slapstick appeal for the younger children, but with more nuanced humor for mature readers. You can hand this to your younger reader, but don’t be surprised if an older sibling snatches it up! (Timmy Failure: Mistakes Were Made is by Stephan Pastis)

4. Big Nate: In a Class by Himself

Probably the most obvious read-alike with a similar balance of illustrations and text as Wimpy Kid, Peirce turned his long running comic strip into a similar format of illustrations and prose.  Nate is a sympathetic hero for every smart kid who can’t seem to stay out of trouble at school. (Big Nate: In a Class by Himself is by Lincoln Peirce)

Pranks and smart, fun humor peppered with cow facts (educational!) in The Terrible Two from two of the best contemporary picture book authors.  Although there are illustrations on almost every page, they are smaller and the text is more in the style of traditional chapter books.  This is a great book to bridge readers who are not ready to give up illustrations, but are ready to tackle a slightly more challenging format.  The vocabulary is also a little more challenging. (The Terrible Two is by Jory John, Mac Barnett, and Kevin Cornell (Illustrator))

Same cartoon/prose formula with a “dorky” yet likable character navigating middle school.  Even though the character is in 8th grade, he doesn’t seem any more mature than his average elementary school reader.  This book will appeal to a wide range of kids, from about 3rd grade to 6th grade. (The Misadventures of Max Crumbly: Locker Hero is by Rachel Renée Russell)

7. The Last Kids on Earth

The Last Kids on Earth is like The Walking Dead for kids, but nightmare-free and filled with laughs.  An unlikely group of students band together as they fight the monsters and zombies, turning survival into video game-esque challenges. Some pages are all illustrations, while others are mostly text.  Like most of these books, this will appeal to a diverse age range. (The Last Kids on Earth by Max Brallier)

The Dork Diaries will likely appeal more to girls and it does skew a little older as well due to the vocabulary and themes (romantic crushes).  The characters and topics are on the shallow side, but if your child doesn’t get much pleasure out of reading, this will be a fast, fun book. (Dork Diaries: Tales From a Not-So-Fabulous Life is by Rachel Renée Russell)

9. The Popularity Papers: Research for the Social Improvement and General Betterment of Lydia Goldblatt & Julie Graham-Chang

The Popularity Papers gives each girl a distinct voice as they pass their notebooks back and forth documenting their quest to be popular. Unlike Dork Diaries, this is a more realistic take on tween life and Lydia, Julie, their families, and friends are extremely likable.  The format is a little different, which could be a little daunting for the younger reader.  Although most pages have plenty of illustrations, when it is all text it is a mishmosh of two different voices and writing styles.  It can be hard to follow if a child is used to following things in a traditional visual order.  Also, one of the handwriting styles is cursive, which could be a challenge among children that have yet to learn it, but I encourage everyone to give it a try.  It’s effort that is well-rewarded. (The Popularity Papers: Research for the Social Improvement and General Betterment of Lydia Goldblatt & Julie Graham-Chang is by Amy Ignatow)

If the author’s name sounds familiar, you might be more familiar with him as an adult mystery writer.  Pictures are minimal in this book, so visually, this could be a hard sell for younger children.  The topic will be a draw for any child that loved Dav Pilkey’s Captain Underpants, but is ready to move on to a more challenging book. (Doctor Proctor’s Fart Powder by Jo Nesbø)

With James Patterson’s books, we start moving in to more traditional chapter books. There are still illustrations, but less frequent and not a regular part of the story.  James Patterson is one of those authors that has made it a personal mission to get kids reading, especially reluctant readers.  His books are funny and relatable and his characters develop a little bit of maturity and self-awareness by the end of the book.  Find James Patterson’s kids’ series here: the Middle School series, I Funny series, Treasure Hunters series, and Jacky Ha Ha.

15. The Tapper Twins Go To War (with each other)

Told in alternating voices with pictures and other documentation interspersed, twins Reese and Claudia’s sibling rivalry and exasperation with each other is authentically hilarious, even if your reader can’t personally relate to siblings going all-out war on each other. Hand this book to a slightly more mature reader.  The font, visual style, and the maturity of the characters will appeal more to readers that are ready for a departure from the diary-esque style of Wimpy Kid. (The Tapper Twins Go To War (with each other) is by Geoff Rodkey)

A main character who dreads his summer reading list makes this book perfect for reluctant readers who identify with the frustrations of being forced to read for school.  It’s an engaging and quick-paced book featuring a decade old mystery and creative vocabulary building illustrations that will be a hit with slightly older, reluctant readers. (My Life as a Book is by Janet Tashjian)

17. The Strange Case of Origami Yoda

The sage wisdom of Star Wars’ Yoda comes to life in this unique story of a finger puppet that may be more than it seems for a bunch of 6th grade students.  Funny, wise, and I guarantee kids will try to make their own origami Yodas (instructions included).  Each page is peppered with small illustrations, so this is a great book for a child that is ready to move towards less pictures, even if they think they are not. (The Strange Case of Origami Yoda is by Tom Angleberger)

Robin Rockman is a mom to two tweens and a Youth Services Librarian in northern New Jersey. Glitter is her favorite craft medium and her talent is doing “Head, Sho...

Robin Rockman is a mom to two tweens and a Youth Services Librarian in northern New Jersey. Glitter is her favorite craft medium and her talent is doing “Head, Shoulders, Knees, and Toes” at warp-speed. She believes books can help make the world a better place and that there is nothing more magical than a strong public library.