Twitter Facebook Pin It Email Article
Prev My Kid is Ready for Sleepaway Camp. But I’m Not. Next How To Find One-on-One Time with Your Kids 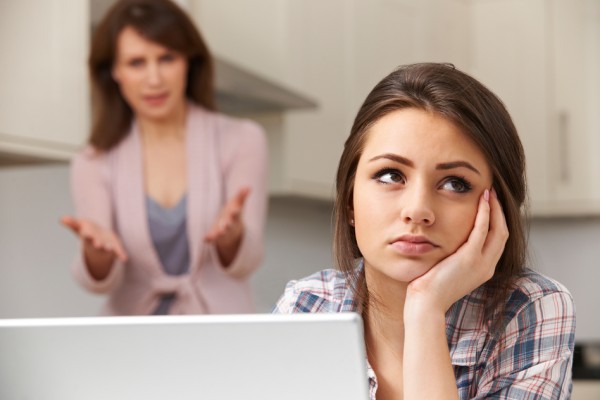 Confessions of a Recovering Naggy McNaggerson

I know that nagging is not flattering, is rarely helpful, and tends to make everyone really cranky. I know that my teenagers—darlings that they are—are sometimes less likely to accomplish the things I beseech them to do if I nag them about it. I know all of this. And yet… there is a light side and a dark side to the universe, and as a mother, if I see the light fading, I nag. (Also if I see clothing on the floor, dirty dishes in the bedrooms, etc. Details.)

My Nag-o-Meter is further complicated by the fact that love may mean never having to say you’re sorry (that’s a stupid expression; love means being willing to say sorry, I think), but ADHD means never remembering stuff that doesn’t matter to you… stuff like clothing on the floor and dirty dishes in your bedroom. My daughter takes medication for her ADHD and it’s very helpful, but the bulk of the time I get to spend with her—or, more accurately, around her—is in the evenings when her meds have worn off. Hooboy. I will ask her to do something and she’ll say okay and an hour later that thing is still not done. She’s not being defiant or anything, it’s just how her brain works (or, y’know, doesn’t). Years of constant reminders about matters both big and small have bled into a habit of repeating and repeating and repeating and… I am probably lucky she hasn’t stabbed me in my sleep by now.

Well, guess what—that child of mine is almost 18. Nearly an adult. And whether you accept 18 as the arbitrary entrance to adulthood or not, there’s no disputing that in a few short months she’s moving out of my house and heading off to survive college without me there to harass her about everything she should be doing. She’ll be fine, but this whole year has been an exercise in shutting myself up (with varying degrees of success, if I’m being totally honest).

We started last summer, with her college visit planning, and later, her applications. I backed off and let her handle it all. It was clear that this was both exhilarating and terrifying for her, which was just as it should’ve been. From there, I backed away sometimes with a proclamation, sometimes more subtly. “You will now handle your own laundry with no reminders and if you run out of clothing, too bad so sad.” (Let’s just say that her brother is a little more fastidious, and also easy to bribe. Someone had been enjoying laundry service for a while.) A few well-placed emails let key folks know that I was removing myself from various conversations/planning, and she was in charge of her own stuff. I have been measured and deliberate. I have reminded myself that she can handle these things, and I need to give her the space to do so, and better all-around for her to encounter some failure while still at home with her safety net than to embark on independence after she moves.

So far, so good. Mostly.

The problem? It’s not her. It’s me. I’m perfectly okay letting her schedule her own doctors’ appointments or work out her class schedule for next year or handle everything at school right now completely on her own. The big stuff, y’know—I’ve handed it over and manage to keep my comments to a minimum. But the little things. It turns out that recovering from a lifetime of dedicated nagging is hard.

If you have a kid with ADHD, I bet this scenario sounds familiar: Despite numerous alarm clocks and backup plans (the truth is that her brother gets her up nearly every school day) and routines and reminders, my daughter is late getting out the door just about every morning. This is not a surprise. This is not unexpected. And yet, here I am in the middle of it, frustrated and annoying, barking, “You’re late! Go! Get out of my house. Brush your hair when you get there, just go!”

By the time the kids leave, everyone is stressed out and grumpy, and the reality is that there is nothing I can say that’s going to make her move any faster. Nagging doesn’t help. It makes us both angry and accomplishes nothing. Why do I do it? Because old habits die hard.

Similarly, there has been a basket of clean laundry sitting just inside the door to my daughter’s room for several weeks, now. I’ve asked her to put her clothing away and return the basket countless times. Every time I ask, she rolls her eyes and huffs, “I will,” and we glare at each other because I don’t understand why she won’t just do it and she doesn’t understand why I won’t just stop asking. Now, if she was 10, maybe this would be a matter of teaching good habits and cooperation and discipline, but she’s nearly 18. Really, am I going to convince her to become tidy with my words at this stage? Am I going to give her a consequence for non-compliance when this is something happening in her room that doesn’t affect me? Honestly, I just had an epiphany about the laundry. And that epiphany was: Mir, stop. You’re being ridiculous.

As my daughter raced around at the last minute this morning, collecting her things and looking for her shoes (dear lord if you just put them where they belonged they’d be easier to find I thought, but I didn’t say it), I asked her—in my mildest tone—if she’d bothered putting that laundry away, yet. “Nope,” she said, “but I did move the basket so you can’t see it, anymore.”

So that’s… progress? I think it is.

As for me, I’m going to try very hard not to ask about it again. I’m making progress, too.