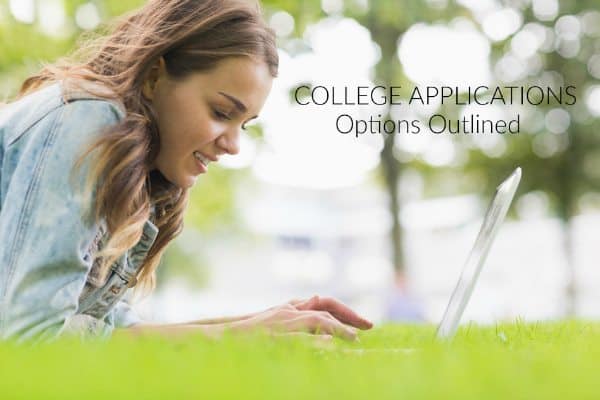 Today I’m going to lay some college application numbers science on you, and by “science” I mean “purely anecdotal and not at all scientific stuff generously overlaid with my own opinion.” That’s cool, right? Right. (Hey, what I lack in scientific rigor I make up for with honesty.)

Before we get to that, though, we have to have a little bit of real talk about College Application Season. That season is now, as anyone with a high school senior knows. If you have a senior planning to attend college next year, you’re likely hip-deep in this nonsense already, and if you’re not, it’s only because your constant exhortations to your teen to get moving are falling on deaf (or, more likely, earbud-filled) ears. There are four terms to know when it comes to college application deadlines and rules:

What is Early Decision?

Early Decision is a binding application process to a single school, ahead of the normal schedule. You are often asked to sign a statement that the school in question is the only school to which you’ve given such an application, and furthermore that this school is your top choice and if accepted, barring financial hardship or world disaster, you are committing to attend. Early decision makes sense only if your child is absolutely certain that this school is their top choice, world without end, amen. And even though it’s supposedly binding, we all know that between FAFSA and the way colleges calculate what a family can afford, it’s entirely possible that their idea of “afford” and reality may not meet. (In other words: this option isn’t truly binding unless they offer you a full scholarship and you decide to try to turn it down. You can pretty much always claim that you can’t afford it, otherwise.) This is a good option for anyone who’s had their heart set on a certain school for years to which they are likely to gain acceptance (more on that in a second), although not all institutions offer it.

What is Early Action?

Early Action is a non-binding application process to as many schools as you like, ahead of the normal schedule. Basically you are saying, “Hey, you’re high on my dance card! Let’s see if we have a match before everyone else gets here!” Being accepted via early action carries no obligation, and this process may be a good option for those who are highly organized and/or those who want to get past the waiting-to-hear period as soon as possible. In addition, some schools have specific scholarship consideration which begins quite early, and therefore is (by design or not) limited to those who applied and were accepted early. Most institutions offer this option.

Deadlines for Early Decision and Early Action vary by school, but they may be as early as October 15th or as late as December 1st. Another benefit of these programs is that they usually have a guaranteed response date (and that date is much earlier, obviously, than for “regular” applications).

Note: So far early decision and early action sound awesome, right? They are, kind of—be aware, however, that there are three options when you apply this way. Your application may be accepted (hooray!), deferred (don’t panic; you’ll be considered along with the regular application pool, later), or rejected (boo). Once you’ve applied and received a response, you cannot apply again for the same year. That means, in practical terms, you may want to think twice about these early applications if the school in question is a huge stretch for you, because early applications typically come from the best and the brightest, and if you’re a real outlier by comparison, you may find yourself with an early rejection instead of a outside shot if you applied later. And if that wasn’t all as clear as mud, know that some schools also offer a fourth option—delayed admittance. In some cases, “borderline” admits will be allowed to enroll in the spring semester rather than in the fall (this is typical at large universities, and allows them to “fill in” after some early attrition while giving not-quite-top students a chance).

What is considered Regular Admission?

Regular Admission is exactly what it sounds like—application by a given deadline to be considered alongside everyone else, with no commitment. A regular deadline is usually somewhere between February and April, but this can also vary by school. You don’t get any sort of special consideration, you may not have a guaranteed response date (or it may be something like May 1, which may as well be sometime in 2058 to a nervous graduating high school senior), and it definitely allows you a lot more time to assure your parents you’re totally working on your applications while you’re Snapchatting pictures of your dog to your friends. If you’re not sure where you really want to go to school, and/or if you’re applying to a wide variety of schools, this is probably the way to go.

What does Rolling Admission mean?

Rolling Admission is also what it sounds like—there is no hard deadline for admission, and applications are reviewed as they arrive. Not all schools offer this option, and it has its pros and cons. On the upside, you can apply whenever! Like, you can apply once you realize everyone else has already gotten into college and you haven’t done any applications! Also, rolling admissions typically have a quick response time (around two weeks). But the downside is that rolling review can mean all available slots are filled (and maybe even filled with candidates not as good as you) by the time you apply.

Now that we’ve clarified all of that, here’s the science portion: While the College Board suggests that 5-8 college applications should be plenty, it turns out that many high school seniors are applying to a dozen schools or more. As a lifelong cheapskate, even with the advent of the Common App (which can reduce work and costs), the idea of that many applications and associated fees made my head swim. So I did a quick survey amongst some of my and my senior’s peers to get a sense of what was really happening.

1) Lower-income students continue to apply to very few schools, even if they’re ambitious, and even if their schools offer fee waivers.
2) Students who have a very good sense of what they want to study and who’ve done some college tours and have parents who are not freaking out about college tend to apply in the 5-7 schools range, although most of them take advantage of Early Action with a couple of schools.
3) Students who are unsure of their goals, and/or who have parents who emphasize going to a “great” school, and/or who don’t blanche at the cost of applications are applying to upwards of 20 schools and don’t think that’s weird at all. (Spoiler: I think that’s completely insane. Sorry.)
4) The apply-to-all-the-schools mentality is more likely to be contagious in affluent areas and high-achieving school populations. (In other news: water is wet.)
5) Seniors caught up in this more-is-better mentality are stressed out, confused, and exhausted.

You don’t have to be a statistical genius to understand that the “oh no, top schools are taking fewer students than ever before!” hysteria is a numbers game. Are they taking a smaller percentage of applicants than ever before? Yes. Are more people applying than ever before? Also yes. So is it really harder to get into Harvard now than it was 20 years ago? I don’t know for sure, but maybe the more relevant question is do you really want to go to Harvard for some reason other than that, y’know, it’s Harvard? (This is not to bash on Harvard or any other “top” school. This is merely to challenge the notion that there are certain “best” schools.) There are benefits to the “best” schools, sure. There are also benefits to supposedly lesser schools, chief among them things like less pressure and a greater chance of financial aid as a top performer at a good school rather than as a good performer at a top school.

Questions college applicants should ask themselves

Here’s my challenge to those staring down the barrel of these applications; start by answering these questions:

It is my strong suspicion that anyone who’s able to answer these questions doesn’t end up needing to apply to 20+ schools and fending off panic attacks, but I could be wrong.