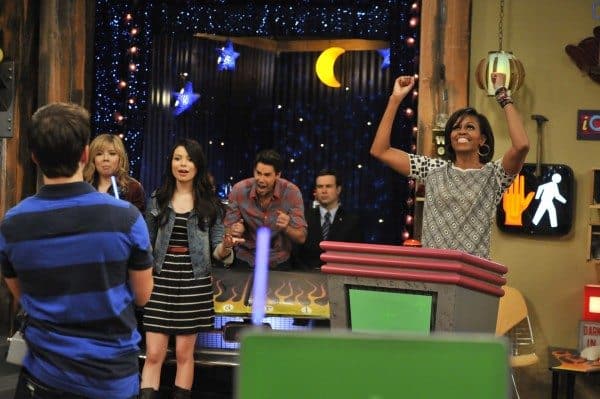 Must List: Watch “iMeet The First Lady” episode of iCarly

My son was so excited that the First Lady Michelle Obama who guest starred on iCarly.  In the lead up he’d been seeing promos for it and couldn’t wait.  So, when we were able to watch a special screening online he was ecstatic. He still watched it on the bigger screen when it finally aired.  He just can’t get enough of iCarly. I couldn’t get enough of Mrs. Obama.

This episode was a tribute to military families as it centered around the First Lady Obama– who along with her daughters are fans of the show– coming to visit Carly to thank her for being a supportive daughter to her dad who is stationed overseas. Carly and the gang put on an impromptu iBirthday broadcast for her dad who couldn’t make it home from his deployment in time for the in-person birthday bash Carly and Spencer had planned.  The first family caught the birthday broadcast, which prompted her visit.

My favorite dialougue from the show, delivered during an exchange when the gang thinks they’re in trouble with the government for their iBirthday broadcast, which hacked into a military base computer system:

Gov’t Agent: “There’s someone in here who wants to see you. Someone very high up in the US government.”
Sam: “Oh, who The President?” (mockingly)
Gov’t Agent: “Higher.”

Opens the door to see Spencer and the First Lady chatting it up on the couch eating spaghetti tacos!

Yeah, First Lady Michelle Obama was awesome on the show, and a great sport dancing and joking away. As an added bonus there was a first-time cameo appearance by iCarly series creator and executive producer Dan Schneider as a Secret Service agent (fun!).

THe “Higher” line was my favorite too! And you know iCarly is officially a phenomenon when the first lady is on!