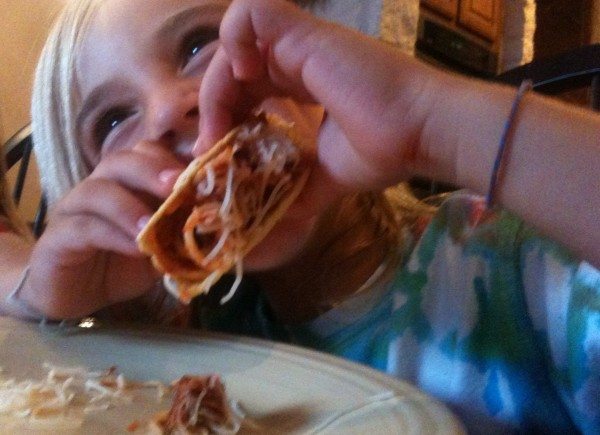 Anyone who has tweenage children is not surprised by the mention of Spaghetti Tacos.  Chances are your own children have asked you to make this culinary delight. I am willing to bet you can recite the episodes of iCarly verbatim with me. I am also willing to bet that you prefer this show over many of the other offerings for this age group on tv.  Or am I the only one when faced with yet another episode of Big Time Rush has the overwhelming desire to big-time-rush over the tv and Hulk-Smash it?

Spaghetti Tacos, something that sounds delicious if you are a tween.  A fusion of the best foods, according to one of my children.

After much begging and pleading I decided to make them for the kids.  They couldn’t believe it when I told them.  “Are you joking?”  “Seriously?  You are going to make spaghetti tacos?” They asked these questions like I had said we won a million dollars and a puppy.  They called and texted their friends.  Spaghetti Tacos!  They had won the kid meal lottery.

So, how did I make them?  It really is as easy as you might think, ranking right after Raman noodles on the scale of difficulty.

How to Make Spaghetti Tacos

Ingredients you will need

1. Brown the ground beef in a large skillet.  Add the jar of sauce and let it simmer.

2. Meanwhile, boil your water in your big ol’ stockpot.  I broke my spaghetti in half before tossing it into the boiling water with the hopes that it would make the later taco assembling and eating less messy.  Italians everywhere want to revoke my Italian license.  But I’m not Italian so it’s okay for me to blaspheme the spaghetti.

3. Cook the spaghetti according the instructions on the box.

4. Once it is done cooking and has been drained, return the spaghetti to the stockpot.

5. Pour the sauce/ground beef mixture into the pot and gently mix.  You don’t want to break the spaghetti.  Oh I kid, go ahead and break it, who is going to notice anyway.  Just stir it all up.

6. Heat the taco shells, also according to the instructions on the package.

7. Now this is the tricky part, spoon the spaghetti into the taco shells.

8. Top with the shredded mozzarella cheese.

Stand back in amazement as the children eat it and proclaim it the best thing you have ever made in their entire lives.  Wonder if you should be offended or happy.  Decide on the latter.

“It’s like eating chips and spaghetti at the same time!”

“My two favorite foods mixed together!”

“We can eat with OUR HANDS!”

Shockingly, even the teenagers think it is delicious.  Though it probably shouldn’t be that shocking.  Teenage boys are always so hungry and foraging the refrigerator for food that they have even been seen willingly eating vegetables.

Honestly, the only thing that would have made this meal better in their eyes would be if I could find a way to serve it on a stick.

So, in conclusion, children who shun all sorts of casseroles because DIFFERENT FOODS ARE TOUCHING see nothing wrong about this particular combination.  Now if only Spencer would start cooking some vegetables.