Twitter Facebook Pin It Email Article
Prev The Line in the Sand Next How Important is the Bedtime Routine, Really? 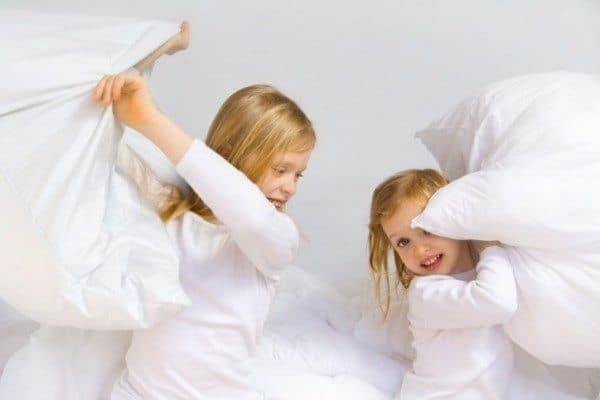 When Should My Toddler Sleep With a Pillow?

Kind of a dumb question, but here goes:

When do you start giving a toddler a pillow in his crib? My son (19 months) has never had a pillow to sleep with, and with as wiggly as he is in bed, I doubt he’d stay on it. But he LUUUUUUVS pretending to sleep with the pillows on our bed. So I wonder if a pillow might be nice for him in his bed?

The “official” recommendation from the Something Something Expert Academy of Associations of Something, is to wait until a child is two years old before letting them sleep with a pillow. However, many pediatricians don’t draw such a hard line, and will sometimes even recommend parents try a pillow if their child is, say, an especially bad bad sleeper or bothered by colds, allergies or chronic ear infections. When I Googled around for that “official” guideline I generally came across articles by an “expert” saying two years…and hundreds of comments from parents saying: Yeah, whatever, my kid’s used a pillow for ages and is JUST FINE.

I believe it’s a similar thing to making the call about letting your older baby sleep on his stomach, or take a lovey and a stuffed toy or two to bed, or covering your toddler with a blanket for the first time — does it still just strike you as unnecessarily risky? Much ado about nothing? How much tossing and turning and twisting does your child do vs. someone else’s child? Where’s the sweet spot between common sense and paranoia?

My oldest son, Noah, never slept with a pillow until we moved him to the big boy bed — definitely past his second birthday. And even then, he didn’t use it. I usually found him curled up on a far corner of his more-spacious mattress with his little butt in the air and his head directly on the sheet. After a few months the whole tucking-in thing clicked and he slept on the pillow and under the covers. He also was never a baby who cared about soft stuffed toys or blankets in his crib — the only thing he liked us to put him to bed with was a selection of board books he could entertain himself with in the morning.

My middle son, Ezra, on the other hand, sleeps with an assortment of loveys that would probably make some people cringe. He NEEDS them. He WANTS them. He will conduct roll call before bed in case I dare remove one. Right now he needs his Taggies blanket, his Taggies ball, his LeapFrog My Pal Scout (set to the “10 minutes of bedtime music!” setting), his glowing seahorse (Update on 3/1/14: watch this news report about potential safety hazards for this toy) AND yet another Taggies product, a small fleecy rectangular “puzzle.”

That he immediately flips over and uses as…you guessed it: a pillow.

Right now that suits him just fine, though I also catch him trying to “sleep” on Noah’s pillows or our pillows or his stupid blasted infernal Pillow Pet. But he doesn’t need them to sleep for real, in his crib, so I don’t feel a need to introduce anything else to the bedtime company. We’re right on the fence about a big boy bed — he’s managed to get out of his crib once now, but never attempted it again — though when we do move him, I will probably include a pillow.

HOWEVER, it probably won’t be a full-sized squishy pillow, or something with feathers that could trigger allergies. It will probably be something more like an airline pillow. Just search around for “travel pillows” and you can find nice firm options with additional covers. (Though stay away from ones with suspect filler, like “microbeads” or scented potpourri garbage. Basically anything you DON’T want your child to have in the event of the pillow ripping or splitting open.) Even a small decorative throw pillow with a basic hand-sewn cover made out of an old receiving blanket or crib sheet would work — and even be a nice combination of pillow and lovey for a kid who is having a tough time with the transition to a “real” bed.