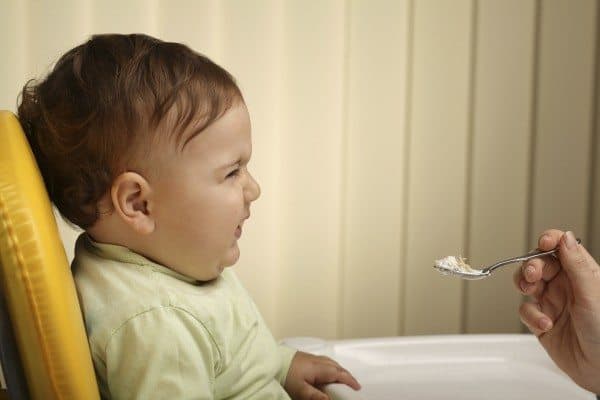 I have breastfed my daughter since she was born. Until about five months old she would drink from a bottle if needed. We started a few basic foods – cereal, etc.  Then she went on strike.  Now she is nine months old and will.not.eat. At all.  She likes milk from the boob and that is it. We even tried me leaving for about 8 hours and she had plenty of options (baby food, bottles, sippy cups). Instead she screamed until she threw up. Repeatedly. She refused to have anything and it took forever to calm her down when I got home. Any suggestions other than “keep offering her foods and watch as even the sight or smell of anything resembling edible stuff makes her gag, choke, and puke on us?” How long can a phase like this last?  If it helps, my husband and I both work from home so we have some flexibility in this.

So I’m guessing a two-part concern is what prompted you to submit this question: Concern #1: Is my baby getting enough nutrition without solid foods, and Concern #2: OH MY GOD MAMA NEEDS A DAMN BREAK, PLEASE EAT SOMETHING ELSE.

Let me get concern #1 out of the way first, because frankly, it’s the easier one. Please don’t worry that your baby isn’t getting enough to eat or that she NEEDS to be eating solids by this point in order to gain the right amount of weight or develop properly or anything like that. Before 12 months, breastmilk really is enough, and solids are for “practice” or “fun.” As long your pediatrician isn’t expressing concerns about her weight, her milk-from-the-boob-only preference is not a problem. (And it isn’t even that unusual at her age, really.) An infants’ multivitamin is a good idea, if she’s not already on one (exclusively breastfed infants can become deficient in Vitamin D), and make sure YOU’RE getting proper nutrition from a well-balanced diet and prenatal vitamins.

End the blah-blah-nutritional-talky-speak. Onto concern #2, which is that you probably (and completely understandably) would like to NOT be your daughter’s sole source of food and calories and nutrition and all that. But…unfortunately I’m gonna have to say that your daughter is fully in charge here, and I’d suggest tabling the whole bottle/solids thing for the most part, for now. Take a deep breath and embrace the baby-led weaning — she won’t starve to death in the meantime, and nobody wants a hysterical, vomiting baby all because of some pureed yams, you know? She just…doesn’t sound ready yet. She will be, someday. Maybe next month, or the month after that. Or tomorrow! But you cannot “make” her be ready before she’s ready, even if all the parenting books and email newsletters are all talking about solid foods as if they are a “given” by now.

Let her lead the way and wait until SHE starts expressing an interest, and don’t try to force anything, because she’s clearly made up her mind. Again, FOR NOW. (Babies are notoriously fickle, and sometimes will surprise you by doing the exact thing you were just worried they would never, ever do, usually right after you’ve, say, penned a long and slightly hysterical blog entry about how worried you were.) Remember the thing about solids being “fun” before 12 months old? Your daughter obviously isn’t having any fun. And I’m guessing you and your husband aren’t, either.

So at mealtimes, nurse her beforehand — you’ll be more likely to have success with solids if your daughter ISN’T ragingly hungry or upset, and if foods and sippy cups are presented as interesting “extras” after she’s had the boob. Then go ahead and put her in her high chair while you and your husband sit down to eat, but…ditch the jars of purees and other baby-specific foods and give her some toys or plastic dinnerware/utensils instead. If she seems happy and calm and appears to be watching you eat with any sort of interest, give her something right off your plate, preferably something she can pick up herself instead of you having to spoon it in. Just set it on the tray, without comment.

Do not — DO NOT — try to force her to taste anything, either from a spoon or otherwise. If she doesn’t eat, she doesn’t eat. But let it be her choice and her option to pick up food and taste it, and don’t let her sense that you’re stressed about it and don’t go rushing into the kitchen 17 times a meal in search of other food options if she rejects everything or scream and cheer if she does actually stick a macaroni noodle or bite of meatball in her mouth. It’s your job to put the food in front of her. It’s her job to eat it. (The credo of Ellyn Satter’s fantastic How to Get Your Kid to Eat: But Not Too Much. Essential reading for every parent on earth!)

I wish I had similar practical advice re: getting a breastfed baby to accept a bottle or cup, but I admit that I’ve so far been REALLY fortunate and had babies who all went easily from boob to bottle and then bottle to cup from practically day one with very little drama. (Ezra required a bit of experimentation with a bunch of different bottles at one point, but it turned out to be a short-lived phase…which ended almost IMMEDIATELY after I purchased a bunch of new and very expensive boob-shaped bottles and he suddenly went from being incredibly picky to drinking out of just about any damn thing with a nipple you shoved at him.) But I’m hoping the comments section will be able to plug that hole in my knowledge and offer you some tips about how to get her to accept pumped milk in a bottle and possibly get the chance to OCCASIONALLY LEAVE THE HOUSE without the fear of your baby going on a hunger strike in the meantime.

Some babies just don’t ever take to bottles, unfortunately, but try not to let your frustration over that bleed into the WHY WON’T SHE EAT RICE CEREAL ARRRRGHHHH situation. Yes, it’s a pain, but you’re simply gonna have to figure out how to out-zen your baby in this case and not let her sense your frustration. Food-related frustrations have defeated many, many parents before you, and we’ve all found ourselves unwittingly locked in a battle of wills that WE WILL NEVER WIN with our babies, toddlers and big kids. I’m sorry you’re getting a head start on it, but look at it this way: By the time she’s two-and-a-half and decides randomly that she wants to eat nothing in the world except bananas and cupcake frosting*, you’ll be totally ready for it, and will be able to shake it off with a shrug and an eyeroll.

(One last thing: I feel weird mentioning this, because I don’t want to suddenly sound like I’m changing directions and making you worry after I just went on and on about how NORMAL your daughter’s behavior is…but do go ahead and mention how “the sight or smell of anything resembling edible stuff makes her gag, choke, and puke” to your pediatrician. Since she’s been such a successful nurser, I’m hesitant to even put the possibility of oral motor problems out there and I really do think this is more of a case of “she’s not ready and you guys are maybe forcing the issue too much, so back off and her stress level about foods will normalize on its own.” But! If she really does seem to be having physical, actual problems swallowing or tolerating textures, your pediatrician might recommend having an evaluation done with a feeding specialist or occupational therapist or something.)