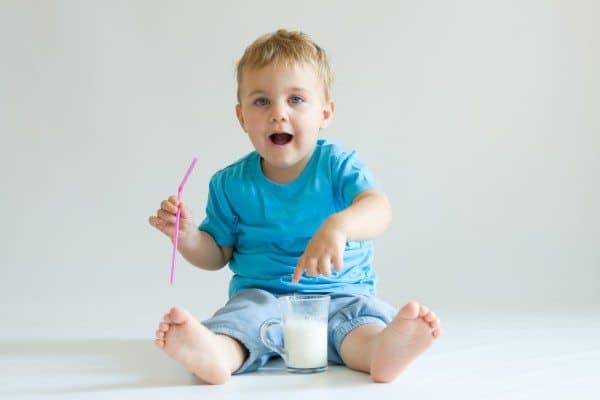 From Breastmilk to Milk

So my baby is almost 1, OMG! I’ve been exclusively breastfeeding this whole first year…but I’m tired of pumping. I’m down to pumping once a day at work, and nursing in the morning and evening. I’m not getting enough supply during my pumping to keep up with her milk needs at daycare and my freezer supply is almost out! I’m freaking out about what to do once I can’t keep up anymore. Cow’s milk? Soy milk? Some other latest greatest idea, kefir? What do I give her next? I’ve read a bit into both, and I haven’t come across anything that screams THIS IS THE RIGHT CHOICE! Maybe I’m giving it too much thought, but I feel like after giving her breast milk for this long I’m going to taint her with something else. HELP!

First of all, a heart congratulations and heartfelt FISTBUMP on breastfeeding exclusively for so long.

Second of all, yes. You’re totally overthinking this, but I do understand why. Please though, for your own future long-term sanity as a mother, try to steer yourself away, FAR FAR AWAY, from the “I will taint or damage my daughter if I ever let anything less-than-optimal pass her lips” thing. Trust me, that line of thinking is a one-way street to McNeuroticVille, with a side of annoying everybody else, and will probably result you spending a ton of time and money on things that may only offer a slight nutritional benefit over something else, but meanwhile your brain is all KERFFFLLLBBTTTZZZ, so what’s the point?

Kids live and eat in the real world, and our cozy time of controlling every nutritional choice for them is shockingly short. I’m certainly not saying we should make the most of that time and make the very best choices and try to instill good food preferences and habits, but if this is the way you’re approaching the choice of MILK…well. I just…don’t want you to like, self-destruct when you see the spread at your average toddler birthday party, or when your daughter decides to go on a month-long food strike and will only eat peanut-butter crackers.

What’s important here, about the choice of milk, are three things:

It’s also important to remember that:

1) Milk IS NOT the same as what breastmilk was to your daughter for her first six months or more of life.

It is, at this point, a BEVERAGE. Yes, it’s full of protein and calcium and vitamins, but it (cow’s, soy, whatever) should not ever be a baby’s be-all end-all diet component. It can be constipating, for one, and fill up a baby’s tummy so they will eat less solid food, which, at a year, should be your focus: Getting your daughter to taste and explore a wide variety of foods and textures and nutrition sources. NOT bottles of liquid, no matter how great the liquid may be.

(Ask your pediatrician too: Mine recommended keeping my boys’ milk intake to about 16-24 ounces a day. Eight ounces at meals, basically. Your doctor might have a different preference, though.)

Personally, and I’ve written about this before: I am extremely anti-soy milk for young children, especially for young children who don’t have a problem with cow’s milk. Unless you find that your daughter is allergic (though I imagine you’d probably know or suspect by now), I would suggest not giving her soy on a regular, high-intake basis.

My children drink whole milk — organic, no growth hormones — and have been drinking that since they were around your daughter’s age. (A lot of kids Noah’s age will switch to 2%, but he’s so stubbornly skinny that our doctor prefers he stick with whole.) Sometimes we’ll get the DHA-fortified stuff, sometimes we buy the not-super-pasteurized awesome creamy stuff at the farmer’s market. Sometimes we just run to the closest grocery store for whatever organic variety they offer because HOLY CRAP DO WE EVER GO THROUGH A LOT OF MILK. They love milk. They are crazy about milk. They would drink twice as much of it if I would let them. That’s why I have to laugh at the idea of purposely going with some teeny little specialty product as our primary milk source.

That said, there’s no reason why you can’t give her cow’s milk and something else. Give her a goat’s milk yogurt smoothie instead of whole milk for breakfast sometime, if you feel like it. Try making your own kefir (I hear it’s stupid easy, and you can get the starter kits online) and see if that satisfies some inner nutritional hippie vibe. But repeat after me: It’s not a life force, it’s just a beverage.

I feel like we’ve made things so hard on ourselves sometimes: We’re doing GOOD things by questioning “experts” and traditional wisdom and doing our own research…but we’re also driving ourselves a little crazy in the meantime, with the fear of doing something “wrong” or “NOT THE VERY VERY UTMOST BEST” about things that probably don’t deserve that much of our headspace. Put the pump down and give her some milk, if you want. You do know best; you just need to trust yourself and your common sense a little bit.