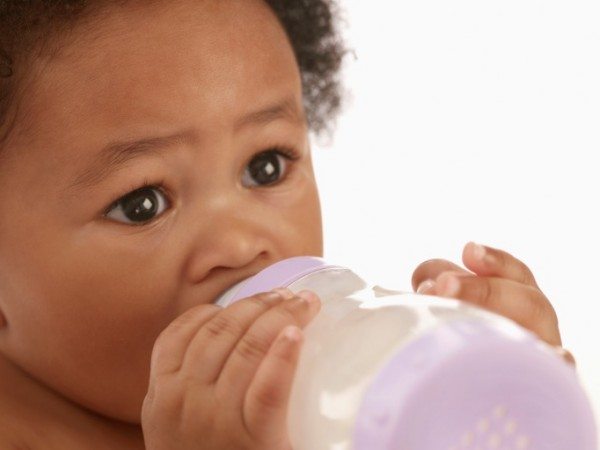 I absolutely love reading all your columns. They make me happy. When I realized that I was letting myself slide, exclusively wearing yoga pants after my babies were born, you and Laura Bennett inspired me to not let myself go.

However, my question is about babies. My son is almost six months old now (wow, the time goes fast). Ever since I went back to work, I’ve had to supplement my milk supply with formula. I’m OK with using formula, since I’m not as neurotic as I was with my first child. I’ve also started to read The Unhealthy Truth, and it’s been an eye opener. My problem is soy in baby formula. I can’t seem to find a brand without soy in the ingredient list. Even the organic brands have soy. Currently, I’m using the Target generic brand which seems to have the same ingredients as Similac.

Please help! This is making me crazy especially since I’m having to use formula more and more as I seem to be drying up.

For anyone wondering what the deal is with soy: From an environmental standpoint, the soybean industry is pretty much just as destructive (if not more) as corn. And BP. Probably combined. The single-crop farming process is destroying usable land, so hey! It’s okay! We’ll just flatten 10,000 square miles of rainforest and everything will be FINE. Here in the U.S., two-thirds of the soybean crop has been genetically engineered to withstand heavy doses of pesticides, and it’s generally a very, VERY highly-processed ingredient. Frankenfood! My favorite! From a health standpoint, soy has fallen from grace as some sort of super health food and some very scary safety concerns have been raised — particularly when it comes to infants and soy-based formulas and possible estrogenic effects and risks of future allergies and just…GAH. All sorts of terrifying crap. Some say the warnings are overblown (one critic I read once said giving a baby soy formula was like feeding them birth control pills at every feeding) and there’s no need to toss out the tofu and edamame from our diets. But just about everybody admits that more research is needed before we know for sure. In the meantime, use soy in careful, measured moderation, particularly with babies and young children.

For me, the mere presence of some soy-based oil in milk-based baby formula more than met my personal comfort level for moderation. Ezra got the occasional bottle of formula once my supply dipped to a level where I simply couldn’t pump much extra. I gave him organic formula, since that mostly removes the concerns about genetically-engineered soy or growth hormones in the cows.  (I do wish I’d known what I know now when Noah was exclusively drinking formula — I would have switched to an organic version back then, too. All I knew then was that organic formulas tended to be sweeter than regular versions so that’s not really good either OH MY GOD WE CANNOT WIN.)  I’m no fan of “corn syrup solids” either, but a lot of formulas use that too. Eh. I wasn’t feeding him straight soybeans mixed with high-fructose corn syrup or anything, so I just didn’t stress about every.little.thing. on the formula label.

But I completely understand your concern. And hey, if there’s a formula option that gives you better peace of mind than the one you’re using now? Let’s find it.

Funny thing: If you Google soy-free infant formulas, you’ll mostly find that the major brands are missing a huuuuge untapped market, because parents WANT THIS. They’re looking for it. They’re frustrated because it’s apparently available in the U.K. and parts of Europe, but not here. A lot of parents are switching to uber-expensive goat milk formulas or even making their own.

I found quite a few suggestions that parents try the hypoallergenic formulas, like Neocate or Enfamil Nutramigen — the ones for babies with severe allergies or digestive problems. But when I pulled up the ingredient lists, soy oil was still there, in pretty much the same amount (and in a couple cases, more) as the “regular” (and cheaper!) formulas. I thought I’d hit upon a winner with Baby’s Only Organic Lactose-Free Formula, which “is intended for babies who are lactose intolerant and offers an alternative to parents who wish to avoid soy protein in their baby’s diet.” Hooray! Except then I noticed the little asterisk at the end of that sentence, and the fine print at the bottom of the page: Baby’s Only Organic Lactose Free formula contains organic soybean oil and organic soy lecithin derived from organic soybean oil.

So. No. There doesn’t appear to be a widely-available commercial formula here in the U.S. that is 100% free of all soybean products. At least not yet. I don’t think that the amount of soy oils in most formulas are dangerous or going to cause significant harm or are anything to really obsess about, especially if you opt for an organic version without genetically-modified, earth-destroying ingredients. If your baby had a dairy allergy, then yeah…I’d probably be a bit more worked up on your behalf because there’s NO WAY I’d feel comfortable feeding my child soy formula full time (at least not after reading The Omnivore’s Dilemma and The Unhealthy Truth), and I’d be clamoring for more options. (Though that’s when I’d probably order up some of that Baby’s Only Organic.)

We all want to do our very best and make the very best choices for our children. Sometimes it’s an easy switch to avoid a suspect ingredient, and sometimes it takes a little effort. Or even a lot of effort. Sometimes, though, you do need to cut your poor brain a break and admit that you’re doing the best that you can and it’s okay to just go with “good enough.” In this case, I’d say that switching to an organic formula should take care of MOST of your concerns about soy, and that’s more than good enough, in my book.