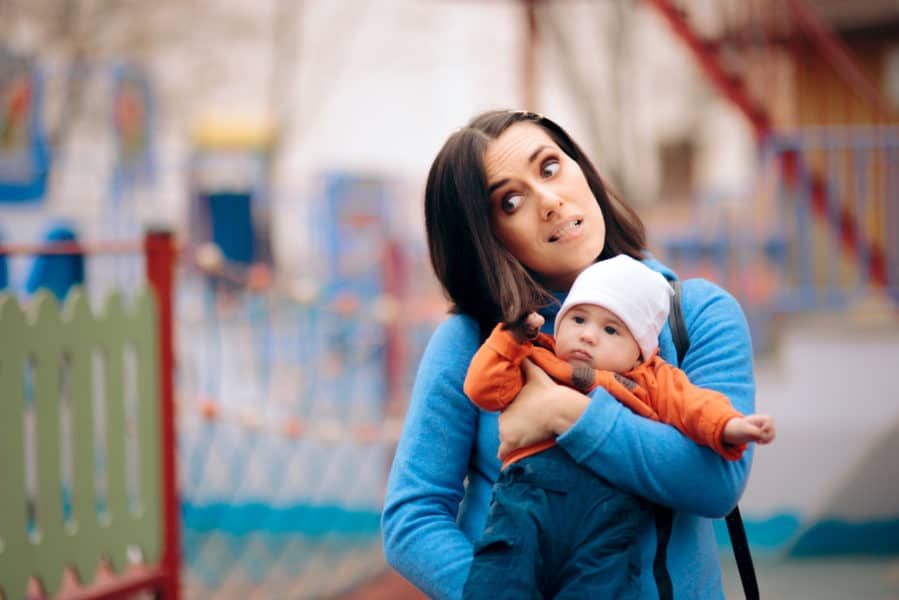 I love your column – Reading your back catalog and pregnancy calendar kept me sane and entertained at work during my first pregnancy, but now that I’ve got almost a year of this parenting thing down I find myself needing some advice.

My baby is 11.5 months old and has entered a hitting and hair-pulling stage with a vengeance.

Sometimes it’s dad, but for the most part, he’s hitting ME and pulling MY hair. Which I don’t love. I’ve been doing the “Ouch! Hitting hurts, we don’t hit” script, but my baby apparently finds this hilarious. I even tried some more scoldy-sounding “No, no! We don’t hit!” which my baby finds even funnier. Putting him down in his room and removing myself from the line of fire doesn’t seem to be working, because is he really understanding that hitting = fun stops if after he hits he just gets to play with these other toys in his room, which he thinks are also fun?

I’ve read some of your articles on hitting and hair-pulling, but they all seem to deal with toddlers. And I think I still have a baby. In those you emphasized that the phase will wind down when the kid learns empathy or more words, so am I going to be getting hit and have my hair pulled for the next year???

My baby has one sign (all done – admittedly the only sign I’ve been consistently working on) and mayyybe a few words (or at least sounds that could be approximated to be words) so I’m going to be waiting a heck of a long time for emotional language and empathy. Please tell me there’s something I can be doing that will get through to him that I don’t want to be hit. Especially because we just found out that a little brother or sister is going to be joining the party later this year.

Thank you so much for your help!
(Am I supposed to think of a funny sign off, or do you that part? It can be signed Punching Bag, since that’s apparently what I am now.)

P.S. I feel like I made my baby sound like a mean hitting monster, when he’s really not. He’s sweet and happy and fun, and very very active. He loves people and only really seems to hit me. 🙁

Yep, yep, you are (unfortunately) totally correct that the “hands are not for hitting/hitting hurts” script you’re using is really meant for older babies and toddlers, and a 11.5 month old is unlikely to have any idea what you’re talking about. Although to be fair, it still takes a million bajillion repetitions at any age, so the fact that it’s not really “working” for you yet is…par for hitting-and-hair-pulling course.

Yes, remove yourself from the situation

And it’s also TOTALLY fine to simply put him down, remove yourself from the line of fire, and let him happily redirect himself! There’s nothing wrong with that! He’s not even a year old yet, so you’re not trying to punish him or put him in a timeout here. You’re just trying to 1) not get hurt or tolerate something unpleasant, and 2) slowly, gently, and gradually introduce him to the idea that hey, Mama doesn’t like that, KNOCK IT OFF. But no, he’s not going to grok that concept yet, not now or for many, many more months. In the meantime, the fact that he isn’t super distraught and remorseful after you set him down post-slapdown doesn’t mean you’re doing something “wrong,” or raising a sociopath. It means he’s still just a baby.

I would probably just drop the whole script part for now, since the fact that he’s laughing means it’s just giving him the cause-and-effect “reaction” that he wants: “I did a thing and Mama said words to me! Awesome! Let’s see if she’ll do it again.” Instead, try to give him ZERO reaction — in your words, your facial expression — and get him off your lap or otherwise away from his chosen body part target without a word. (Although I know, that’s so much easier typed than done, because babies are STRONG and can really pack a scalp-searing whallop when they get a fistful of hair.) If he immediately redirects himself to his toys, great! That’s honestly better, because if he DID react each time with a weeping meltdown, you’d then have actively comfort and redirect him, which means the initial hitting/hair-pulling incident kind of…worked, because he got more of that good, sweet Mama attention in the end.

Try the above combined with some basic self-defense styling. Keep your hair back in a bun or ponytail whenever possible, with any stray tendrils clipped back with barrettes or a headband. (I bought a cute array of wide bandeau-style fabric headbands from Etsy during this phase that made my hair almost completely inaccessible to little fingers.) I also found baby-friendly teething jewelry to be a helpful distraction — instead of pulling/scratching/banging on my face, my babies were happy to yank/chew/fidget on what I had around my neck.

Clear toys that get thrown around

And toys that get used as a Mama-weapon get put away for the rest of the day. Again, he probably won’t get this part yet! He will probably not care or notice in the slightest! That is fine, because at least you know he can’t hit you with that specific pointy plastic piece of garbage again!

Remember… this IS just a phase

A very common, normal, irritating phase. He will likely lose interest in a few weeks, if you’re able to create an effective Zero Reaction-Zero Attention Vortex. It is, unfortunately, a phase that some babies will go through again as older toddlers or even preschoolers, so don’t be surprised if you come across this very column again in your future Googling. (And hopefully, you’ll remain his preferred target vs. his sibling, but hey, we’ve got some columns on that one too.)