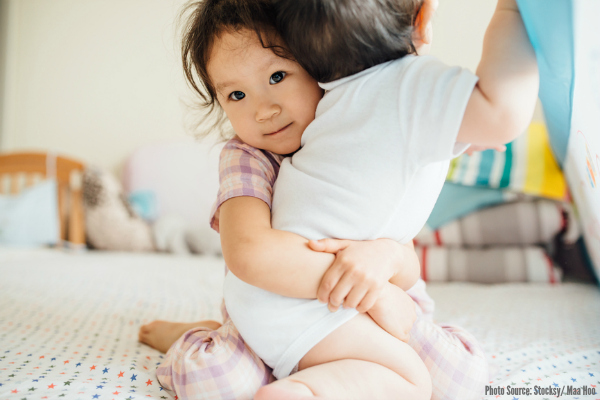 I need some help distinguishing between normal toddler behavior and worrisome behavior. My daughter just turned 3 (and boy, is she good at it!) She has always been a high energy, affectionate child. And most of the time that is still true. But lately, she has become defiant and occasionally aggressive. She will outright defy me when I ask her to do/not do something. This happens probably 1-2 times per day. And sometimes she hits her baby brother. Not hard enough to hurt him (he can sleep through it.) This happens when I tell her something she doesn’t want to hear, like “it’s time for bed” or “no, you can’t have Cheetos for breakfast.” It doesn’t seem like she is trying to hurt him…she seems like she is just overwhelmed by her emotions. She loves her brother and dotes on him usually, and always apologizes, but this behavior is so out of character for her. (And obviously I keep a close eye on the baby to make sure he doesn’t get hurt.)

I know that some of this is normal and that she is testing boundaries. But I want to make sure that I’m not missing something more serious.

As for how we handle this, my husband and I have tried to ignore the tantrums and defiant behavior as long as it’s not dangerous. If she is being disruptive, we calmly take her to her room to “take a break” and ask her to rejoin the family when she is “feeling better.” When she hits, we take her to her room and tell her she can rejoin the family when she can treat everyone nicely.

We have had some big changes around here lately, so I know that could be part of it. I have a 4 month old baby, so she is no longer the baby of the family. I was home for maternity leave, and just went back to work a few weeks ago. Same with my husband – he was off for about 8 weeks then went back to work. And it does seem like these outbursts are worse when she is tired, hungry, etc.

I guess I’m looking for either reassurance that this is all normal and will pass, or someone to tell me that this behavior is a red flag that I need to address further. Sorry this is so choppy and rambly- between the nighttime wake ups with the 4 month old (we’ll save that for another letter!) and worrying about the 3 year old, I’m exhausted and probably not totally coherent.

Okay gang! That’s all the advice I have for today, see you next time.

Just kidding, but seriously. There is not a single “red flag” to be found here. Just a typical toddler mishmash of testing boundaries, poor impulse control, the new sibling regression period, Mom and Dad were home and now they’re not, and also just plain old Being 3 And Good At It.

I totally know how you feel though, and why it can seem so worrisome. After I had my second baby there were literally days when I would look at my oldest (who was also 3) and be like, “oh my God, I have BROKEN MY CHILD.” He was so inexplicably difficult and demanding and defiant in the months after his baby brother (who he also loved!) arrived. And we didn’t even have the whole maternity leave/going back to work upheaval. (Although he did have his dad and grandparents home with him quite a bit, and then they left and WATCH OUT MOM I’M A HANDFUL.)

The “new sibling regression” is usually rooted in attention-seeking behaviors, and most toddlers default to seeking NEGATIVE attention. Because that’ s honestly easier — we get tired or distracted with the new baby we forget to praise them the way we used to, but sure as HELL are going to react when they hit the baby or throw a toy at our head. We give them a big dramatic response and in their minds, this is a win because it’s attention. And they’ll take it because they’re feeling jealous and insecure.

The key is to fight negative attention with positive attention. Praise her when she’s being gentle with the baby. Make a fuss over how nicely she’s sitting at the dinner table or for remembering to put her clothes in the hamper. If she isn’t actively misbehaving, find something positive to focus on and praise her for.

And whenever possible, try to arrange one-on-one time with her (your husband too). Special weekend outings are great — they can be simple like going with Daddy to the grocery store and getting to “help” and pick out something special for herself. You leaving work a little early (or going in late) so you can take her to a playground or out to breakfast while her brother is in childcare. A one-on-one trip to the park, etc. Just little ways to reassure her that she’s still special and deserving of your positive attention.

When the tantrums hit, continue to ignore them. If bedtime or other transitions are a consistent trigger for them, be sure to give her a couple warnings (10 minutes, five) before the abrupt “okay time for bed!” type announcements. When she hits her brother, put your attention on HIM. “Oh, are you okay? Poor baby, etc.” Give the child who got hit the attention and pretty much ignore the child who did the hitting. This will teach her that hitting doesn’t serve her purpose of getting that immediate reaction from you. After lavishing the baby with your attention and concern, you can then enforce consequences. (Believe me, you’ll be using that method for a long time. I still do. Welcome to siblinghood!)

I also suggest changing her time-out venue. Kids’ rooms, in general, aren’t always the best cool-down spots in the house. They’re full of toys and books and visual stimuli. Plus you can inadvertently trigger bedtime issues if you’re using the place where they sleep as a “punishment” during the day. I would try time-outs somewhere she can actually calm herself without a ton of distractions. We usually use the “naughty step” timeout for aggressive stuff like hitting or throwing toys (no more than one minute for each year of their age), and offer a “cool down” spot for the tantrums borne of frustration/tiredness/hunger/thirst. Think a small tent or fort, a hammock swing, one of those chairs from IKEA with the pull-down cover, etc. After she’s calmed down, time permitting, you can join her for some loving, positive attention — read a book, bring her the snack/drink she needed but forgot how to use her words, etc.

Now, if her level of defiance and aggression remains “worrisome” even after a concerted, sustained effort to do everything listed above, and if enough time passes that the daily, ongoing defiance is no longer tethered any big recent changes (like another 6 months)…you CAN consider getting her evaluated for a possible disruptive disorder. Again, I REALLY REALLY don’t think that’s what’s happening here, but as I’m not a developmental expert, I admittedly am not the final word on sussing out normal adjustment issues vs. behavior problems tied to something like Oppositional Defiance Disorder. So if your mom-gut continues to nag that “something else is going on here,” there’s absolutely nothing wrong with finding a child therapist or psychologist (preferably CBT-focused) for a proper evaluation.

Good luck! Just because this is all mostly likely “normal” doesn’t mean that it’s a bunch of puppies and rainbows to deal with on a daily (sleep-deprived) basis. It will pass, and while there are things you can do to “help,” there’s no real reason to get too worked up and worried about it. She’s 3. Someday she will be 4!

(Meanwhile I’m counting down the days until 5, oh my lands.)