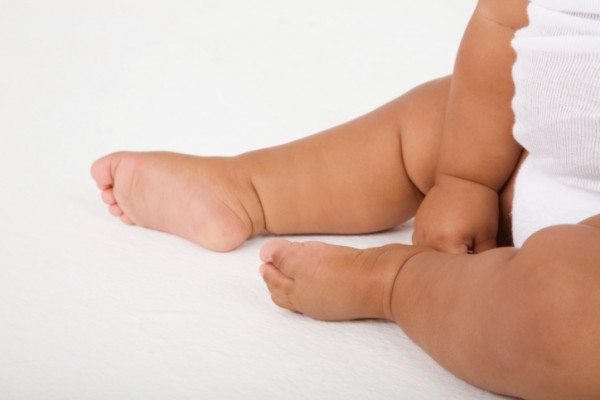 I just can’t read enough of your talk about cloth diapers! I tried cloth diapering last year with my 2 year old and it just didn’t work for us at that time. We tried a bit of everything with him and I loved them. However, after using disposables and enjoying their absorbency, it was just too hard to keep up with my son’s wetting. I wish I had known how cute and easy they were and had started when he was tiny. So, I sold my stash and a couple weeks later found out we were expecting our second baby. Doh! He’s still not potty trained and now I have two kids in diapers.

My problem is this: my 13-pound 3-month old exclusively breastfed baby (EBF) baby is growing out of the thighs in disposables. (Imagine Disney World turkey leg. I’m surprised she still has legs we nom on them so often.) We have to accommodate the extra girth by loosening the waist. She is having massive blowouts. She also has terribly sensitive skin. We actually used gDiapers when she would get rashes as a newborn but ran into the thigh issue before she was out of small. So we decided to stick with ‘sposies for a while and then we got poop all over the house. Fail.

What cloth diapering system would you recommend for her delicious thighs? I know Fuzzibunz has the adjustable leg and waist, but they left terrible red marks on my son’s regular toddler thighs and I’m a bit nervous to use them with the new baby.

Oh, those thighs are my most favorite thighs. Sadly, they were so fleeting for us. My babies were all underfed turkey legs at first, then would plump up all deliciously for a few months and then stupid “milestones” and “mobility” and “toddlerhood” came and leaned them out again before we knew it.

Because my personal experiences with chubby thighs were pretty short, I admit I did a bit of poking around cloth diaper forums to see if there was any consensus among other (more experienced) moms, or if there was some cloth diapering system that I haven’t personally tried that was the  most recommended.

Surprise, surprise: After 10 short minutes of reading I had to back away, completely overwhelmed by FIVE BAJILLION DIFFERENT CONFLICTING RECOMMENDATIONS, along with a slew of unfamiliar brands and acronyms, like a total cloth diapering n00b.

(Is this why I get so much cloth diapering email? Have I become the “eff THAT, I’ll just ask Amy” panic button for people after they visit forums or comment sections? If so, who can I email? Because gaaaaaahhhhhhh.)

Ezra was a super-chub for a few months (probably age two months to seven), and I used medium-sized Fuzzibunz that I bought after consulting their online weight chart. They had a line of snaps for the waist and another for the thighs, and I never had any problems with them. It’s possible your two-year-old was just too close to the upper weight/size limit for them and that’s why he got marks. (And slightly off-topic, I firmly believe some diapers TOTALLY inflate the upper number. I’ve tried some one-size diapers that claim to fit up to 35 pounds and Ike has COMPLETELY outgrown them already, at 26.5 pounds. He’s not particularly chubby, either. Just super solid, but overall quite proportional in thigh/butt/belly size.) The snaps on OG Fuzzibunz are nice because you can go super-loose on the thighs but still cinch them tightly around the belly (or vice-versa if your baby is all belly and not so much in the legs). Other pocket diapers, like bumGenius, can only be adjusted around the waist and rise, so you might not love them if there’s a big difference between waist and thigh proportion.

I do own some of the one-size Fuzzibunz, which are the version with the adjustable leg elastic. THOSE I’ve had nothing but problems with. I was never able to figure out the right setting and was far too impatient to be messing with the elastic and those infuriating buttons as often as I was. (Picture the adjustable waists on your toddler’s pants, that you usually only have to set once. Now picture elastic half that size, with a super tiny button hidden in a tiny hole, on two sides, that you have to change every time your baby gains any weight.) Plus, the hidden button quickly became not-so-hidden on my diapers after a few washes as the fleece stretched (and even ripped, in a couple cases), and the button would leave a red mark on Ike’s leg. Blech. Pass.

Another one-size diaper that I did see mentioned quite a bit on the Forum of Way Too Many Options was Mother-Ease One-Size (MEOS). After looking at them online I’m not seeing anything super amazing about the snap placement (it’s similar to Swaddlebees, with two rows of snaps — but the snaps on the diaper’s tabs are lined up evenly, so I don’t see a way to make the belly/leg adjustments all that different). But what I DO see is some super gentle and soft-looking fabric around the leg openings instead of elastic. Which probably gives them high marks in NOT leaving red marks. Note, however, that MEOS require a waterproof cover, and if your COVER doesn’t fit great around the thighs, you can basically still have the same problem.

But now that we’re talking two-step systems with covers, I gotta at least bring up the idea of prefolds with covers. A prefold with a cover lets you completely customize the size (and absorbency) of the guts of the diaper AND the size of the outer shell. (And yes, you have approximately 2407345834870 different options for the shell.) But I think testing out a variety of covers is an easier (and cheaper) process than trying out a variety of expensive, completely different diapers that might not be all that interchangeable with each other.

An investment in a dozen Green Mountain Diaper prefolds, on the other hand, is something you are very unlikely to regret (and won’t break the bank in the first place). From there, you can experiment with finding the perfect fit: Fold around your baby and fasten with a Snappi, or simply fold the diaper in threes and lay it in your preferred cover. . Very little fuss and no elastic pinching around the thighs. GMD also sells a “wide” diaper (in the medium size, for 14+ pounds) that might be worth checking out, since it’s designed for babies who outgrow the smalls in width but not in the length/rise. I briefly debated getting some for Ike, but he thinned out once he started crawling and the regular mediums fit him fine.

(For the record, we never bought any new prefolds after the medium size. Mediums STILL fit him at 26.5 pounds, especially since we mostly use them tri-folded instead of fastened. The GMD Workhorse Fitteds, on the other hand, required us to move up to a large a couple pounds ago. But I love them and they’re so budget-friendly so that I totally didn’t mind.)

Prefolds, like the MEOS, mean you still have to find the perfect fitting cover. But a lot of covers are cheaper to try than a full diaper “system” with insert, and even a not-perfect cover will come in handy in a laundry or diaper-bag pinch.

The GENTLEST on little thighs will always be wool or fleece, since they don’t use any elastic around the leg holes. But alas, I have no specific recommendations here. I bought some underwhelming fleece covers on Etsy — had a terrible time getting the right fit, as fleece doesn’t have much “give” and Ike outgrew them so fast I never grew to love them. And the ones I received had itty bitty leg holes and gapped at the waist if I double-stuffed the diaper. (If you have some sewing skills, though, you can find a lot of free or inexpensive patterns out there on The Google and measure your baby for a customized fit.)

My wool experiences were MUCH better — I looked for soakers made out of recycled wool sweaters, with an extra layer of felted wool in the wet zone, and bought a couple reasonably priced ones (NOT the cheapest — you get what you pay for, y’all) in colors/patterns that I liked. We’re still using them at night (over a double-stuffed gDiaper, or a GMD folded around hemp or microfiber doublers), as wool gives and stretches so nicely. I don’t even remember the original weight limit on these covers but I’m sure we’ve technically exceeded it. I wash them about once a month, lanolize every other wash or so. BUT…the shops I bought them from have all since closed or stopped selling soakers. BAH. I believe Disana are supposed to be wonderful — pricier than the WAHM-made ones but since you can reuse a wool cover a lot before washing (just air it out; the wool is naturally antibacterial and won’t retain the odor) and they have a lot of grow room, you can invest in just a couple of them and assure your brain that it’s a worthwhile splurge.

Other excellent waterproof covers are bumGenius Flips, Thirsties and Bummis. Swaddlebees makes a cover too, though I haven’t tried it. Looks ADORBS, though. So. Yeah. These all have (covered) elastic around the legs but are lightweight and super-adjustable so you should be able to prevent leaks WITHOUT having to fasten them too tight. I’d buy a sampling and try them out — remember there’s always Craigslist or online swapping for your cast-offs!

Commenters? Any secondings of any of these brands or additional recommendations? Or would anyone simply like to come up with different poetic descriptions of those inimitable Stay-Puft rubber-band baby thighs?